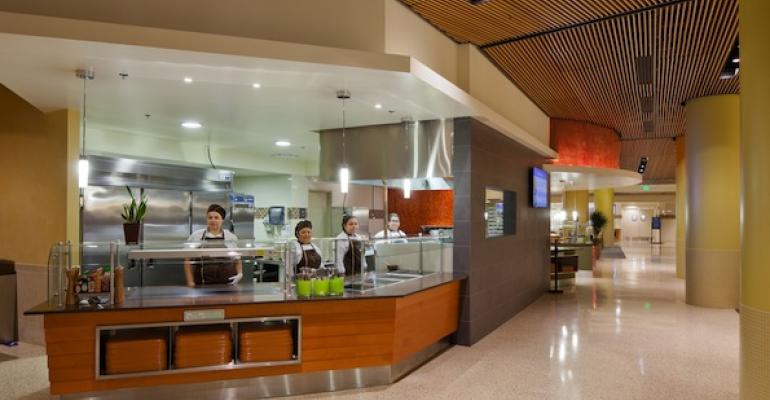 UCLA Steps Up to the Plate With Health Themed Dining Hall

A fifth of the food at new eatery is sustainable and/or locally sourced.

When UCLA opened FEAST at Rieber a little over two years ago, it made a big splash as the first all-Asian multi-station dining hall on a college campus. Among its plaudits was an FM Best Concept Award for Best Menu.

Now the school is at it again with the debut of yet another specifically themed multi-station venue: Bruin Plate, which features only dishes deemed healthy and which emphasizes freshness, sustainability and scratch production.

“With the additions, we grew from around 10,000 to almost 12,000 residents,“ he explains. “Because of a decision made many years ago to set aside a corner of the campus for the residential community, it is rather tightly knit geographically. You can literally walk across all of it in about 10 minutes. That means resident students can easily go to any dining hall, so having them all serve the same menu doesn’t make sense for us. With FEAST at Rieber and now Bruin Plate, we’re offering different and appealing dining options. They are like destination restaurants with unique menus.”

Bruin Plate is now competing for the status of most popular dining hall on the UCLA campus. Dinners average 1,800 to 1,900 customers while lunches are in the 1,200-1,500 range. (Breakfast service, which was launched later, remains in a development stage with 350-400 customers on an average day.)

Ansel says that the prospect of Bruin Plate cannibalizing business from other campus eateries is not a concern. In fact, he says it’s a benefit because those venues were becoming overcrowded, especially with the new housing facilities adding extra students to the resident population that must be served.

Bruin Plate’s concept was developed following a year of surveys and focus groups to determine which themes students would prefer.

Part of a larger program called the Healthy Campus Initiative that calls for serving food that “makes the healthy choice the easy choice,” Bruin Plate is designed to remove the temptations that sometimes steer students away from making good choices despite good intentions.

“Say you walk into a dining hall and you see both an orange and a nice chocolate muffin,” Ansel explains. “It can be hard to choose the orange. Here, once you walk in the door, all the food is very fresh and very healthy and we’ve removed the temptation of choosing something that may be appealing but is also less healthy.”

That hardly means there is no appeal to the choices at Bruin Plate. Just the opposite, in fact, as the venue downplays the “food that’s good for you” approach in favor of a “food that is flavorful” message.

“You desire the food because it is good looking and delicious, not necessarily just because it’s ‘healthy,’” Ansel says.

Whatever the station, though, the dishes emphasize produce and grains, not the traditional center-of-the-plate proteins.

“We focus more on the quality of the vegetables, on whole grains and on using lean meats as more of a garnish than as the main ingredient,” says Dolores Hernandez, nutrition education coordinator for UCLA Dining.

A fifth of the food served at Bruin Plate consists of locally-sourced produce and meats from nearby farms, along with sustainable seafood, unprocessed/preservative-free items, organic foods and cage-free eggs. That 20% threshold for sustainable ingredients is a goal set out by the University of California system and Bruin Plate is the first venue at UCLA to fully meet it. The entire UC system is expected to hit the target by 2020.

So what won’t you find in Bruin Plate? Try college dining standards like french fries, traditional desserts, commercial sodas, cured meats and heavily processed foods. Students looking for these kinds of items can find them in other campus dining locations, but not at Bruin Plate.

UCLA’s culinary team worked for six months to come up with a list of more than 400 unique recipes that would fit Bruin Plate’s theme. They were then tested out at the school’s Hedrick Test Kitchen, where up to a thousand students a night were served. That generated extremely positive feedback, Ansel says.

Bruin Plate’s executive chef, Kevin Aiello, says roasted vegetables, especially roasted Brussels sprouts and squash, have been huge favorites in the early going. Among entrees, the bison burger at the Simply Grilled station is a big hit. It is served in a number of unique ways, such as with blackberries and pickled onions on a slider bun. There’s a lean  roasted tri-tip steak stacker on fresh-baked beet bread, topped with a horseradish-flavored goat cheese spread, golden beets and fresh baby arugula.

Breakfast, meanwhile, has been given an unusual twist with dishes such as a savory polenta French toast with an apple, pear and cranberry compote.

The compotes and spreads that adorn the breakfast menu are all made from scratch. “We even make our own nut butter, peanut butter and cashew almond butter,” Aiello says.

The pizza station, Stone Fired, is rebranded as Toast in the mornings and features European style breads (made on the premises) with the different spreads.

A lot of the preparation is done in front of customers—to order dishes are more or less the norm—but Bruin Plate is supported by a “hotel-sized kitchen” behind the servery where pre-prep is done in an operationally efficient manner.

Ansel admits that the approach used at Bruin Plate inevitably means higher food and labor costs given the premium ingredients and from-scratch cooking approach. He says the department copes by balancing the eatery’s higher costs with other platforms such as grab and go lunches and a study hall at night snack program, where costs are lower. “We manage it like a portfolio,” he says.

Another potential cost factor is Bruin Plate’s status as an all-you-care-to-eat dining hall, a model has traditionally driven up costs through food waste. However, that is being controlled in a number of ways. Suggested serving sizes buttressed with the appropriately sized serving ware and plates keep students aware of how much they take.

“Also,” says Hernandez, “you have to remember that the students who choose to eat at Bruin Plate are already predisposed to dining in a more healthy way and so they’re less likely to take more than they want to eat.”

That choosing-to-eat-healthier factor has resulted, at least in the early going, in a customer mix that skews heavily female but “the smarter guys are starting to figure that out and so they’re now coming here too,” laughs Morales.

Located in the new Carnesale Commons in the Sproul Court complex, Bruin Plate opened last October to resident students from nearby housing complexes, then expanded to other residents. It finally opened fully to all comers at the beginning of this year.