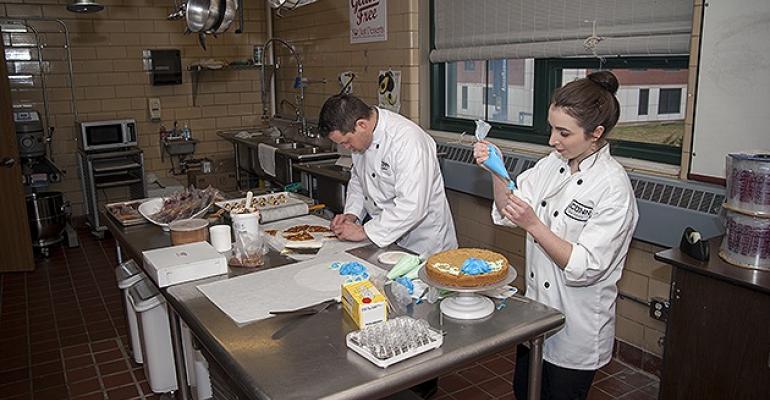 A production kitchen in an unused space is now supplying specialty baked goods across campus.

The University of Connecticut (UConn) had already been lauded for its commitment to students suffering from allergic reactions to gluten. For example, the school was named No. 1 on a list of the Top 10 Gluten Free Accommodating Colleges last year.

Now they’re kicking it up a notch by opening what the school characterizes as the first dedicated gluten-free bakery on a college campus in the U.S. Located in a former test kitchen in UConn’s Trumbull Towers residential complex, it is already turning out about 4,000 items a week for use in residential and retail dining locations, as well in catering.

“We’ve always done gluten-free in our kitchens, but for baked goods we’ve had to bring in wrapped brownies, cookies, pies and so forth from certified gluten-free bakeries,” explains Culinary Manager Rob Landolphi.

“We had this little kitchen, a test kitchen from years ago, that was just sitting there and we were trying to decide what to do with it as we had moved our test kitchen to a larger facility. And I said, ‘You know, if you look at the volume of gluten-free baked goods we’re starting to go through, we could put a gluten-free bakery there and produce a product for our residential dining facilities and cafés and catering, and I bet we could do it with just one pastry chef and a student and see where it goes from there.’”

UConn Dining Director Dennis Pierce loved the idea and said, “Go for it.”

Now, instead of purchasing frozen product from outside, the kitchen is producing items like brownies, chocolate chip cookies, snickerdoodles and Rice Krispies-like treats, all individually packaged with the department’s special gluten-free label. Other products include cranberry and blueberry muffins, cupcakes and birthday cakes. There are even plans to add pies for the holidays later in the year.

Currently, the bakery only supplies the UConn campus, but Landolphi hopes to add a bakery case with the gluten-free products to the Le Petit Marche café in the UConn co-op in downtown Storrs, where members of the public can buy them as well.

Cost is not a detriment.

“If you look at what it costs us to produce the product versus buying premade, I think it comes in slightly less but we can offer more variety and fresher, and that’s the key,” Landolphi says. “If you look at the prices of some of the premade gluten-free products, they’re pretty high, so we figured, with one baker and the food cost, this is a win-win for us.”

He adds that the volume requirement is expanding.

“In 2002 when we started, I think we had two students on meal plans who requested a gluten-free diet, and now we have well over 400 that we know of—plus the commuters we don’t know of that are eating gluten-free in our facilities. When we ran the numbers for the gluten-free baked goods we were bringing in, we couldn’t believe how much we were going through.”

To lay out the new bakery operation, most of the test kitchen equipment was removed and new equipment installed. That included a double-stack convection oven, 30-quart mixer, microwave, prep sink, stainless-steel worktable, packaging machine, standup refrigerator and freezer units and shelving. Also the two-bay sink was replaced with a three-bay unit. Some of the equipment was on hand from other campus dining facility shut downs and conversions that had been retained in storage, and that helped reduce costs. The mixer and convection oven were new.

The biggest culinary challenge was finding the right flour.

“We did a lot of cuttings of flours and blends to find the right ones over the last six to nine months, then narrowed them down with taste testings, even with people who don’t eat gluten-free,” Landolphi says. “We figured if they couldn’t tell the difference, that was what we wanted to go with.”

The pastry chef for the operation is Kristina Breuninger, who was already on staff and is herself gluten intolerant. “So she already had a great foundation for this as she’s already lived it,” Landolphi says.

Since the gluten-free bakery is in a separate location from UConn Dining’s main central production kitchen, there’s almost no chance of cross-contamination from other production operations. The products are delivered to that location’s warehouse for cross-docking three days a week.

The bakery currently turns out about 1,500 brownies a week, a thousand chocolate chip cookies, about 800 snickerdoodles and 800 Rice Krispies-like treats and 400 to 500 muffins.

“This spring was a good time to start because we wanted to see what the numbers were and how our production was going to be,” Landolphi says. “We only have a few more weeks of school, but we’ll continue to produce over the summer for our open units because we have a lot of camps and conferences. Then, come the fall, it’ll probably be crazy.”