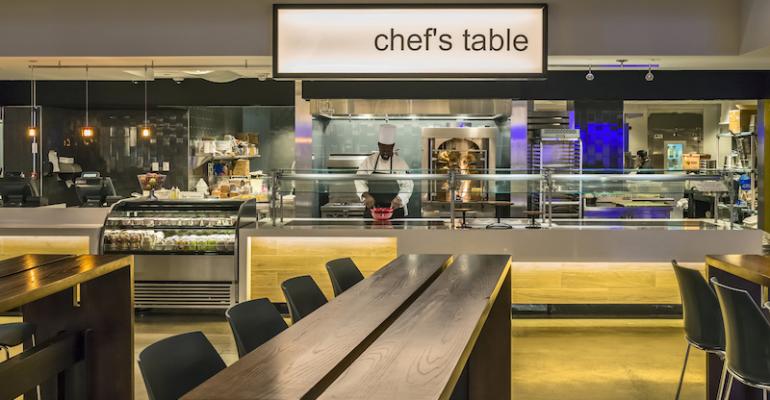 <p>All UMass retail and residential dining locations, including the newly renovated Blue Wall complex, will be affected by the policy change on chicken.</p>
News & Trends

UMass commits to all antibiotic-free chicken

Initiative expected to involve some 750,000 pounds of poultry annually.

Beginning in September, the University of Massachusetts Amherst Dining Services pledges to serve 100 percent, no-antibiotic-ever chicken in all of its retail and residential operations. The school said in its news release announcing the move that it is one of the first universities and the largest college and university foodservice program in the country to make this commitment. UMass is partnering with with vendor NatureRaised Farms on the initiative.

The decision was made following a student survey last spring that indicated significant interest in responsible food sourcing among the student body. Currently, chicken is the leading protein source at UMass Amherst.

In fiscal year 2015, UMass Dining began sourcing local, no-antibiotic-ever chicken and turkey, purchasing more than 30,000 pounds, and this new initiative is expected to bring that to more than 750,000 pounds annually.

“Switching to no-antibiotic-ever chicken is the right thing to do,” said Ken Toong, executive director of Auxiliary Enterprises, in the press release. “Not only are the students demanding it, but as the largest campus dining operation in the United States, we wanted to take a leadership role in the foodservice industry by making this pledge. We appreciate the support from Tyson Foods and we will continue to source healthier and more socially and environmentally responsible ingredients for our customers.”

The largest campus dining program in the nation by revenue, UMass Dining serves 45,000 meals per day and 6 million per year at four residential dining commons and over 30 retail locations around campus. More than 18,000 students hold meal plans.