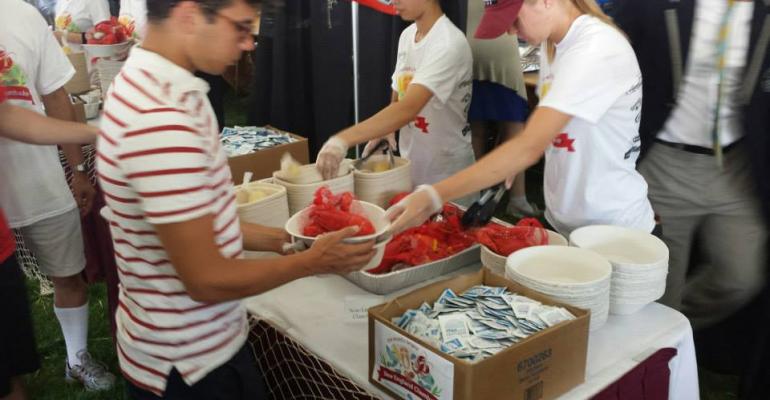 Over 3,000 lobsters and 6,000 littleneck clams served in about two hours on Labor Day.

Chefs at the University of Massachusetts Amherst have set a new Guinness World Record, the school's fifth in five years, by serving 3,003 New England clambake dinners with all the trimmings in about two hours at the Labor Day barbecue that celebrates the return of students to the campus.

Among goals for attempting this world record, says Ken Toong, executive director of auxiliary enterprises, are supporting the resiliency of the New England food system by using as much locally sourced food as possible, promoting healthy eating, showcasing regional cuisine, creating excitement for the new school year and building connections in the campus community.

More than a hundred pots of water were brought to boil and steam for the Welcome UMass Amherst Barbecue that ran from approximately 4:30 to 6:30 p.m. At around 6:15, adjudicator Philip Robertson from Guinness World Records certified that no pre-cooked foods were used, and verified the number of meals served to set the record. There was no previous record of largest New England clambake to break, but Guinness officials had set a minimum bar at 1,500 clambake meals in eight hours.

Christopher Howland, Auxiliary Enterprises director of purchasing and marketing, says each UMass Amherst Dining Services’ world record has been fully supported by donations and sponsors, and this year’s total sponsorship at over $70,000 is the most ever raised.

Over 3,000 lobsters averaging 1.25 pounds apiece, 6,000 little neck clams and 3,000 steamers were supplied at cost from New England fisheries and the Massachusetts Lobsterman’s Association. Hundreds of pounds of potatoes plus ingredients for a fresh Asian slaw salad came from Pioneer Valley growers. A cranberry-apple crisp dessert from Massachusetts fruit growers topped off the meal. Peet’s iced coffee was also served.

Meals were made to order, making this a no-waste event. Lobster shells will be composted, as will compostable plates and flatware used during the event.

“This event allows UMass Amherst to promote sustainability and healthy eating, allows us to showcase regional cuisine and helps build important connections within the UMass campus community," Toong notes. "Not only that, it’s fun, and the crowd gets very excited with anticipation at the end, when we’re waiting for the official announcement of our success.”

For those who do not eat seafood, a barbecue offered a blended beef-and-mushroom burger, barbecued chicken, veggie burger, clam chowder, grilled salmon salad, corn on the cob, salad and dessert.