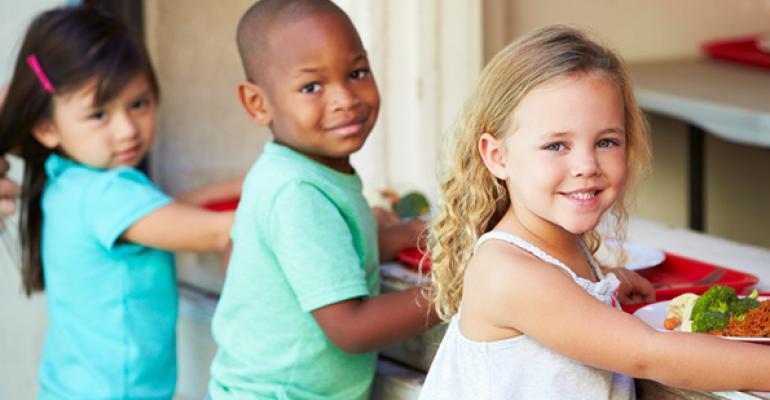 Schools will no longer be allowed to advertise foods that do not meet nutritional policies set forth by Smart Snacks.

Child nutrition reauthorization for 2015 (yes, that is the correct year) may still be up in the air, but the USDA has today finalized four rules set by the last reauthorization, the Healthy, Hunger-Free Kids Act. The four rules regard Smart Snacks, local wellness policies, Community Eligibility Provision (CEP) and administrative reviews.

One of the main clarifications that came out of today’s final rules is that schools can no longer advertise foods on school premises during the school day (the midnight before to 30 minutes after the end of the official school day) that do not meet the nutritional requirements specified under Smart Snacks. This was included in the interim final rule; however, USDA today clarified the rule as stated above.

Some other changes to Smart Snacks rules are:

Modifications to definitions:
• Add the term “intended as a main dish” to the definition of entrée;
• Adds the term “grain-only” for breakfast entrees (operators can determine which items are considered a breakfast entrée item, making it allowable to have a grain-only item as an entrée); and
• Adds a definition of “paired exempt foods,” i.e., prepackaged snack items that pair items together (these items retain their individually designated exemption for total fat, saturated fat and/or sugar when packaged and sold together. They are also required to meet the designated calorie and sodium standards).

A few other changes add a specific exemption to the total fat and saturated fat for eggs and a modification to the general standards for canned vegetables to exempt low-sodium and no-salt-added vegetables with no added fat to better align with USDA Foods standards and industry production standards.

The USDA is asking for further comment on total fat rules. “In particular, comments are requested on whether the standard for total fat should be eliminated given that there will continue to be standards in place for calories, sodium, saturated fat, and trans fats which will limit unhealthy fats. Comments are also sought on whether the total fat standard should be maintained but should exempt certain food items. While the total fat standard as currently implemented will continue to be in place, this single, individual standard remains an interim final standard,” the USDA asked in its final rule.