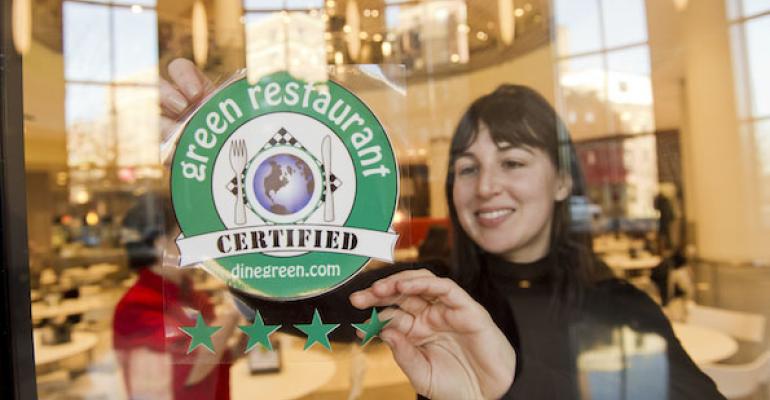 Waste Is a Particular Thing to Mind at Boston U.

School boasts not one, not two, but three 4-star Certified Green Restaurants, while commencement is a zero-waste event.

When Boston University opened its spectacular Marciano Commons two years ago, it not only replaced three aging dining halls but also put itself near the forefront of the sustainability movement on America’s college campuses. That’s because included in Marciano are three venues—a dining hall, a bakery and a late-night restaurant—that are all 4-star Certified Green Restaurants (CGR), the only ones, reportedly, at a university. (There is also a 3-star CGR food court elsewhere on campus.)

Marciano Commons achieved its 4-star CGR rating with touches like variable speed fans around the building and dish machines that automatically vary water usage for greatest efficiency. They also employ a heat recovery system that uses steam generated by the machine to heat water.

The dining mix includes an exclusive vegan station for lunch and dinner as well as an exclusively gluten-free station and a self-serve kitchen for those with food allergies. Indeed, a fifth of the entire menu is vegetarian or vegan.

Along those lines, Marciano conducts a Make a Difference Monday each week when the menu eliminates beef and pork dishes and focuses instead on local or sustainable products including local seafood.

To reduce the alienation factor on these days, the Marciano dining team makes sure to include popular comfort food type choices such as vegetable and bean burritos, bean nachos and eggplant parmesan to the menu mix.

It’s all part of fulfilling the AASHE (Association for the Advancement of Sustainability in Higher Education) pledge the university made to serve 20% sustainable food by 2018. The figure is at around 14% now. In this context, “sustainable” is defined as food made with local ingredients along with specific products like cage-free eggs and Fair Trade coffee.

Much of the dairy products used at BU are locally sourced, as are some grain products like wheatberries and barley. Produce is purchased from local sources as much as practical in the Northeastern climate. The school is working with dining services provider Aramark to connect with local growers, and Aramark also tries to engineer the menu to take advantage of local product as much as possible.

But the CGRs are not the only signs of strong green commitment at BU. Dining venues across campus compost organic waste. At Marciano Commons, there is a pulper system that transports food waste from three floors, using a gray water system that mixes the food waste into a slurry. A centrifuge then removes up to 95 percent of the water from the mixture, which is compacted and sent to a site some 40 minutes from campus that supplies customers all over the Boson area with compost.

In the CGR 3-star food court, which features such national brands as Panda Buffet, Pinkberry and Starbucks, almost all the disposables used a compostable and all cleaning products are “green” to mitigate environmental impact.

BU is proud to note that its efforts have reduced waste hauling requirements from six times a week to one while diverting some 800 tons of waste a year from landfills.

Good thing, too, since come this October all institutions in Massachusetts generating more than a ton of organic waste will be required to divert it from landfills.

In addition to the commitment at Marciano to composting food waste, all staffed events catered by BU’s dining department are zero-waste, meaning that compostable and recyclable materials are sorted out to minimize trash.

The biggest zero-waste event on the annual calendar is the four-day commencement weekend festivities each spring. This year, commencement drew some 67,000 people to the campus and included catered receptions ranging from 40 to 5,000 guests. Over the course of the weekend, BU diverted around 30 tons of organic waste and recyclables from landfills. One event for 3,500 people that was audited produced less than 20 pounds of trash.