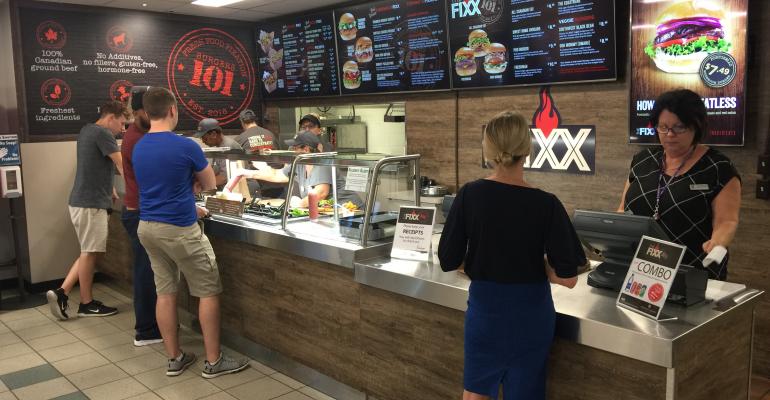 Western University builds a better burger with its own brand

By the spring of last year, Western University in London, Ontario, was having a serious problem with its Harvey’s branded burger unit, one of its venerable campus dining locations. A staple of the Centre Spot Food Court, the university’s largest retail dining operation, Harvey’s—one of Western’s first franchised concepts and a hamburger staple on campus for over 21 years—was going stale, with annual sales plummeting from nearly $371,000 five years ago to less than $307,500 in the 2017-18 school year.

Clearly, something had to be done, and simply franchising another outside chain brand wasn’t it because the university had already made a commitment to reduce its franchise footprint on campus, especially franchises with a food component that could easily be replicated. With that in mind, the decision was made to make a change at Harvey’s by creating a unique grill concept in-house.

Thus, was the idea of The FIXX born as the hospitality services team came together to create a unique brand with a menu that combines new items with some menu staples retained from the old franchised unit, and then supplemented them with multiple limited time offers (LTOs).

Among the advantages of this approach, as opposed to having a preconceived franchise brand, is that it is able to respond to food trends and customer preferences by easily modifying its menu options. It can also adjust menus to focus on clean, healthier foods, including plant-based and it can introduce more vegetarian or vegan offerings without having to deal with franchise restrictions. The concept also has available a large choice of fresh toppings and sauces that can be adjusted seasonally.

Still, jettisoning a campus institution is never easy. Although Harvey’s revenue had been declining over the years, it was felt that the Western clientele would still need time to get over the loss of the iconic brand.

“We knew that revenues would not exceed the previous year’s numbers, but we were quite certain the costs associated with operating the unit would be much less and profitability much higher,” says Kevin McCabe, associate director of hospitality services. “As the brand builds, revenue will follow.”

Cost savings derived from a combination of factors ranging from no longer having to pay franchise fees or royalty payments and directly receiving rebates on products purchased to deriving reduced labor costs from a simplified menu.

To develop its new menu items, the team visited practically every burger concept in and around London and tested and sampled new products from multiple suppliers.

“Our main objective was to find a great-tasting burger, preferably local and sustainable,” McCabe says.

They settled on a local company whose burgers are made from 100% Canadian ground beef with no fillers or additives and is hormone- and gluten-free.

To prepare the burgers, the team decided on a double platen grill that heats from both the top and bottom, a much quicker cooking process that results in a superior product. This state-of-the-art technology allows chefs to cook less product more often for consistently fresh burgers.

The concept name came from a preselected list of 10 possibilities presented to students for a vote and The FIXX was chosen by twice as many students as any of the other nine.

A local graphic designer worked with the dining team to develop the logo as well as menu boards, artwork for advertising LTO specials, uniform designs incorporating fun slogans, promotional campaigns and even some wall art.

Western currently has a student population of approximately 32,000. Its self-operated hospitality services foodservice arm completes more than 30,000 transactions per day in 23 retail and seven residential dining operations. The Centre Spot Food Court is its largest retail operation, with five branded concepts plus a soup and salad station and a busy grab-and-go program.