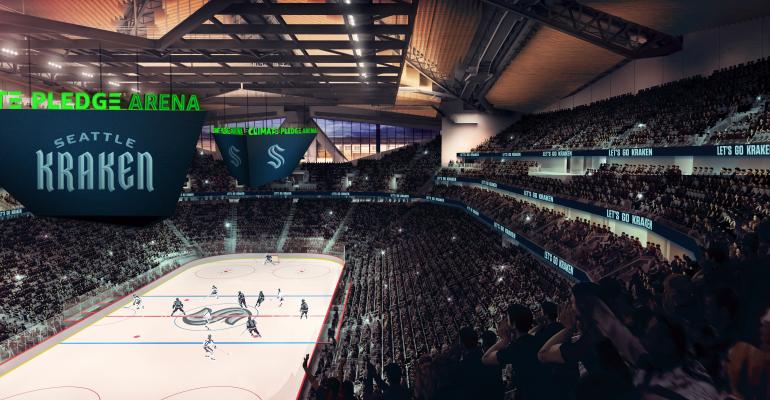 The opening of the newest venue, Climate Pledge Arena in Seattle that is home to the newest NHL franchise, the Seattle Kraken, is the first-ever net Zero Carbon certified arena in the world.
News & Trends

Food & beverage providers have some new treats for NBA and NHL fans for the two leagues’ 2021-22 seasons.

Concessions operators at NBA and NHL arenas are rolling out new menu items and service platforms to accommodate fans coming to the venues for the 2021-22 season in each winter league. Highlights include…

• the opening of the newest venue, Climate Pledge Arena in Seattle that is home to the newest NHL franchise, the Seattle Kraken, and which is not only the first-ever net Zero Carbon certified arena in the world but boasts a dining concept mix from concessions operator Delaware North that features curated vendors, local ingredients and partners that capture the spirit of the Pacific Northwest;

Related: Sustainability remains a priority despite the pandemic

• Delaware North will also be operating concessions at UBS Arena on Long Island, new home of the NHL’s New York Islanders starting Nov. 20, where it will operate with what it describes as a distinctively “New York” flavor that includes partnering with an array of New York Metro area food providers and brands such as Mighty Quinn’s Barbeque, Milk Bar, Blue Line Deli & Bagels and Sausage King of New York;

• The Barclay Center home of the NBA’s Brooklyn Nets in partnership with global restaurant company Major Food Group debuted its newest premium lounge, the 7,700-square-foot Crown Club, located just steps from the basketball court and easily accessible from the best seats in the house, that has been reimagined as a grand residence complete with a living room, dining room, an intimate salon and a fully stocked pantry;

• also at the Barclay Center, concessions operator Levy is bringing in local vendors to run stalls for a limited engagement in the new Brooklyn Market section, with different local vendors rotating through every six-to-eight weeks throughout the season, starting with lobster roll concept BK Lobster, dumpling concept Destination Dumplings, Ghanaian plantain concept Kelewele and, most notably, School Grounds, which is operated entirely by students from the Food & Finance High School.

• Levy also operates at the Enterprise Center in St. Louis, home ice of the NHL’s St. Louis Blues, and at the United Center in Chicago, home of the NBA’s Chicago Bulls and the NHL’s Chicago Blackhawks, and it has debuted some new concepts and menu items at these locations

• At the Chase Center in San Francisco, Bon Appetit Mgt. Co. debuted two new eatery concepts, Room For Dessert and Splash Wine Bar, along with more than 50 new menu items across all of its eateries and the full-service restaurant Modelo Cantina, plus a new set of signature specialty cocktails for the new Golden State Warriors NBA season

• At Little Caesars Arena in Detroit Delaware North debuted two new restaurant concepts, The Mixing Board and PointsBet Sports Bar, that were developed for spaces previously occupied by year-round restaurants, each with a street-side entrance for event and non-event days;

• Aramark, which partners with nine NHL and NBA teams, has developed a variety of menu items featuring perennial favorite ingredient cheese, with a resultant line-up of mac and cheese, perogie and pretzel fries selections, while expanding concessions offerings at AT&T Center in San Antonio, SAP Center in San Jose and Wells Fargo Center in Philadelphia to include some of its favorite proprietary concepts and local partners and expanding the presence of contactless ordering and checkout at all its venues.