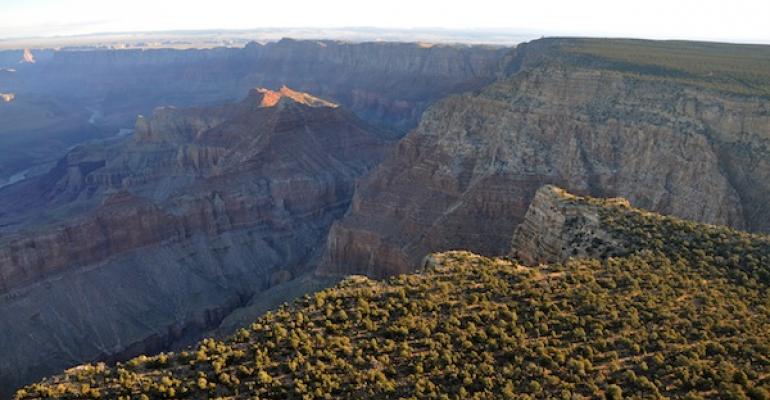 Xanterra Parks & Resorts has reached a one-year deal with the National Park Service that will keep operations at the Grand Canyon's South Rim open. Xanterra's current contract was set to expire at the end of this year and the NPS had been unable to secure a deal with a new contractor despite a number of adjusted RFPs.

“We are pleased to reach an agreement with the National Park Service to continue operating visitor facilities and services at the South Rim of Grand Canyon National Park under a temporary contract,” says Xanterra President/CEO Andrew Todd. "This will allow the hundreds of Xanterra employees to continue providing outstanding, uninterrupted hospitality to the millions of travelers who visit this national treasure each year. It is our hope that this temporary contract will allow the National Park Service time to go back to the drawing board and develop a more palatable concessions RFP because despite the fact that the contract generates more than $1 billion in revenue over the contract term the past RFPs have failed to allow the concessioner to generate a profit after paying fees to the National Park Service and funding capital expenditures in the park facilities.”

The Fred Harvey Co., which Xanterra (then known as Amfac) acquired in 1995, has operated concessions at the Grand Canyon since 1905, first in partnership with the Santa Fe Railway and later under a series of contracts with the National Park Service after Grand Canyon National Park was created in 1919. More than 300 structures accounting for much of the infrastructure in the historic Grand Canyon Village were developed by the Harvey Co. and its succesors over its 110-year history at the park.

The investment, totaling some $200 million, must be reimbursed to Xanterra by any company taking over the contract. Not surprisingly, that had put off bidders other than Xanterra, so, to mitigate that obstacle, NPS last year allocated $100 million to pay down the investment and make the contract more attractive. In addition, NPA also split the contract and awarded the smaller piece to Delaware North Parks & Resorts earlier this year.

Xanterra's suit claims that the pay-down is in effect a subsidy to competitors for the contract. It also objects to the way employee housing accommodations were divided following the splitting of the contract.