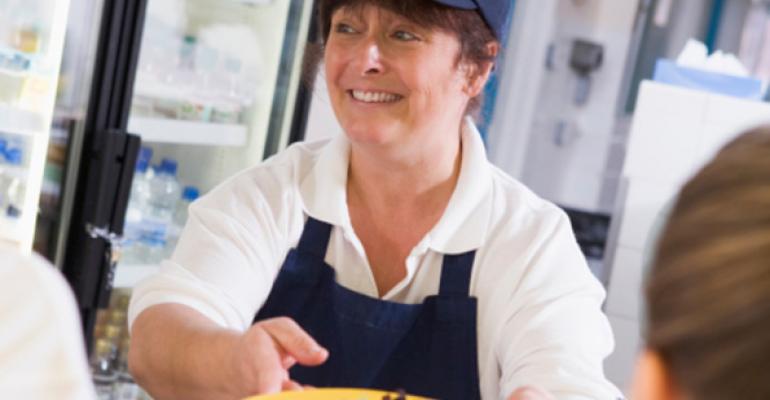 Once again it’s child nutrition reauthorization time, and it’s also the first since the monumental Healthy Hunger-Free Kids Act (HHFKA) was passed in 2010. The HHFKA touched just about every aspect of school nutrition programs, and with the change of power in Congress and a new election season starting shortly, many in the industry are wondering what exactly is going to happen with reauthorization this time around.

That uncertainty compiled with a healthy dose of frustration over federal regulations brought record numbers of attendees to this year’s School Nutrition Association (SNA) Legislative Action Conference (LAC) in Washington, D.C. The number was just shy of 1,000, at 918.

Just before SNA members lobbied Congress, Senator John Hoeven (R-ND) addressed the crowd. Hoeven was instrumental in getting changes put into the FY15 Omnibus Appropriations Bill, which provided temporary relief from whole grain and sodium requirements. Those provisions only last for one year, however, and Hoeven told the LAC crowd that he had already planned to introduce the Healthy School Meals Flexibility Act, which would make those provisions permanent. (The changes would require only 51 percent of grain items be whole grain rich instead of 100 percent and would keep sodium reduction at level one instead of further reductions.)

“You can have a general approach that emphasizes a healthy approach…you can’t do it the same way every time and every place,” Hoeven said. “We have to give you the flexibility to do it right.”

Getting salty
Speaking of sodium, LAC kicked off with a presentation from Dr. Robert P. Heaney, clinical endocrinologist specializing in nutrition from Creighton University. Heaney received a standing ovation after sharing his compilation of research that shows that there was no evidence of healthy benefits of further sodium reductions beyond target level one. He said there were actually adverse health risks at both ends of sodium intake (too make and too little) and that if a person doesn’t have adequate sodium intake, you can’t maintain blood pressure.

Perhaps the point of Heaney’s presentation that received the biggest applause was the research that showed that reducing sodium to target levels two and three would actually make it impossible to provide a nutritionally sound diet because other nutrients, most notably calcium and potassium, cannot be met with that low of a sodium diet.

Heaney also pointed out that a 2013 report from the Institute of Medicine, the organization from which the Dietary Guidelines for Americans and the nutrient guidelines, including sodium, in the HHFKA were derived from, stated that there was no evidence of health benefits of reducing your daily sodium intake below 2,300 milligrams.

Heaney said that point, coupled with the fact that no studies in the past four years have shown that reducing sodium to levels two and three have health benefits, should be used as “ammunition” to get further sodium reductions permanently eliminated.

As usual members of the USDA updated LAC attendees. The big update this year was the release of the final rule regarding professional standards for child nutrition professionals. For the most part, the final rule mirrored the proposed rule with a few exceptions. Here’s a quick look at some of the regulations regarding training and hiring requirements, which go into effect July 1, 2015:

•    The final rule eliminates one of the local educational agencies (LEA) or district sizes, reducing the number to three (the eliminated LEA had the same requirements for a smaller LEA, so the largest LEA was combined in the final rule for clarity. The three LEAs are 2,499 students or less, 2,500 to 9,999 students and 10,000 or more students.

•    The number of hours of annual training was also reduced in the final rule. All directors must have at least 12 hours of continuing education/training each year, beginning with the 2016-2017 school year. For 2015-2016, directors need only eight hours. Managers must have 10 hours, six hours for 2015-2016. All other staff must have six hours, four hours for 2015-2016 and part-time staff must have at least four hours regardless of the number of part-time hours worked. If an employee is hired Jan. 1 or later, he/she must only complete half of the required training hours.

•    There were some changes in the minimum hiring requirements for directors as well. (Note: These are the changes only. See the entire list of standards here) For the 2,499 or less student LEA size, a new director can have an associate degree, with an academic major in specific areas, and at least two years of relevant school nutrition program experience. This is an increase from the proposed one year. If a person has a GED and at least three years of relevant experience they can also be hired; this is a change from the proposed five years.

•    For LEA size 2,500 to 9,999 students, a person can be hired as director if they have a bachelor’s degree in any academic major and at least two years of relevant school nutrition program experience. This is a new option in the final rule.

•    For LEA size 10,000 or more students, a person can be hired as director if they have a bachelor’s degree in any academic major and at least five years experience in management of school nutrition programs. This is also a new option in the final rule.

•    As a reminder: All current directors will be grandfathered in. If a director, however, wishes to move up in LEA size, he/she must meet the hiring standards for that LEA size.

•    If a job is advertised before implementation date of July 1, 2015, there is flexibility to hire a director who doesn’t meet these requirements.

•    Food safety training standards were also changed. At least eight hours of food safety training is required either not more than five years prior to the new hire’s starting date (it was three years) or completed within 30 days of the start date.