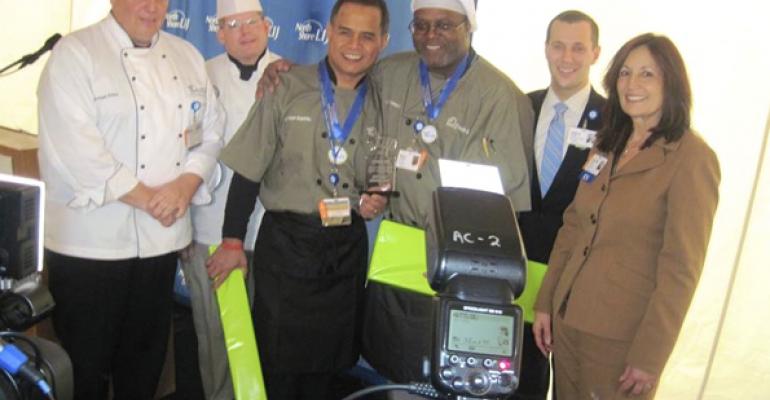 Michael Pollan famously wrote, “Eat food, not too much, mostly plants” as a way to simply explain his philosophy for better eating. That plant-based component was the star at a recent competition for hospital chefs from Glen Cove Hospital, Glen Cove, NY.

For the third year in a row, the Ultimate Chef Challenge required participants to showcase a meatless entrée centered around a surprise plant-based protein of either seitan (wheat gluten), tempeh (fermented soybeans), tofu or chickpeas. Teams were paired with a registered dietitian from North Shore-Long Island Jewish Hospital to ensure each dish came in at 500 calories or less, with no more than 600 mg of sodium.

The entrée that blew the judges away turned out to be Seitan Polenta Croquette, Spicy Pesto Sauce with Zucchini Radicchio Salad and Melon Shooter, an elaborate plant-based dish prepared by Chef Lyndon Espiritu and Chef Dalton Christopher, both of Glen Cove Hospital.

“Our dish was totally different,” Dalton says. “It looks and tastes great and it’s nutritious, too.”

Lyndon said creating meatless dishes forces him to think outside the box, something that really sets apart great vegetarian and vegan entrees.