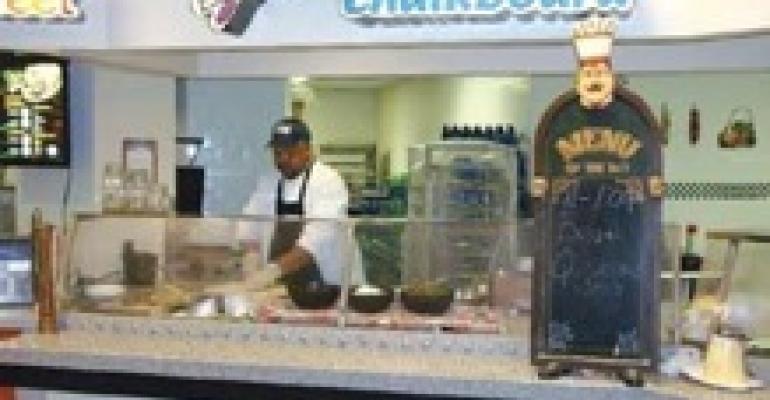 For The Bang Renovation Buck

Almost 10 years ago, Lisette Coston faced a very familiar crisis. The new nutrition & foodservice director for St. Francis Health System in Tulsa, OK, she was confronted with an outdated retail operation, cellar-dwelling satisfaction scores and a dearth of capital dollars to effect any meaningful change.

A consultant hired to look into the situation came back with a recommendation for a renovation priced at $2.4 million, a price tag that proved untenable.

"I had to be creative and look for unconventional sources for funding," she says.

That unconventionality and creativity has resulted in a neardoubling of her retail revenues despite largely holding the line on price increases. More traffic and increased check averages, thanks to appealing new concepts and food choices, have been the prime reasons for the increase.

Coston and her team remodeled the cafeteria in the system's main hospital, adding a series of self and manufacturer branded concepts along with a c-store and coffee kiosk near the entrance. She also implemented a new cash register system with payroll deduction that paid back its $70,000 investment in only seven months—about half the time of the original estimate.

Coston is not finished, either. On tap for the near future:
• a retail operation in the adjacent Warren Clinic professional building, scheduled to open in October;
• a new 104-bed children's hospital in which she will have a retail operation as well as patient dining, scheduled to open in January;
• system-wide implementation of a patient room service program;
• several more coffee kiosks at key intercept points to capture coffee and grab-and-go meal business;
• a major kitchen renovation at the operation at the rapidly expanding St. Francis South campus, where plans call for the bed count to jump from 52 to more than 200 in the next year;
• an online ordering option for system employees sometime next few years.

At the main facility, average daily patient counts are over 600, so this is where plans to convert entirely to room service will face the biggest challenge (room service is already in place at St. Francis South and in the main facility's cardiac unit and will be implemented from the start at the new children's hospital).

The conversion is scheduled to take place before the end of the year, Coston says, and will entail ditching the current cook-chill system and reconstructing the tray line area to add a cooking line.

The major work in the main facility has already occured over the past seven years in the retail operation. That was where the organizational rejection of the original $2.4 million price tag prompted the rethink.

"My biggest initiative was to introduce branding," Coston says. Using a variety of creative funding sources—from vending and volunteer monies to marketing opportunities from vendors and the department's own budgeted funds—they renovated the 12,000-sq.ft. retail operation.

Our biggest success story came after we introduced our first three branded concepts," she recalls. These were Stone Willy's Pizza, a franchised concept from Hot Stuff Foods; Sunset Strips from Tyson Foods; and a Starbucks Coffee station. The total cost: $21,000, derived from vending and departmental capital dollars.

"We personalized our own branding by adding a demo station called Chef's Chalkboard where on Monday, Tuesday and Wednesday we prepare unique menu items like Southwest brisket salad, omelets, grilled Monte Cristos and panini sandwiches," Coston says. On Thursdays and Fridays, the station converts to a branded Austin Blues Barbecue.

More recently, the department was able to add a coffee kiosk in the main lobby that now generates some $700 in daily revenue, and a new POS system with payroll deduction capability. Currently, 53% of St. Francis employees participate in the payroll deduction program.

"We do the full gamut of Starbucks's offerings, including frozen drinks, iced coffees and chai tea," Coston says. The food—packaged sandwiches, salads and baked goods—is made in the main retail kitchen.

"We work with Sunset Strips on the menu," Coston offers. Many of the specialty salads use the station's chicken products and are sold with the Sunset Strips brand.

Coston plans to open similar kiosks with the same broad menu in the new children's hospital and in the Warren Clinic building.

"We still offer cinnabuns and soft cinnamon rolls, but we wanted to add more variety," Coston explains. "Just by adding a small warmer and a steamer to the station we are able to do burritos."

"Our revenue is now double what it used to be since we added all these concepts," she adds. "We didn't raise prices as much as you would think. We've kept up with inflation, but mostly we just added variety. The payroll deduction option, introduced in December 2005, also helped."

Coston is not sitting on her laurels. "We have gotten approval to add a web-based program that will let people order online, and we plan to add that in the next year," she says. "My goal is to have it in all my retail areas."

The St. Francis South hospital (formerly the Saint Francis Heart Hospital) is ready to accelerate operations with the recent completion of a major kitchen renovation and expansion. Recently converted back to self-operated foodservices, it is expanding from 52 to 104 beds (and to 200 beds by 2010).

"We doubled the size of the kitchen and serving area to handle the additional 52 beds," Coston explains. "With this expansion we will be able to offer more menu choices: salad and soup bar, hot entrï¿´´e specials, deli choices, and Starbucks offerings."

It does have a chef who prepares meals for the Eating Disorder program in which patients who have progressed to a self select status are able to choose choices in a traditional setting. The rest of the psych patient meals are brought over from the main campus.

"When the main campus converts to room service, we have made provisions in our kitchen design and meal delivery systems to offer a traditional meal service for psych, rehab, and other patients who are unable to participate in room service," Coston says.