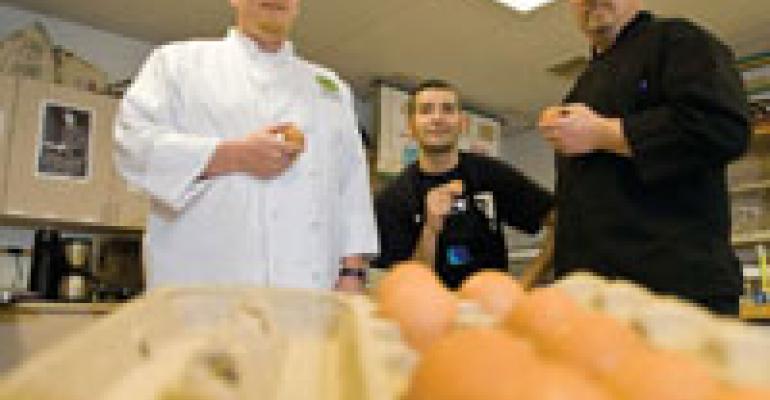 When Tim Cirpiano took the job as foodservice director at Bloomfield (CT) Public Schools a year and a half ago, he was determined to maximize his department's use of locally sourced ingredients.

But instead of just nurturing contacts with local growers, he also reached into the school community and forged somewhat unique alliances with a couple of the teachers at the district high school.

One is with Chef Paul Waszkelewicz, director of the district's culinary arts program, and the other with Joe Rodrigues, who teaches environmental science and biology at the high school. As part of his duties, Rodrigues also oversees the department's vocational agri-science education program. It includes an outdoor garden and four greenhouses where the program's nearly 100 students learn to cultivate various crops and even farm fish (Bloomfield High School is a local magnet school for these programs).

As a result of the alliance, Bloomfield's nutrition services department now works with culinary arts students to develop recipes and promote dishes emphasizing local products. Meanwhile, the environmental science facilities cultivate ingredients that are used by culinary arts and the cafeteria (with waste composted back into the growing cycle).

Participating students get a real-world education in growing crops, developing recipes and cooking dishes. Their participation also helps engage the rest of the students into thinking about issues like eating locally grown foods, consuming more fresh fruits and vegetables and appreciating the ecological impact of their dining choices.

The program has been recognized by the state of Connecticut, which awarded Cipriano and Bloomfield Schools with a Climate Change Leadership award last May.

Cipriano's enthusiasm about local sourcing has become somewhat of an area legend, to the extent that he has been dubbed the “local food dude.” It's a nickname he says was conferred on him by fellow Connecticut local foods activist John Turenne. (Turenne is the former executive chef of Yale University Dining Services who oversaw the culinary transition in the early days of the school's Yale Sustainability Project initiative. He is now a prominent industry consultant on sustainability and local sourcing issues.)

Outside of the schools, Cipriano remains very involved in local farmers markets, is planning a farmers market/culinary education program targeted at seniors that will kick off this summer (see below) and maintains a website (www.localfooddude.com) that promotes ties between Connecticut growers and the state's foodservice operators.

That Cipriano is such a committed local food enthusiast is somewhat of a surprise, given that he spent much of his culinary career cooking for commercial chain restaurant operators like Sbarro's, Dakota Steakhouse and Spaghetti Warehouse. After all, these are not exactly hotbeds of sustainability initiatives — and certainly weren't when Cipriano worked for them back in the 1990s.

Cipriano began his conversion when he started cooking in schools, first at a private academy and then as chef for the public middle school in Cheshire, CT.

Initially, his emphasis was just on promoting fresh foods, wherever they came from. “I thought local was great but we needed to get more fresh product into the kids regardless,” he says. “I saw kids eating and enjoying the summer squash we'd buy in the middle of winter and I thought that was great.”

Cipriano's transition from Fresh Food Dude to Local Food Dude began at a Breakfast With the Farmers event he attended toward the end of his first year with Cheshire Schools.

“We had already been working with a local orchard that gave us fruits but this breakfast exposed me to the other side, the vegetables. Farmers told us that if they could sell schools, they wouldn't have to throw vegetables out at the end of the harvest season. They also said they would be willing to sell to schools at fairly competitive price because we could give them volume.”

Cipriano worked with Connecticut Farm-to-School project coordinator Elizabeth Fleming on a pilot program at Dodd Middle School in which an eighth grade consumer science class worked on developing recipes using local products. They would do nutrition and cost analyses on the best ones, sample it and then market it to their classmates.

“I would sample different things with the kids,” he says. “We'd make a fresh tomato salsa, watermelon gazpacho, blueberry soup---different things and give kids samples and see their expressions. Then we would put it on the menu if they liked it.”

One dish that came out of this process was Squapple Crisp (see recipe on p. xx), which Cipriano brought over to Bloomfield, where it has remained a favorite. Other dishes from this period included balsamic roasted vegetables. “Kids loved the roasted vegetables. They were actually eating beets and turnips and commenting on how sweet they were and how surprised they were that vegetables taste so good.”

As the director at Bloomfield, Cipriano has been able to maximize the advantages of local sourcing while minimizing any disadvantages. Obviously, with Connecticut's short growing season, the bounty comes quickly and fades just as fast.

“When you buy in season the price is very competitive,” he says. “We can get pretty much anything until October and economically, we try to do as much as we can over this period. We'll blanch broccoli and freeze it for use later on, for example. Unfortunately, we don't have a lot of extra freezer space.” In the cold months, his local product supply is mostly limited to vegetables like winter squash, onions and potatoes.

He currently works with nine farms, four directly and the others through distributor Sardilli Produce & Dairy Co. The distributor consolidates and delivers the farmers' products to Bloomfield Schools' two kitchens: one at the high school and the other at the middle school that serves as a central kitchen supplying three elementary schools.

One advantage Bloomfield offers Cipriano is the student demographics. “Here, I'm lucky to have huge West Indian population, primarily Jamaicans whose families regularly use fresh vegetables and fruits, often out of their own gardens. So they saw the food I was serving as not too different from what they get at home. Cheshire was more of a challenge because it was a bedroom community where the kids were used to relying on Boston Market and McDonald's for lunch.”

As a gesture to the Jamaican community, Cipriano made a deal with a local farmer to grow callaloo, a Caribbean leafy green that is usually served braised. “We put it on menu and teachers of Jamaican descent were blown away. The feedback was great,” he says.

Another big hit — kale soup, and not just at the school but also at a special dinner at the state capitol for the Connecticut Working Lands Alliance annual meeting last year.

“There were state legislators, senators and Congressmen at the meeting, along with chefs from all over the state,” Cipriano recalls (the Alliance works to preserve Connecticut's farmlands). “Having our Bloomfield farm-to-school program product there was a pretty good thing. It got our name out there.”

Cipriano's latest project will bringing the local foods gospel to the other end of the age demographic. This summer, he plans to work with a local nonprofit, the Bridges Healthy Cooking School, to create pilot program for senior nutrition, which will bring farmers markets directly into senior centers once a week for several hours in the morning.

“They will take place in conjunction with senior education classes that will address ways seniors can increase their consumption of grains and of fruits and vegetables, Cipriano explains. “There will also be cooking demos and classes on how to select and prepare the different foods they can buy at the market. We want to form a better bond between the seniors and the farmers.”

THE BIG IDEA: Working with Teachers

Bloomfield (CT) Schools Foodservice Director Tim Cipriano learned to work with teachers when he served as chef in the Cheshire (CT) Middle School kitchen. There, he formed an alliance with a consumer science class to develop and promote healthy dishes made with fresh (though not necessarily locally sourced) ingredients.

When he landed the job as director of his own program at Bloomfield, one of his first moves was to establish similar ties, this time with teachers in the magnet high school's vocational education program.

The initial contact was with biology/environmental sciences teacher Joe Rodrigues.

“I went to see Joe shortly after I arrived,” Cipriano recalls. “He had greenhouses with a couple of raised beds and a small aquaculture program. They were for academic use, though he also worked with Chef Paul Waszkelewicz on growing herbs and a small volume of tomatoes for the culinary program.

“So I said, ‘Why can't we have our own farm at the high school and grow things to serve in the cafeteria? And why can't we work with Chef Paul and team up agri-science and culinary students and teach them the whole cycle of life, from seed to compost and around again?’ After all, we had all the components.”

The collaboration began to bear fruit (and vegetables and herbs) last spring, when some seedlings were started in the greenhouses. Rodrigues tended the beds over the summer. August yielded a huge bounty of vegetables from both inside the greenhouses and from the outdoor beds.

“We chose items that were a little different but not too far out,” Cipriano offers.

The culinary students help develop recipes that incorporate the site-grown ingredients. “In many cases, it's just the vegetables with maybe a little spicing,” Cipriano says. “We want to highlight the vegetables and show that it was grown right here in the high school for you.”

Tomatoes — of which there was a more-than-expected bounty — wound up in salads, sauces and even gazpachos. They were even served on salads district-wide on some days because of the volume (the program was otherwise limited to the high school cafeteria).

The agri-science center produces more than just plants. Two of the four greenhouses contain huge aquatanks in which the students raise various species of fish (bass, sunfish, etc.). Cipriano's contribution to the aquaculture program was to suggest adding tilapia, a commonly farmed food fish, so the cafeteria can serve a locally sourced fish dish at some point.

He plans to have enough tilapia raised and ready by late spring to serve a meal at the high school. Meanwhile, Waszkelewicz will be able to use the fish in his classes, perhaps coming up with some recipes. Processing is the big hurdle for the tilapia project, a labor-intensive task that Cipriano plans to do mostly himself with some help from some of the district kitchen staff if he can find training time.

The agri-science center also added chickens to its collection recently. However, the birds produce only about a dozen eggs a week, enough for the culinary classes to play with but hardly useful in the cafeteria's volume feeding environment (there are no plans to slaughter them for future chicken dish recipes as they are layers, not broilers, Cipriano is quick to point out).

The birds are caged in mobile pens that agri-science students move around the campus, “so they are as free-range as you can get in a high school,” Cipriano quips.

Future plans call for aquaponic beds on top of the tilapia tanks in which students can grow herbs for the cafeteria and culinary classes.