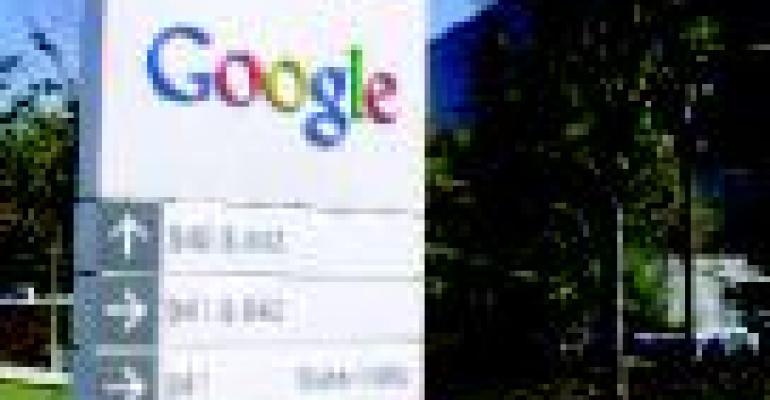 The Care and Feeding of Google

The employees are still skateboarding to and from their jobs on the Mountain View, CA campus of Google, Inc., and a large yellow coil packed with parked mountain bikes is among many signs that the dot-com culture is still alive and thriving in this part of the world.

Google's offices are located in the Shoreline industrial park, across from the ampitheatre that rock promoter Bill Graham built for the Grateful Dead. Driving into the main parking lot, I see a large white van that reads HAIRCUTS.COM ("Get in. Get out. Get on with your life!" reads the motto on its side).

A security guard directs me to the main lobby in Building 41, where I sign in and tell the receptionist I'm here for my meeting with Google's executive chef. As she makes a call to check this out, I glance around the room and compare it to the lobby I saw in my first visit to the company in late 2001.

Google has moved into new facilities since then and, despite the high-tech culture, it definitely has a more corporate feel these days. While a few of the trademark lava lamps re-main, the large banks of them that decorated the original lobby have given way to more architectural "white space." The projection of random, ongoing Google searches that used to scroll along the darkened ceiling and back wall of the reception desk has been updated with a large and very thin LCD panel hanging there. It is still hypnotizing and very cool as I watch the queries stream by in different languages... berkeley brides ... elephant main skeleton ... unser gedächtnis ... cyclic neutrophenia ... quicktime update ... fédération photographique ... phytochemicals ... digital camera reviews ...

Welcome to Charlie's Place
Charlie Ayers is Google's executive chef, the one I'm here to see, and my reverie is interrupted when he suddenly pops into the lobby from a side door. A Johnson & Wales culinary grad with a BS in foodser-vice administration, Ayers worked as a caterer and chef for a variety of demanding Bay Area clients and restaurants before joining the fledgling startup company in 1999 (see FM's May 2002 story: Why the Food at Goooogle Is So Gooood).

After a quick greeting, Ayers leads me on the way to the café and I ask him about the haircutting service van outside.

"It's one of the things they do here to keep productivity up, like offering free meals to employees," he says. "The company culture is very focused on productivity and keeping people on campus. They bring in a dental van service too!"

We enter the café and it's immediately clear that Google's foodser-vice operation has grown just as dramatically as the company itself over the last three years. When Ayers first joined the company, there were 40 employees and he ran a one-man operation; when I visited in 2001, there were 200 employees and a foodservice staff of seven. Today, there are almost 3,000 Googlers worldwide, 2,000 of them on the main campus, and a team of 86 to support the foodservice operations. Ayers is clearly proud of the program and the reputation it has earned.

Ayers tells me that a large amount of dining and snacking takes place outside the cafés.

"We cater a lot of meals to meetings where people just work right through lunch," he says. "We also have 'micro-kitchens'—convenience break rooms—all over campus that are stocked with beverages, hot and cold cereals, organic fresh fruit and other snacks. Googlers can use them any time of the day or night."

By now, it's almost lunchtime—staff are busy prepping and garnishing the trays of food at the main stations. Lunch runs from 11:30 to 2:30 and it's already after 11:15, so we put off the the rest of the interview until the main rush is over.

Building community
Ayers has to check things out in the kitchen so I wander in and out of the stations, watching setup practices and taking pictures. Within a few minutes he returns to touch base with cooks and servers, sampling the day's entrees and sides as he goes. His style is at once both personable and demanding; he points to detail after detail, offering a compliment here, a suggestion there, a reminder when needed.

The first Googlers arrive promptly at 11:30 and within minutes there is a steady stream of workgroups feeding into the café from the walkways outside that lead to other buildings in the Googleplex.

Everyone refers to the dining room as "Charlie's Place" (some even wear an 'I eat at Charlie's Place' T-shirt) and many diners seem to know him personally. You can see he enjoys the attention; he works the crowd just like the owner of any classy restaurant.

Five main stations dominate the perimeter of the servery: Back to Albuquerque (Mexican/Latin cuisine); Al Forno Romano (Italian/Mediterranean); East Meets West (Asian); Vegheads (Vegan/Vegetarian) and a hugely popular dessert display. In the middle: an immense salad bar that is constantly re-stocked with leafy greens, fresh-cut veggies and an extensive range of dressings and condiments.

The room itself is high ceilinged and minimalist, but the stations have added color and interest with thematic elements: dancing Buddha statuettes, Mexican sarapes, woven steamer baskets.

There is constant sense of movement and flow as hundreds of Googlers flood through the facility, accented by display activity around Al Forno's pizza oven, East's stir-fry woks and Albuquerque's rotating tortilla grill. Meanwhile, convenience-oriented diners are also well served: there is an eclectically-stocked cooler filled with popular and new-age bottled beverages as well as a grab-and-go area for snacks and takeout items.

The main seating area retains the simple look and feel that's a tradition at the company. Its long rows of adjoining tables would fit right in to a grade school or summer camp's dining hall, and Googlers seem not only accustomed to but enthusiastic about the idea of sitting across from or next to a constantly changing mix of colleagues.

Vegan and vegetarian fare is an important part of the menu mix at Google, and ranges far beyond the soy protein and salad based offerings of many onsite cafés. I walk over to the Vegheads station and find a selection that includes Tabbouleh, Baba Ganjou, Hummus, Dolmas (stuffed grape leaves), Tsatsiki Sauce, Stuffed Squash Blossoms, Spinach-Lentil Dahl, Khombi Tartare, Curried Chick-peas and Stuffed Vidalia Onions.

Between 20 and 30 items are offered at every station. Some of these, like the Curried Chickpeas, are weekly specials. Others will be replaced tomorrow by items like Vegetable Samosas, Artichoke and Mushroom Casserole, Crispy Vegetarian Empanadas or Tomato Mozzarella Tarts. Seitan, curry and a wide range of cold salads are traditional Google favorites that are reincarnated again and again in countless variations.

Virtually everything offered in the café is prepared fresh daily, although many ingredients are marinated for a day or more in advance. By this time I'm pretty hungry myself and try a half serving of Five Spice Chicken over Somen Noodles.

The chicken is seared and marinated and served hot, with cucumber, tomato and a sweet chili dressing. My appetite whetted, I move on to Mu Shu Duck with Plum and Hoisin Sauce. The duck breast is julienned, served with shiitake mushrooms and red and yellow peppers. It comes with a side of Szechwan pancakes garnished with green onions, plum and hoisin sauces.

Ayers appears suddenly at my side, wanting to know how I like the food. "I'm surprised your people don't stay for dinner every night," I say.

"We do a lot of things with food to help build community among our employees," he offers. "For example, we run 'Big-A' barbecues two or three times every month out on the patio that are really big parties to help folks let off steam.

"Another thing—because we also occupy buildings on the other side of the main drive, we have a satellite operation that offers lunch to the folks there. We develop special menus just for them, items you can't get here, so people there don't feel like second class members of the community."

Growing Pains
By 1:00 pm the crowd has abated and Ayers and I sit down in a back corner to finish the interview. As a segué, I compliment him again about the food and ask how the menus are developed.

"We provide many unusual benefits for our employees, including meals free of charge, doctors and washing machines. We are careful to consider the long-term advantages to the company of these benefits...We believe it is easy to be penny-wise and pound-foolish with respect to benefits that can save employees considerable time and improve their health and productivity."

In the beginning Ayers says he created all of the menus and recipes himself, but now, "with a larger staff, we try to let everyone contribute their own creativity." Station leads develop recipes that he approves. Station menus are developed two weeks in advance to aid in planning and food purchasing (see sidebar below).

"We are not trying to re-invent the wheel," he says. "We do not want to make our foods complex, but to complement and bring out their natural flavors. We want food to be easy and approachable, although we do things that are 'way out' there sometimes—lobster tacos with watermelon salsa, for example— but that is a special item and not typical. We try for an eclectic mix but rely on classic styles of preparation."

I think back to the small dining room and short prep line that he operated on my last visit. "What was the transition like," I say, "managing a program that grew as fast as this one had to?"

"It was a challenge, to say the least," he says. "We have high standards and had to scale up quickly, even though there was simply no room in which to do it. Soon after your visit, the whole room had to be used for seating and we moved our kitchen equipment into a leased trailer truck outside. I stayed in the dining area manning a very small finishing area, greeting people, serving them, looking to maintain the close-knit culture we'd always had. Part of our mission is to en-courage healthful portion sizes, good choices, and you have to be there on the serving line to do that."

"It was so tight that the chefs said it was like working in a submarine!"

That's when they raised the skull and cross-bones flag above the temporary facility, he says. "They still fly it above the patio entrance here."

Staffing the kitchen with the right kind of talent had become a major challenge, one Ayers said was solved by striking a deal with the Bon Appetit arm of Compass USA to provide additional employees who help execute his culinary program.

"It is a unique relationship," he says. "We still supervise all of the production and menu planning. but they provide personnel, payroll, HR and benefit services. Keep in mind that foodservice is not the core business here, and the company plan was to out-source some of the service during scale up. We were skeptical at first, but it has brought a lot of value to the program."

The company finalized the leases for its new offices last November and began the migration to the present buildings, once occupied by Silicon Graphics.

"We sent a satellite team over here to serve the software engineers who moved in early, because the founders wanted to continue foodservice for everyone during the migration," says Ayers. "But the big move came in January.

"We worked long days, moving the kitchen equipment, getting production up and running over here. We had hungry mouths to feed and the Googlers expected business as usual—they were working long days too. We wanted to make transition as seamless as possible and we really pulled it off. Looking back, it was one of the smoothest openings I'd ever had."