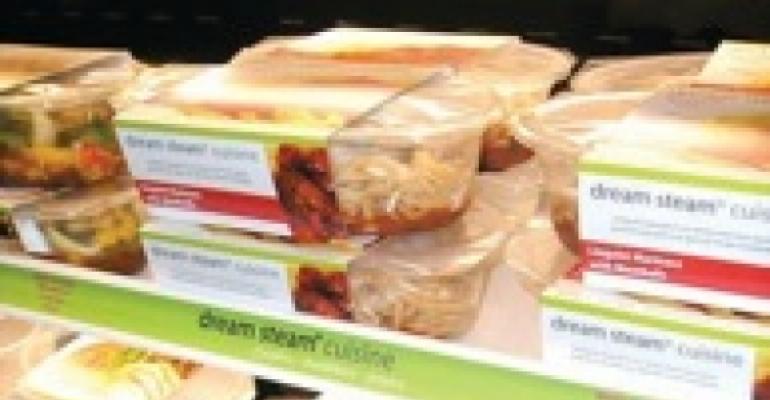 Packaging technology has often created new markets for food products with applications that simply did not exist before.

It is no coincidence that the introduction of Cry-O-Vac packaging so closely corresponded to the growth of the boxed beef industry. Or that it was the perfection of laminate films, permeable membranes and controlled atmosphere packaging that turned fresh cut produce from a regional, just-in-time business into the booming national, extended-shelf-life opportunity it is today.

The North American division of U.K.-based Compass Group is betting that just such a packaging solution can help it address a variety of business challenges specific to key onsite markets. They range from the need to profitably service small population B&I sites to off-site catering opportunities, from "third shift" and "home meal" solutions to improved late tray and room service programs in hospital environments, and even to convenience offerings in sports and entertainment sky boxes.

Marketed under the Dream Steam Cuisine brand, the new product offerings will be produced from fresh ingredients, assembled under controlled conditions in Compass commissary and central production facilities and distributed as refrigerated product with a 24-48 hour shelf life. Key to the technology is a specialized pressure valve and package sealing process that creates a ready-to-microwave package. When heated, the food quickly cooks in a pressurized steam environment that produces a moist, high quality product that is superior to most typical "heat-and-serve" convenience foods.

Compass embarked on fairly extensive beta production, package development, test marketing and price point evaluations in the latter half of 2006. It has offered Dream Steam meals at client accounts in several regions of the country, reportedly including the main Microsoft campus in Redmond, WA. The company plans a series of wider regional rollouts in the first half of 2007.

From Room Service to Off-site Catering
The single-serve version of the product is designed for rethermalization in a microwave in three to four minutes. Entrees will be available in over a dozen varieties ranging from Chicken Alfredo with Penne and Vegetables to Fresh Salmon with vegetable and potato sides. Typical ingredients range from protein like chicken and fish to sides like fresh vegetables, rice and couscous, and will include vegetarian and low-fat options.

In the Atlanta area the company has targeted more than two dozen sites, selected a commissary for production and trained a small staff to implement the program on its official rollout. Similar efforts are reportedly also planned for Orlando, Minneapolis and New York after the first of the year.

The smartly-packaged retail meals are designed for higher price point grab-and-go applications, home meal replacement sales and "third shift" offerings where site traffic can not support traditional cafeteria service. They are also thought by some to represent the lesser opportunity in the longer term.

A larger opportunity could well exist in healthcare and catering, which may have a myriad of applications that go beyond those of retail display offerings.

In Europe, the technology has been used for several years in hospitals, with a la carte meals plated on china, sealed, and then stored in refrigerated individual floor pantries to be re-thermed as needed.

The booming demand for on-demand room service in U.S. hospitals (some surveys show as many as 40 percent of acute care operators are investigating such programs) would seem to be a natural application here. Late trays (meals provided to patients who miss them at normal meal times because of test schedules) have long been a challenge for hospital operators and could be another significant application for the technology.

A primary interest is in off-site catering, where meals could be bulk packed and prepared quickly with minimal equipment requirements.

Another primary interest is in off-site catering, where meals could be bulk packed and prepared quickly with minimal equipment requirements. The high quality of food cooked in this way, and the speed at which it can be prepared, could make it an attractive catering option, especially for high-end events.

The Price of the Package
Still, the approach is not without some drawbacks. A primary one is cost: those familiar with the technology estimate that the container and steam valve add between .65 and .85 to each meal. Dream Steam meals offered by Compass in its retail in test markets are tagged to sell at between $4.29 and $6.79, depending on the meal and region.

In healthcare, a cost premium of that size could prove problematic, although the technology's potential to improve patient satisfaction via significantly improved fresh food quality and room service delivery times may in some cases allay the cost issue.

Also, the breadth of Compass' Canteen organization, with its many regional commissaries that already supply fresh packaged food for vending operations, could potentially provide an efficient base for tightly controlled regional production and distribution across the country. In recent weeks Compass expanded its market testing to the Atlanta region and began preparing Dream Steam meals in one of its commissaries there, reportedly supplying them to about 30 selected sites via refrigerated van service. Similar tests are set to begin in New York City, Orlando and Minneapolis.

Another possible production option could include the "Advanced Culinary Centers" Morrison Management Systems operates in the Baltimore, Charlotte and Orlando areas. Originally built as regional central production facilities in the late 1990s, these centers all have additional production capacity and are designed for daily production and distribution of fresh product.

In either case, planning no doubt depends on how well Dream Steam's high quality and convenience play out relative to the meals' higher price under actual market conditions. As the Morrison Management Specialists' division found out some years ago, the original expectations for central production in the Advanced Culinary Centers never completely fulfilled early expectations.

Until now, Compass executives have been tight-lipped about the Dream Steam project, both because licensing agreements had not yet been finalized and because of competitive concerns. However, significant roll outs are expected throughout the first half of 2007 and the program will no doubt begin to receive higher visibility in coming months.