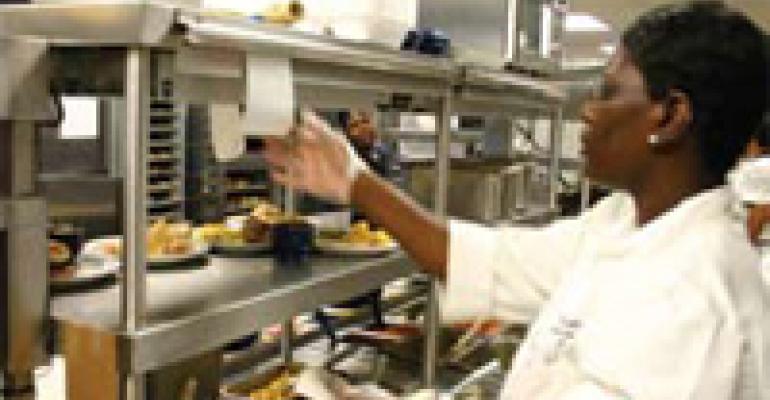 From Cook-Chill to Room Service on Demand

When Methodist converted its patient meal production to room service in 2005, the move entailed a retrofit of one of two tray lines (the other still supplies select menu service to ICU patients and others for whom it is necessary). The switch was made easier because the hospital had had the tray line assembly area

designed to accommodate some in-line cooking, which greatly facilitated the conversion.

In the planning stage, a lot of effort was expended to educate Methodist’s administration about how the program would be implemented, says FSD Vanessa Robinson. “The most
difficult part of the transition was training staff in the use of the equipment and in the subtleties of the new menu system,” she adds.

“You have a whole department of people accustomed to doing things a certain way. Now you are going to infuse the whole department with new processes. Some individuals need new
skills because room service requires a lot more interaction with the patients.”

The department posted detailed job descriptions for the new roles, invited comments from staff and interviewied employees to find those who would be the best fit for the new positions.

“The hospital was very supportive,” Robinson says. “The plan called for keeping the change FTE-neutral, and the HR and compensation groups worked closely with us to ensure that the
restructuring of existing positions went smoothly.”

Patient services manager Elmira Gage, a Methodist hospital veteran of 27 years, took on the job of working with and training those who were ultimately selected to staff the new call center and floor host/hostess system.

The transition was managed in stages, migrating about 200 patients to the new model in stage one, then adding 100 more patients in each subsequent stage. Almost 600 patients use the room service program daily now, with meals delivered within 45 minutes of order placement.

Because the goal was to manage the transition so costs were flat before and after, “reducing waste in the production cycle was critical” Robinson says. That meant designing a menu with items that could be efficiently produced in varying quantities to match daily production forecasts, with final production fine-tuned on the fly.

Bulk, cook-chill production is still used for some components like soups and sauces, but “for practical purposes, there is very little overlap between production for patient meals and that used for retail,” Robinson says.

Breakfast and lunch room service is provided floor-by-floor by host attendants who are on duty from 6:00 p.m. -2:30 p.m.. The evening meal is handled in a 4:30 - 7:30 p.m. window on a tower-by-tower (there are five) basis, rather than floor-by-floor. It is structured so that many meals are pre-ordered in consultation with the floor attendants earlier in the afternoon.