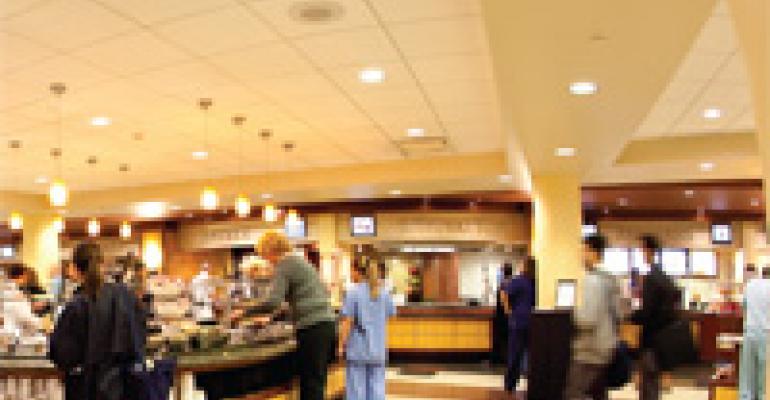 Charged with providing dining, catering and vending services to patients, residents, staff and visitors at these disparate sites is Sodexo Health Care.

The contractor and the client have forged a strong relationship, says Tom Schwendeman, Sodexo's district manager for the UH contract. “We have a very nice partnership with UH that makes everything we've done work really well. As a contract company, you need the foundation of a strong relationship for the partnership to be successful.” He cites the recent remodel of a branded Einstein's Bagels kiosk. the introduction of new POS, digital signage and order entry technology and a partnership with a local nonprofit on a composting program as examples of successes derived from such a mutually constructive relationship.

UH's main complex, with its various hospitals, large staff and sprawling real estate require volume dining service with a personal touch. The regional hospitals — ranging from less than 20 beds to more than a hundred — need to be efficient with their small volumes, and yet offer the same level of service as the big main campus.

And then there is the extended care center, a triple-level residential complex with various dining needs ranging from retail dining for a small staff and restaurant-style dining for assisted living residents to traylines for the confined hospital patients. The management services center, on the other hand, is essentially a B&I location.

To deliver the kind of foodservice UH expects at such a variety of service points, Sodexo has designed a semi-custom program that combines the larger organization's broad capabilities in menu development, facility design and service modules with unit-level adaptations to individual circumstances.

All Kitchens Are Not Created Equal

The primary driver for Sodexo's initial relationship with UH, which began in 2002, was the contract management company's capabilities in implementing room service dining. Sodexo (then known as Sodexho Marriott Services) was one of the first in the industry to develop a room service module, At Your Request, and UH wanted to be among the early adopters of what was at the time a fairly unusual service.

However, UH's main kitchen — designed around a volume production cook-chill operation and traditional trayline — made effective individual tray service difficult, forcing employees who filled room service orders to negotiate the physical limitations of the space while completing their assignments.

About a year later, Sodexo got a second kitchen in a new building that it was able to design specifically to accommodate room service. Today, this kitchen supplies room service meals for about three quarters of the Case complex. (The rest must still be supplied from the old kitchen because the distance to some of the patient areas is prohibitive from the new one.)

The situation may improve in 2011, when UH plans to open its new cancer hospital, which will include another production kitchen designed with a series of built-in enhancements from lessons learned over the past five years.

One change will be a new layout for the cart delivery/return area. Currently, returning and deploying carts go through the same constricted doorway. The new system's circular design will allow returning carts to enter at one door, get sanitized and then exit through another door to the production area where they can be reloaded.

Retail dining was the next major upgrade target for Sodexo after implementing room service at the main campus in 2003. The complex is primarily served by a single cafeteria in the Lakeside Hospital building.

By the early 2000s it was not only dingy but hopelessly behind the times — it was known for its “mashed potatoes with orange gravy,” jokes Ronald Dziedzicki, UH's senior VP and general manager of operations since 2006 who is also a colonel in a local Army Reserve Medical Group.

In 2004, capital dollars were allocated for a major renovation that took the cafeteria off line for about eight months. The project was unusual among capital investment commitments in that it was not expected to boost sales much in a space that, whatever its shortcomings, regularly drew thousands of customers each day.

“To make a change that would not impact revenue is not typical for us,” says Dziedzicki. “We did it for the employees and to some degree the patients.” Dziedzicki says his military experience has taught him the positive impact foodservices can have on morale as one of the reasons for this deviation from strict bottom-line thinking.

“We want to be an employer of choice and the quality of the dining onsite is part of that.” Significantly, in his former role as UH's chief nursing officer, Dziedzicki was credited for reducing annual turnover among the hospital's nearly 500 employee nursing staff to below two percent. He also speaks proudly of the time his combat support unit was a finalist in the Army's Philip A. Connelly competition, the service's most prestigious foodservice awards program.

The new cafe, unveiled in December 2004, brought UH retail dining into the modern onsite dining world with a series of stations offering an array of dishes, many prepared in front of customers. The mix includes pizza, grill and deli, a Freshens branded smoothie station and Innovations, an entrée station with revolving choices from a 35-day menu cycle.

Innovations has a central cooking space with interchangeable cooking surfaces. The different units are rolled into and out of the cavity in the center of the working area, hooked up to the utility line, and latched to the surrounding prep surfaces for the needed configuration. The setup allows Innovations to offer items prepared in front of customers on equipment ranging from a grill to woks and burners, depending on the menu focus. Because the changeovers can be accomplished so quickly, chefs can go from omelets in the morning to stir frys at lunch.

The cafe's menu cycle is based on corporate Sodexo recipes and is synchronized across the UH system to maximize procurement efficiencies. “This way, the unit managers don't have to worry about cherry picking through their purchasing,” says Schwendeman. The centrally directed cycle ensures menu diversity and healthy choices each day.

Sales are carefully monitored and analyzed, including customer choices by time of day through the POS system (see p. 28), says Dan Ballard, Sodexo's general manager at UH. “After every 35 days, we review our sales and product mix to make sure we're serving what the customers want. We also switch the menu around to take advantage of what's available. That not only helps us menu fresh seasonal ingredients but also lowers purchasing costs because we buy what's plentiful and in season.”

Healthful choices are always available, including at least one in the pared down dinner service for evening shift staff, and wellness and healthy dining are also emphasized with several programs. On “Wellness Wednesdays,” all the entrée choices at the Innovations station meet the hospital's and Sodexo's wellness criteria. Tuesdays and Wednesdays, teams of chefs and dietitians conduct nutritional awareness events in the cafeteria, showing how to order healthier selections.

Wellness is also supported in conjunction with the cafeteria's value meal program. While the combo meals include traditional pairings, customers can also substitute healthier sides like a vegetable, salad or soup with the entrée. “We don't want people thinking that if they get a combo, they're forced to get something unhealthy,” says Ballard. Also available are reduced portion choices, both in combos and individually.

Sustainability is supported through a growing local procurement initiative. The main produce vendor passes along information on the source of the different items it sells, allowing the kitchen to choose a local option where feasible. The local sourcing initiative is expected to get a boost when a planned salad bar renovation/expansion will allow for more locally sourced ingredients to be included.

Another sustainability initiative is a composting program in conjunction with the Cleveland Botanical Garden. Organic kitchen scraps are collected in designated bins for pickup twice a week by Garden representatives. The scraps help fertilize the city gardens where local youngsters grow produce for the community or use to make into products like salsa that they sell to help finance the program.

In 2005, Sodexo expanded its relationship with UH to include the system's regional locations. These include five regional UH hospitals, plus an affiliated hospital. These range in size from a 226-bed facility to a couple of small locations with only a couple dozen beds.

All of these locations have incorporated room service dining under the At Your Request program. Most have also received extensive cafeteria renovations (the last one is scheduled to be updated by next spring) and operate on the same menu cycle as the main Case Medical Center facility, though fewer choices are available each day. The renovations have helped boost participation at some of the locations. For example, the new eatery at UH Richmond Hospital has seen a 15-percent bump in sales since its June 15 opening, to about 400 transactions a day.

Most are overseen by a team of an onsite manager and an executive chef and have their own onsite dietitians.

Sodexo's relationship with UH is expected to expand in the coming years with the opening of several new UH facilities. The most ambitious is a new 375,000-sq.ft., 150-bed cancer hospital currently under construction on the Case Medical Center campus. Scheduled to open at the end of 2010, it will include a patient meals kitchen and a retail cafeteria operated under Sodexo's licensed Brioche Doree brand, a Eurocafe style concept that would harmonize with the new facility's emphasis on tranquility.

Also on tap for opening in early 2011 is Ahuja Hospital, a brand new 144-bed acute care facility to be located in the nearby suburb of Beachwood. Like the other regional facilities, it will include a patient kitchen and a retail cafeteria. There will also be a new Center for Emergency Medicine on the main campus but dining options for that structure have yet to be finalized.