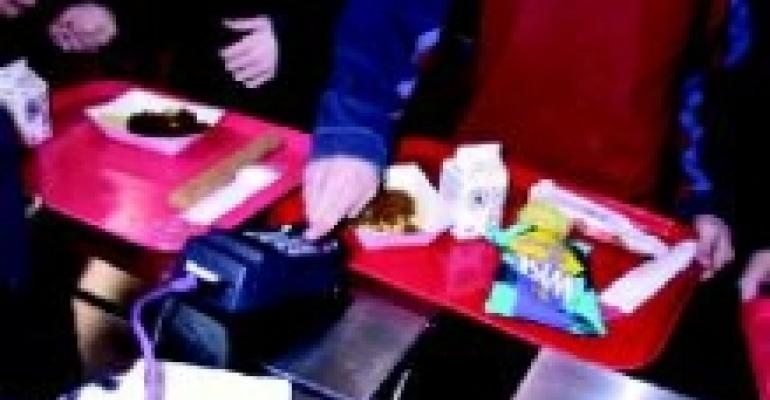 Misplaced milk money is a thing of the past in Akron Public Schools (APS).
Instead of fumbling with meal tickets, students simply place their fingertips on an image scanner. The scanner identifies and associates 40 points on the finger with the student's meal account. The money is deducted and the data is recorded.

Dubbed iMeal, the high-tech system is used in 18 of Akron's schools. With only one location left to complete at Miller South School for the Visual and Performing Arts, the system will be fully implemented in all 18 secondary schools by September 2005.

While point of sale technology such as card readers and PIN-entry pads are becoming common in noncommercial settings, state-of-the-art biometrics systems, like iMeal, are still a fairly rare breed among public school districts.

Risks and rewards
iMeal, has opened the doors to convenience and control for APS. Their success with the innovative point of sale system has increased 2004-2005 lunch participation by more than 7% in a district with a steadily decreasing enrollment.

"The system we were using was three decades old," says Debra Foulk, coordinator of the Akron Schools' Child Nutrition Services (CNS). "We decided look for an automated POS system that would expedite lunch lines."

After narrowing the ten initial bids, representing several technologies, down to five, CNS worked together to evaluate the remaining options. All foodservice operators look to their POS systems to manage and analyze data more effectively and more quickly, but when the customers are consistently under the age of 18, it's a whole different ball game, notes Foulk.

"With all the different POS systems available, we wanted to explore the pros and cons of each type. We found that schools using tickets or meal card options had trouble with kids losing the cards and the tickets. Also, with meal cards, the child's name and photo were typically displayed on the front. If cards are lost, that's a potential risk we weren't willing to take."

PINs may better protect identity than meal cards; however, a PIN can be stolen, forgotten or shared, which may result in the loss of money or the student meal discount.

"With a PIN system, the responsibility to safeguard the information is entirely up to the students. In our view, that had the potential to cause more problems than it's worth," adds Foulk.

When APS tested the biometrics technology, they found it was the most secure, the easiest for students and the best way for both CNS and parents to track what the children were buying.

Scanning the first image
Akron Schools first logistical hurdle was getting children enrolled at the start.

"We worked with the principals in each school and found the most convenient time to enroll everyone. At some schools we enrolled students during homeroom; at other schools we had the entire classes called to come to the cafeteria over the PA system. We found a way to work with the staff in each school so that the process would accommodate both our needs," says Foulk.

Now that the majority of Akron students are enrolled in iMeal, CNS enrolls 5th graders for the first time at the end of the school year, in May, so that when they enter 6th grade they are both familiar with the system and ready to actively use it. New students are enrolled at the time they begin classes.

"When students are enrolled, we scan both of their index fingers. That way if a child has an injury that requires a cast or bandages, there is a back up option. In a worst case situation, a student can simply give the cashier his or her name. The cashier can then pull up the student's iMeal account manually. It's strictly a back-up option, but it allows us to cover all the possibilities," says Foulk.

Even if the power is out, kids can still buy lunch. All systems have backup batteries that run for four hours. If there is a system failure, each school cafè receives a print out checklist with all the students enrolled in the school. The cashiers highlight the names of the lunch participants and backfeed the information once the system is up and running.

"We work closely with our vendor, Systems Technology Group. They provided us with the training, the hardware and the Lunchbox software to run the system. They also come in twice a year to maintain and upkeep our systems," says Foulk.

"Akron is the first school in the country to implement this technology on such a large a scale," says Paul Flowers, vice president, Systems Technology Group, Buffalo, NY. "There are other schools who use biometrics, but the amount of data the system at Akron processes is unrivaled."

On the operational side Foulk agrees that iMeal has improved Akron's efficiency, and streamlined the accounting, claiming and reporting system.

Yet another bonus? iMeal eliminates identifying students by their meal program statuses (free, reduced and paid). All students eating school meals must have an iMeal account, which can only be accessed through an iMeal scan or PIN. Students eligible for free and reduced priced meals are required to open iMeal accounts. The iMeal system automatically recognizes students receiving meal program benefits.

"It also let us remove the social stigma associated with subsidized participation in the meal program," says Foulk, "and that has helped raise our participation counts. At one middle school, for example, the proportion of eligible students taking advantage of free lunches increased 6%¯from 77% to 83%¯between October of 2003 and October 2004. Similarly, the percentage of students receiving reduced-priced lunches rose from 63% to 73% during the same period."

At the tips of your fingers
As students approach the cashier they access their account with a PIN or a finger scan. Once the scanner accepts the print or PIN, the account is opened and a smiley face appears on the scanner. The cashier enters the items on the student's tray. The system alerts the cashier if the child has chosen an item that contains ingredients he or she is allergic to.

"iMeal helps students and staff prevent allergic reactions. Students aren't always aware certain ingredients they might be allergic to are in the foods they choose. iMeal always knows," says Foulk.

After the cashier enters the items, the balance is displayed on the screen. Depending on how the students account is set up, money is either paid at the POS or deducted from the account.

The cashier closes out the cash drawer at the end of the day and all information that was collected from lunch is sent to the school manager's computer. The manager checks the information, then passes it to CNS where it is stored and accessible for each account in the current operating school year.

"Say a student tells his mother he or she didn't have lunch on Tuesday because there wasn't enough money in the account. Or, say a student's mother wants to find out what he or she actually ate for lunch Tuesday. She can contact CNS and we can pull up the account and see what, if anything, the student purchased as well as how much money there is in the account," says Foulk.

Footing the bill
Obtaining and funding a $700,000 system was no easy tour de force for CNS.

"We knew we needed to make a convincing case to our administration," she adds. "We had to describe in great detail to senior staff and the school board why we thought biometrics technology was a better choice than any other POS system."

The Akron Public School Board required community presentations as Child Nutrition Services put the program together. At the end of each PTA and community presentation Nutrition Services conducted a survey to evaluate the community's views on the technology, how attendees thought students might react to the technology and whether or not the system would be an overall success. This data was used to buttress the case made before the School Board.

"Meeting with senior staff, and different community groups helped give us a better idea of how the community would respond to the technology," says Foulk. "We got a lot of feedback with the survey as well as some written responses. Also, by giving multiple community presentation, everyone knew what was going on before we presented it to the school board."

The board approved the biometrics technology in April 2003. The purchase covered the cost of the entire system, including hardware, software, services, licensing, training and three-year coverage.

Self-op since 1981, CNS, with an annual budget a little over $10.5 million, not only footed the bill for the system, but also contributes money back to the school community for space utilization, energy use, and waste removal.

Akron's elementary schools operate under Provision 2, a USDA program that allows all students to eat at no cost regardless of income when a student body has a high percentage of qualifying students and meets other specific requirements. Since Provision 2 provides universal feeding, there is no need for the biometrics technology. Akron implemented Provision 2 in all K-5 schools in recent years. With 58 elementary, middle and high schools, Akron schools also offer a Provision 2 breakfast to students in 56 of the schools regardless of meal plan status.

This year, Akron saw an increase of 18.2% breakfast participation in its high schools, a 4.2% increase in middle schools and a 10.6% increase in elementary schools.

"This is the fourth year that the total amount of breakfast meals served has exceeded 1,000,000," says Foulk. "Every year since we started offering Provision 2 breakfasts we've watched the numbers grow. Breakfast is something our students have come to rely on. Everyone takes advantage of it, even paid students."

"The easiest and most efficient way of recording the breakfast numbers is with a hand clicker. When kids have 20 minutes to get through the line, eat, and get to class, we try to keep it quick and simple. It's just like the biometrics technology, quick, simple, and accurate," says Foulk.