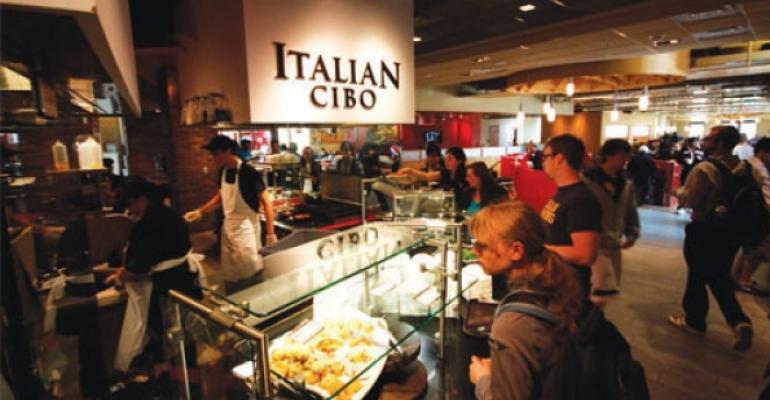 The new C4C dining facility on the CU-Boulder campus offers a spectacular center of attention, but dining' main focus is on quality improvement across all its operations.

Given her fondness for spreadsheets, planning documents and statistics, one has a hard time imagining Amy Beckstrom growing up in small-town Nebraska, riding a dirt bike to get around the family farm.

She makes this disclosure as we pass the vintage Italian Vespa in front of the Italian Cibo station in the dining hall of University of Colorado-Boulder's new Center for Community (C4C).

These days, Beckstrom has her hands full at CU-Boulder, where she is director of dining services and has been overseeing a restructuring of campus dining operations for the past half dozen years. Construction began on the $84 million C4C in 2008, and while its spectacular new, 53,000 sq.ft. eatery dominates the first floor, the center also houses many other administrative and student services offices and their relocation has opened up new residential space across the campus while significantly changing dining program dynamics.

Inside the dining hall, Italian Cibo is only one of ten themed restaurant stations, each with a distinct look and feel, menu and customer experience. Highly refined design features accentuate these differences even as the winding traffic patterns, wall construction and seating areas serve to separate each station's distinctive space from that of the others.

The mix is rounded out by an extensive fresh fruit and vegetable bar — Wholesome Field — and an irresistable Dessert Display stocked with fresh-made items from the central bakery.

Outside the main dining area, a grab-and-go, a retail bakery and a late night café offer extended, between-daypart service to the large administrative and student population that frequents the community center all day long and outside of regular dining room hours.

Behind the scenes, the new facility also houses a new central commissary kitchen equipped with a full-scale bakery and cook-chill center that operates in a tight, HACCP-controlled environment.

The Center for Community building will be entirely financed through bonds that will be repaid from campus parking fees, housing and dining revenue and private fundraising.

According to Dining's Facilities Coordinator Juergen Friese, who worked with Executive Chef Kerry Paterson as project manager for the new facility, the center was outfitted with nearly $6 mllion in equipment, most of it new.

Friese, originally trained as a chef in Germany, says the facility is outfitted with numerous features to facilitate quality and food safety. For example, storage coolers are located near most stations to ensure restocking ingredients are kept fresh and conveniently available. Cooler doors automatically log temperatures and an RFID (radio frequency identification) system logs the location of individual pans and items when they are thermally scanned.

In addition to cook-chill production, the center creates bulk sous vide items (for example, cooking the shredded pork used in the Latino station in an extended, overnight cycle). Its climate-controlled processing room produces almost a ton of fresh cut fruit and vegetables a day and all the sliced cheese and deli meat used across the campus.

At first glance, it would be easy to assume that the C4C is one more example of the kind of upgraded dining venue that has transformed the look of college dining in the past decade.

A closer look shows that the operational efficiencies the dining hall makes possible helped justify the investment it represents. And both its culinary and financial results are built upon a program vision and plan that have been in the works for many years.

It was Khalili who hired Beckstrom as assistant director in 2004, tasking her first with a series of in-depth analyses of many of these areas. Beckstrom was promoted to the director's role in early 2007 when Khalili became executive director of housing and dining.

Beckstrom came to campus dining via a roundabout route, after attending the University of Nebraska for an undergraduate degree in business and later earning her MBA at Pepperdine. She'd started in foodservice at 17, cooking in a retirement home. Before taking the job at Boulder, her career in foodservice management included stints in hospital foodservice, a Meals on Wheels program, hotel catering, retail foodservice, and several years as a nutrition director in a southern California school district.

“Kambiz gave me a strong team and very strong mentoring,” Beckstrom says, adding that it was clear from the beginning that the department was focused on driving change.

“One of my first assignments was to work with Mike Knapp, our procurement coordinator, on a re-engineering study of our procurement process and the truck fleet we use to redistribute food from our warehouse,” she remembers. “The campus is restricted in terms of large truck access and we knew there were savings to be had from better logistics.”

The results from that effort helped dining re-structure its system and negotiate the “semi-prime” vendor contract and campus truck fleet re-distribution system it uses today.

“It was also a time when we had begun implementing computerized menu production management and point-of-sale systems, and that was a challenge for many on the staff,” Beckstrom adds.

Beyond that, “we had five, all-you-care-to-eat dining halls. One of them — Kittredge — was very inefficient and clearly had to be replaced. We also wanted to establish retail operations to satisfy the growing convenience needs we had in various corners of the campus.”

Beckstrom is a firm believer in benchmarking and recently brought in three foodservice experts from peer universities to conduct a formal NACUFS Program Review. using the NACUFS Professional Practices Guide.

“We have to document our efficiencies and demonstrate that our operating model is successful,” Beckstrom notes. She's worked for several years to implement a continuous quality improvement program, but this year she has begun to implement the use of a Six Sigma tool, Capability Maturity Modeling.

“It's an approach to evaluating different aspects of a business and seeks to pinpoint where the operation stands on a continuum,” she explains. “It helps identify where you are, where you want to be and what changes are needed to get there.” (see “Continuous Improvement is a Journey”)

Dining receives monthly P&L reporting for all of its operations, with weekly food cost reports from the C4C stations. Beckstrom acknowledges that raw food costs run somewhat higher than that of peer institutions. But due to the efficiencies they've been able to achieve, “our overall expenses as a percentage of revenue have been maintained over the past six years and are very comparable to those of our peer group.”

Meanwhile, the dining services team had long been focused on improving culinary capabilities across its operations.

Executive Chef Kerry Paterson, CEC, came to UC-Boulder about 10 years ago and brought with him a new emphasis on the quality of food and service in spite of what were often limited facility capabilities.

“The new dining hall finally gave him a platform from which his creativity could really bear fruit,” says Beckstrom. “But he brought his talent and energy to our programs long before C4C was on the drawing board.”

Paterson had been hired in 2002, as the department was converting another of its traditional, straight line dining halls, Farrand, into the school's first open-kitchen operation.

“That pushed our culinary capabilities at the time,” Paterson recalls. A few years later, when the school remodeled Sewell, another traditional servery, “we pushed the team some more, adding multiple station concepts and other enhancements. We focused on changing the level of expectations for our team.

“We knew in the longer term something like the C4C would be in our future, but five years ago we couldn't have opened it — our skill levels weren't there yet. By the time we did open it, those chosen to staff it wanted to be there. They had to apply for the new positions and were selected because they had extended their capabilities over the years.”

One key to Kerry's approach was the apprenticeship program he initiated in 2003 that takes advantage of and helps sponsor a two-year program administered by the local chapter of the American Culinary Federation (ACF). In it, participants from across the region go to school for 4-5 hours one evening a week at a culinary training facility the chapter rents at Metro State College.

CU-Boulder staff who have worked for a year or more at the DS-3 level can apply for one of three department-paid stipends to attend on their own time. Over 200 basic areas are covered, from basic knife skills to cooking methods and soup and pastry making.

“Our support of this began as a way to establish a formal approach to training for our culinary staff,” he says. “We wanted to prepare for a time when we could say, ‘If you want to apply for this position, you need to be qualified,’ and to offer existing employees a way to earn those qualifications.”

Sustainability’s role in the story

“The increased expectations at C4C have put demands on our staff, but the upside is that it means career growth for them. And the path we are on in terms of culinary and operations gives our people a path on which they can continue to grow.”

The certified LEED Gold C4C facility exhibits a wide range of sustainable building and operational features. These range from a highly energy-efficient building envelope and extensive use of recycled and sustainably certified construction materials to its highly energy and water efficient hvac, lighting and plumbing system and extensive use of gray, recycled and raw water.

On the menu side, the department has established natural, minimally-processed standards for its protein, with antibiotic free and vegetable-only fed beef, and the department plans to increase its use of natural, locally-grown and organic product to 25 percent of purchases by 2015.

At Farrand Hall, the all-natural/local/organic menu is offered as a grab-and-go part of the board plan, rather than as part of a discretionary dollar retail operation as is more commonly found in the college segment. Whether in the C4C or one of the other four dining halls on campus, “We train our culinarians to tell our story as they interact with customers on the front lines,” says Paterson.

“That also means providing lots of sensory cooking, with the sounds, smells and visuals of a high energy kitchen, culminating in food and flavors that reflect our program's quality.”