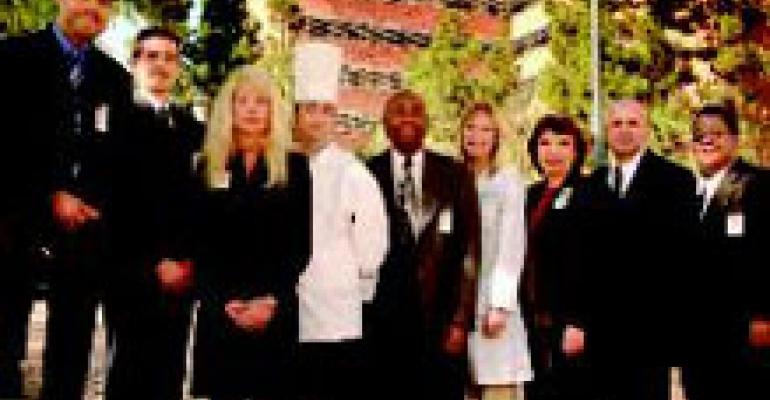 LUNCHTIME AT UCLA'S MEDICAL CENTER CAFETERIA IS ABOUT AS dense as it gets in the onsite environment. With about 7,000 building occupants, even staggered lunch breaks can only partly remediate the crush of people who show up between 11:30 and 1:00 p.m. each day.

That kind of volume would be the envy of many operators, but it isn't something you can take for granted. In fact, a lot of it was only potential business six years ago, when the retail sales that did exist were far from covering the cafè's operating expenses.

The transition of this cafè, from one having an annual $500,000 operating deficit to one making a positive contribution of over $1.2 million a year, is a primary reason why Carlton Green, the foodservice director was hired to turn it around, won a Silver Plate award in 2001.

Beyond the extensive cost management strategies and organizational re-structuring he implemented in the late 90s (patient meal costs were cut from $7.48/meal to $3.45/meal in the first year) there is also a lesson in retail management demonstrated here, one many foodservice directors can learn from.

While a significant part of the turnaround did come from savings and cost-cutting, another large factor was that the retail foodservice nearly doubled its top line sales in a few short years. That was accomplished with almost no capital investment, even as competition from scores of commercial lunch establishments increased on the city streets just outside Cafè Med's doors.

In fact, the cafè itself isn't that attractive by many contemporary onsite standards. The Medical Center-will move into a new facility by 2005, the result of much-tightened structural building codes in this earthquake-prone region, and for several years there's been a moratorium on making most improvements to the existing facility.

So without the renovation that is so typical of retail sales improvements of this magnitude, where have the top-and bottomline results come from?

An emphasis on collaboration
As overused as the phrase might seem, conversations with managers at the Medical Center's foodservices department point to one major change that set the stage for the department's turnaround: a concerted effort to establish a collaborative team environment to manage operations.

That emphasis and the staff buy-in that accompanied it helped generate the greater efficiencies needed. It also made possible the improved quality and appearance of the cafè's freshly-prepared food, a hospitality management program to match that food to customer needs and wants, and the successful grab-and-go program that has dramatically grown the cafè's impulse and convenience sales.

Green found his key collaborators among employees already on the department's staff. Early on, three were selected for additional responsibilities in purchasing/finance, culinary oversight and hospitalityservices. Today, all three have advanced to management roles and are integrally involved in running the department.

"Mark Dyball (now the department's executive chef) and I had always worked well together, and had a lot of ideas about how operations here could be improved," says Rey Hernandez, who today serves as the department's hospitality manager. "But our department was like many—it was managed in a way that made it very hard to bring new ideas to anyone's attention.

"That changed when Carlton arrived. It was clear from the beginning he was looking for suggestions about how to reduce waste, improve the menu and use our culinary talents more effectively. We asked him for an opportunity to present an action plan on ways to improve our unit's operations, and he gave us the chance to do that and to put some of our ideas to the test.

"We looked at how anything could be changed if it promised improvement: our production systems, our temp sheets, our sanitation standards, our garnishing procedures," says Hernandez. "We tried moving people around to test their individual strengths and find out how they best worked together."

As Dyball and Hernandez sought ways to streamline operations and production systems, Green tapped Guy Scimenes, then the department's buyer, to work with him on purchasing, inventory and vendor contract issues. Every purchasing arrangement in the department was reviewed and many were renegotiated.

"We wanted to be completely self-supporting, and getting a better handle on costs was key to making that happen," says Scimines, who today is the department's finance and purchasing manager.

"We evaluated the cost of meat, groceries, paper goods, disposables, our labor for restocking beverage coolers, equipment maintenance, everything. Then we looked at how those costs could be more effectively managed or reduced," either with different purchasing specs, by consolidating purchases with key suppliers, better portion control or a different labor allocation.

The product mix was also evaluated to ensure that it would support the menu mix Dyball and Hernandez were seeking to develop in the cafè. Existing and proposed menu items were costed out, adjusted or eliminated to ensure that there was nothing that could be sold at a loss. Financial reporting systems were enhanced to provide better budget feedback to a wider spectrum of staff.

"We all have to abide by the numbers and we are constantly communicating our budget performance of target vs. actual," says Scimenes. "That way the chefs can see how they've done with expenditures for food, meat, fish, poultry, and other categories and staff can see where and how the cafè is making its money. When there are cost variances, they can be compared with revenue variances to see if they are justified."

Revenue accounting was also tightened, especially to make sure that all transfer monies were collected and accounted for clearly in the monthly income statement. That included a debit-card residency program for medical students that accounts for nearly $1 million in annual meals, the medical center's meal ticket program for guests and a partnership with the university to accept "Bruin" card flexdollar purchases. All total, about $1.5 million in transfer credits now accrue to the department's revenue line on an annual basis.

Going for retail gold
With the cost side of the operation largely addressed, full attention turned to retail. Under Green, the cafè had already abandoned its previous policy of basing the cafè menu on the day's patient menu; Dyball and Hernandez had been experimenting with the breadth of cafè food offerings and stations, looking to their own staff for ideas, and seeking to collect more direct feedback from customers.

"We talked to our existing and potential customers and found we weren't offering them what they wanted," says Dyball, the cafè's British-born executive chef. "That's why they were going out to Westwood Blvd. or Charles Young Drive (main streets outside) to the commercial eateries there.

"We also made it a point to explore the specific interests of "micro groups" within our employee population," he adds, "those whose choices were dominated by salads, vegetarian, grilled and other fare. Such customers perceive variety differently, since they largely expect it within a more narrow part of the overall menu.

"We found that people wanted cookies. More bakery items, Fresh fish and fresh vegetables. Many things that simply weren't available from us at the time, but which could be. We got the cafè manager and the executive chef together, reconciled our direction, and structured the operation so there would be more cooperation. We didn't want to be seen as just another hospital cafeteria. We wanted to rise to the level of a well-run B&I account, and set that as our goal.

"We went from 4 oz. to 6 oz. servings of meat loaf," says Dyball. "We make our own demi-glace and our own onion rings. Fresh vegetables prepared to give the plates more color and texture. We elevated comfort food to more than the fast food you can get anywhere.

"Six years ago our deli station was terrible: we added a wider range of condiment choices, of breads or deli meats and other ingredients. We designed combo packages with soups and salads and made signature soups a key item. We developed Atkins diet-friendly sandwiches using low-carb bread for those who wanted them and began packaging gourmet sandwiches for grab-and-go diners. Now it's one of the most popular areas in the cafè."

Another major change: the introduction of an evening meal program customized for potential in-house customers, "instead of a program managed as a 'necessary evil,'" Dyball says. There is less traffic in the evening, "so the menu can focus more on display cooking techniques and specific customer requests."

Twenty-seven different nationalities are represented by employees in the kitchen, "and we looked to tap the expertise those individuals have in their own regional cuisines and comfort foods," he adds.

Doesn't this kind of experimentation raise food costs? "It does make purchasing food less predictable," Scimines says. "But we try to use ingredients we already stock or can obtain readily from a broadline distributor. It is very important that production, purchasing and retail are in sync—it's one of the areas where a collaborative environment really pays off."

Cafè revenues have increased 80% since 1996, while employment at the hospital has remained virtually flat. Food costs hover at about 40 percent, labor at about 35 percent. "Our revenue increases and the fact that we ensure profitability have given us a lot of credibility with our senior administration," says Scimines. We benchmark with Solucient and are much more productive than we were before."

In an environment where virtually every other service the hospital provides is billed externally, with payments often outstanding for 90 days or more, "our cafè revenue is an anomaly," says Green. "The consistent monthly cash flow has real value and that is something we emphasize to our Administration."

Adds Scimenes: "We weren't seen as a revenue-generating center before 1997. But since then, we've worked to educate the budget office and financial services people to the idea that we offset our costs by our retail revenue. At the end of the day, we want to speak their language, and express the cafè sales as revenue per patient day."