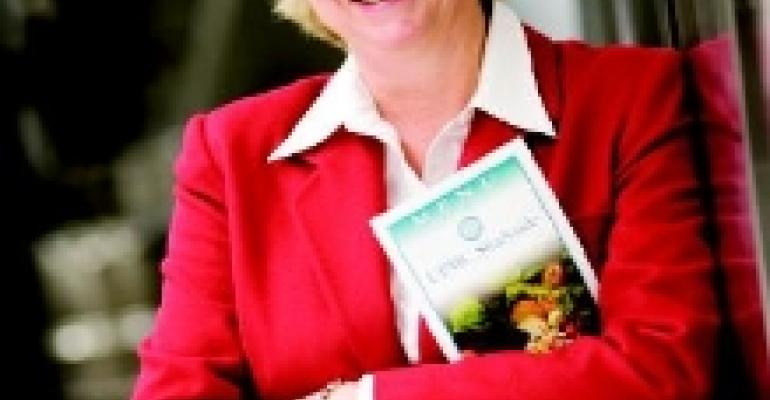 Control is a source of comfort for the typical institution. So when Pittsburgh's UPMC (University of Pittsburgh Medical Center) Shadyside Hospital began experimenting with a liberalized menu approach—in effect ceding much of the control over food choices to patients who need to watch what they eat—there were more than a few skeptics. Initially, they even included Joyce Scott-Smith, MS, RD, director of food & nutrition/dietetic internships.

But the approach worked so well in trial runs that Scott-Smith was soon convinced and now speaks with the fervor of a convert.

"We are not saying that therapeutic diets don't have a role, or that nutrition is not something we pay attention to," she declares. "What we are saying is that while you are here, our main objective is to get you what you want so you can get strong. Our second objective is to educate you so that when you go home, you can assume responsibility for your diet. Simply restricting you while you are trying to get better is not necessarily the best way to introduce you to a longer-term lifestyle change."

The liberalized diet approach gives patients who need to modify their diets what is in effect a trial run of dietary decisionmaking while they can still be monitored and guided. The liberalized menu used by Shadyside Hospital and, more recently, its sister institution, UPMC Presbyterian, reflects the "real world" food environment patients encounter after being discharged.

The choices on the menu range from "healthy" options like tuna salad on whole wheat and frozen yogurt to everday selections like lasagna and cheesecake, made just as they would be in the wider world, with no modifications for salt, sugar, fat, etc. Patients are encouraged to make their own choices after an initial education session. Followup counseling is provided as needed.

The program has proved successful not only in its primary mission of educating patients, but also in increasing patient satisfaction, reducing waste and promoting dietary department morale. Part of a larger patient satisfaction initiative in the hospital system, it has also positioned nutrition services as a crucial player in the larger institutional effort, bringing the department some welcome recognition for its role in the hospital's array of services.

That recognition also extends to the larger healthcare foodservice community, where the liberalized diet program has given Scott-Smith and UPMC some celebrity status. A recent teleconference sponsored by the Society for Healthcare Foodservice Management (HFM) about the program recorded the largest participation for such an event in the organization's history, with more than 2,000 individuals from 350 sites tuned in. When the teleconference finally signed off, there still were some 40 individuals in the queue with questions to ask.

What's the Big Deal?
On the surface, giving patients some more control over their food choices doesn't seem like that big a deal, yet the approach has remained controversial. For healthcare professionals, any change that threatens to make the health of a patient worse, even if only marginally, just cuts against the grain.

"Traditionally, we make an assumption that while you are eating here in the hospital you are more nutritionally supported, and that in turn aids in the recovery process," Scott-Smith says. Compromising that assumption, even for potentially greater benefits down the line, requires a mindset shift that doesn't come easily, she adds.

"Liberalized diet systems have been talked about for years, but there hasn't been much documentation to show the impact in the literature," Scott-Smith explains. "Consequently,it has remained largely theoretical. That is why one of our goals was to take the idea and execute it in a way that would serve as a model for others."

From an operational standpoint, a liberalized diet approach demands, among other things, a significant alternation of the typical hospital patient menu.

"The traditional patient menu is designed to accommodate a multitude of diet restrictions," Scott-Smith explains. "Dishes have to be prepared in several different modifications—low salt, low fat, no sugar. A liberalized approach dispenses with all that in favor of a more general menu. It sounds easy but in fact it poses quite a challenge because it has to offer variety while reflecting the preferences of the patients."

Shadyside conducted patient focus groups and food preference surveys before coming up with its menu, a deceptively simple document that looks like it was lifted from the coffee shop around the corner. Baked Tilapia is about as adventurous as it gets, but this reflects the conservative culinary preferences of the hospital's clientele, says Scott-Smith. "We wanted it to look like what they would eat at home or at their favorite restaurant."

The result is a selection replete with comfort food favorites like Pasta and Meatballs, Meatloaf, Grilled Ham & Cheese Sandwich and Frosted Carrot Cake. These are balanced by a selection of healthier alternatives (tagged on the menu with a "heart healthy" symbol) that are lower in fat, cholesterol and sodium, such as Baked Chicken Breast, Grilled Salmon, Sugar-Free Gelatin and various vegetable sides.

Portion size replaces raw nutritional profile as the primary health message. "Rather than eliminating certain foods as 'unhealthy,' we prefer to send the message that there are no 'bad' foods as long as you eat them in reasonable amounts," Scott-Smith says. "Hopefully, this teaches patients that they can still eat the things they like as long as they don't overdo it."

Indeed, education is a key aspect of the liberalized menu program. After a patient is admitted, a dietary representative visits with a copy of the patient's ordered diet, along with a copy of the liberalized diet guidelines. The process is explained, including an emphasis on education to cover future diet modifications that may become necessary after the patient is released.

"We give them guidelines on how to use the menu, what the 'heart healthy' icons next to some selections mean. We also explain why the liberal options are there," Scott-Smith relates. "We then encourage them to choose as well as they can."

When orders come down to the kitchen they are reviewed against each patient's diet restrictions.

"If they make more than three errors a day over three meals, or if they are exceeding what's allowed under the liberal guidelines, we go back and work on the education some more," she says. Patients who clearly and repeatedly violate their restrictions can be classified as non-compliant by a physician (see sidebar on p. 32).

For the nutritional associates who do the patient menu counseling, the challenge is to strike a balance between encouraging free choice and stressing the implications of that responsibility.

"In the end, we know we can only do so much," Scott-Smith says. "Once the patient is out of here, they're on their own, so forcing them to comply for the short time they're here makes little difference in the long run. What we want to do is modify their behavior so that they will continue to make good choices in the outside world."

An Institutional Initiative
The roots of the liberalized menu program stretch back several years, to when the UPMC Shadyside had received a grant from the Robert Wood Johnson Foundation to fund the exploration of new approaches to bedside care. Each department was challenged to come up with new "out of the box" ideas on how to achieve this. For the nutrition services department, patient meals were an immediate focus, as they had been a constant complaint on patient satisfaction surveys.

Naturally, the conventional changes were immediately considered, such as feeding visitors, for example. "But these were just minor little tweaks to the existing system," Scott-Smith concedes. "We soon ended up looking for an entirely new model of nutrition care."

When the idea of trying a liberalized menu approach was broached, Scott-Smith was not enthusiastic. "I am a dietitian," she says. "My training and experience argued against loosening control over patient diet choices because of everything we know about how much diet can impact health. It was actually our administrator who first got behind the concept. She liked the idea of coming up with something different, although she wasn't sure how this sort of program could be implemented."

Trial runs with select units began in 2003 at Shadyside and proved so successful that Scott-Smith couldn't help being impressed.

"My enthusiasm grew as we took progressively larger steps, and found that, the more we tested, the more the evidence just repeatedly said, 'This is the way to go!'" Patient satisfaction with the new program was high, and the fears about how it might impact their health proved largely unfounded.

A critical factor was that the new program made nursing—always a major consideration in a critical care environment— happy, Scott-Smith reports. The traditional system had caused a lot of patient grumbling, which of course made the nurses' job harder.

"We used to edit menus," Scott-Smith recalls. "There would be a diet order, and we would compare it to an approved meal pattern and then made additions or subtractions. Unfortunately, there was no mechanism for then telling a patient what we had changed, with the natural result that we got a significant number of trays returned partially eaten. And of course that was associated-with our low patient satisfaction scores." As happier patients make happier nurses, the goodwill earned by nutrition services with nursing became a highly valuable side benefit of the liberalized menu program.

Nutrition services also found allies among the physicians. "We had to find champions," Scott-Smith says. "And we did. We found specialists who were respected by their peers who supported our effort."

Once the test phase of the program showed that the liberalized menu approach was not only feasible but highly desirable, full implementation commenced. This was completed in August 2004 at Shadyside and earlier this year at Presbyterian.

Rollout will continue into the other UPMC facilities as well as into other healthcare institutions across the country, consistent with the original vision behind the RWJ grant that best practices developed in one institution that proved their worth would be shared.

Scott-Smith consequently is quite busy these days sharing her department's experience, but she doesn't mind. Not only does the success of her "liberal agenda" mark Shadyside as a pioneer in patient bedside care but emphasizes the value of nutrition services in a clinical environment. "It puts us on the short list in terms of being one of the key players in making patient care programs successful," she says. "And we want to be a core business player!"