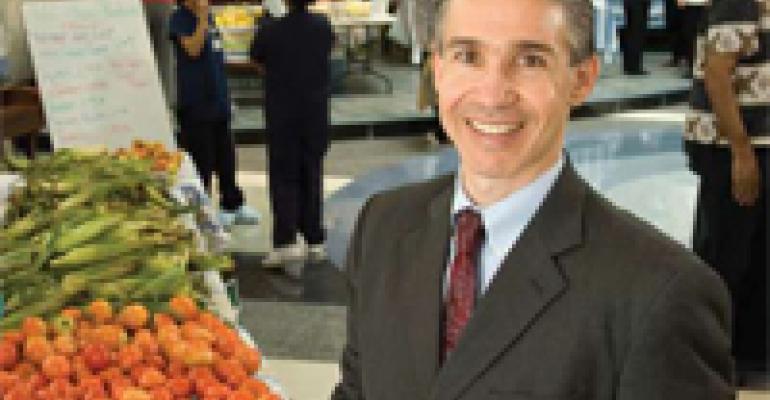 The Rise of UNCH Dining

Angelo Mojica is a man on a mission. The director of food and nutrition services for the multi-complex University of North Carolina Hospitals came to the institution three and a half years ago determined to change the way in-house dining is handled. His goals: to increase patient satisfaction, deliver solid financials and develop a stronger retail focus.

So far so good. Patient satisfaction scores have rocketed from the low single digits when he first started to the 76th percentile today, retail revenues are up 50 percent in the past year and department employee satisfaction is now leading all other in-house service departments.

Mojica is one of those high-energy, can't-get-the-words-out-fast-enough directors who exudes confidence and seems to have ideas to burn. He is a voracious learner who joined management company Morrison Management Services earlier in his career partly because the company had an opening in Rhode Island. That allowed him to enroll at Johnson & Wales University and earn a culinary degree.

“I didn't like chefs snowing me about what they were doing, so I decided to learn more about the science of food for myself,” he explains.

The CEC he earned at J&W joins the RD he earned as an undergraduate. Mojica also holds a masters in public health from UNC and is a licensed nursing home administrator. Mojica puts the graduate degree to use as an associate professor in UNC's School of Public Health, where he says he enjoys augmenting the theory he teaches with some practical lessons learned from his experiences as a director.

“Becoming director at UNC Hospitals was literally the job I always wanted,” says the native of Brooklyn, NY. “I fell in love with the place when I came here for graduate school.”

At the time, the UNCH dining program emphasized efficiency and cost containment. According to Mojica, patient dining revolved around a traditional trayline operation that assembled meals using mainly frozen and prepackaged components. The meals themselves were all designed to meet the standards for low-sodium and low-fat diets even if the patient was cleared for a standard diet.

Retail operations were outsourced to local operators and national brands while catering used excess production from the trayline to meet everyday obligations. For more elaborate events, outside caterers were engaged.

UNCH is a rapidly expanding institution that in the next year will add about a hundred additional beds to its core group of four facilities. It has also embarked on a major project to build a new cancer hospital, scheduled to open in 2009, that would add more beds.

Given that, Mojica felt it could financially support changes in the program that would lead to greater patient satisfaction and increased retail sales.

In addition to the food upgrades, Mojica also upgraded the coffee served to patients, switching to Starbucks branded brew on patient trays. Mojica says UNCH is the only acute care hospital in the Southeast that does this, though the initiative has not been problem-free. Since Starbucks doesn't make logoed sleeves for the 8-oz. cups used at UNCH, Mojica was forced to use generic sleeves that obscure the prized Starbucks logo until recently finding a transparent alternative that lets patients see the product name.

The first really big change, however, took about two years, as Mojica overhauled the patient menu to end the focus on universal modified meals.

“Most patients are on regular diets,” says Mojica. “Making every patient eat meals low in fat and sodium is not necessary.”

So Mojica and Associate Director of Production Jim McGrody worked to develop a new menu based on standard selections that are still nutritious but look and taste more like restaurant dishes.

Meanwhile, for those on restricted diets, McGrody developed an entirely different menu rather than simply modifying the standard selections to meet the low-sodium or low-fat requirements. Instead, the new modified diet menu has dishes specifically designed to meet the restrictions by using ingredients like herbs and spices to add flavor. For low-fat diets, UNCH menus dishes that are naturally low in fat rather than watered down versions of dishes that are usually higher in fat.

The change was made possible by the implementation of a new nutrition analysis and production control system that gives the department greater flexibility in designing its menus.

The new menu debuted in April 2007 along with a whole new patient dining production and delivery system. To foster greater connection between the nutrition services department and its customers in the wards, Mojica convinced the hospital to allow his staff to deliver trays and take orders directly at bedsides.

Department employees were recruited to serve as patient nutrition representatives (PNRs) responsible for taking orders directly from each patient, assembling that order and then taking it to them.

The order for each meal is taken when the previous meal is delivered, ensuring a greater likelihood of satisfaction. “Previously,” says Barbara Lusk, associate director of clinical nutrition/patient service director, “patients had to fill out their menu forms the previous day. Now, with less time between putting in the order and getting the meal, patients are more likely to get what they really feel like eating.”

The PNRs now take their orders on penpad computers that download them electronically to the central production kitchen. There, the old trayline has been jettisoned in favor of six tray assembly stations where servers plate entrees per each PNR's direction.

The PNRs then finish each tray, using their knowledge of “their” patients to customize each (within diet parameters). The PNRs then take the assembled trays up to their wards in temp control carts and serve them to each patient, taking the order for the next meal at the same time.

The new bedside order taking has already resulted in a reduction in waste and, along with the new menus, catapulted patient satisfaction from the 11th to the 75th percentile (92nd percentile for those on regular diets) on the Press Gainey scale.

Mojica says he will eventually evolve patient dining to a room service system once the new cancer hospital and patient tower are finished. That project will give him another kitchen, one designed specifically for room service production, something not feasible with the current kitchen. He says the Womens, Childrens and Cancer hospitals are “great candidates” for room service, while the other facilities will remain with the bedside order taking system, using the current central kitchen as the center of operations.

The patient satisfaction score increases are certainly dramatic, but not any more so than the explosion in retail sales, which grew more than 50 percent in the past year, from $4.3 million to $6.8 million. That is even more remarkable when one considers that the increases were generated even as the department converted from the outside management concepts to the beginnings of a self-operated retail environment.

The first in-house operation, a small temporary location with two stations appropriately called the Corner Café, opened late last year. Though it is only open for breakfast and lunch and has almost no seating, Corner Café generates some $4,500 a day. It includes a made-to-order deli and self-developed branded Mexican concept called Bandaleros that Mojica freely admits is based on the popular Chipotle, Qdoba and Moe's national chains. Like the deli, it offers to-order burrito sandwiches and salads for which customers can choose their own ingredients.

The other current retail outlet at UNCH is a seven-station food court located on a mezzanine above the childrens hospital's main concourse. Opened this past February as the Terrace Café, it features a series of self-branded concepts, is open around the clock and serves up to 3,000 customers a day.

Like Bandaleros, the concepts in Terrace Café are the product of Jim McGrody's imagination. The department's top culinarian not only developed the concepts and menus, but also concocted elaborate back stories for his brands. These are detailed at each station and provide some extra customer engagement, but it is the food that brings crowds of staff and visitors to Terrace Café.

For example, Cosimo's Pizza features not only fresh pies but also salads and Italian style entrees. The Flat Iron Grill offers fresh, to order grilled items. Chefs on the Move has made-to-order entrees such as pan-seared scallops over linguini. Carolina Chicken Co. has barbecue, and gourmet quality entrees sit ready at the Continental Traders station.

Desserts can be grabbed from a rack in the middle of the serving area and there is even a fresh-squeezed lemonade stand to augment the beverage choices on select days. For those in a hurry, there is an extensive grab-and-go cooler featuring everything from salads and sandwiches to sushi and hummus in the Fast Breaks section.

Mojica has several new retail outlets that are currently in various stages of planning and construction. One is a cafe with ample seating expected to open later this year. It will include a pair of concepts that will menu from-scratch soups, grilled flatbreads and made to order salads along with artisan breads and gourmet baked goods and pastries.

The venue will also extend UNCH Dining's “green” credentials, as it will encompass not only the department's composting program by using completely compostable packaging and tableware, but will also utilize local produce as much as possible.

Local foods are already being incorporated into menus where possible, and Mojica has highlighted this connection by initiating a series of weekly farmers markets during the summer growing season. Each Wednesday, a group of local growers come and set up stands in the spacious front lobby area of UNCH's children's hospital (see cover photo), giving staff and visitors a chance to purchase fresh local product, and giving the participating farmers a chance to make connections with customers.

A more ambitious project is an extensive retail venue that will be part of the new cancer hospital. Scheduled to debut in November 2010, it will be a coffeehouse concept that will offer comfortable couch seating and a large outdoor patio garden. It will menu an extended line of grab-and-go food selections (onsite meal preparation was dropped because of fears that cooking odors might filter up through the facility and disturb oncology patients).

The coffeehouse is expected to be a branded operation designed to be a prototype of a new, extended version of a traditional small-footprint coffeehouse venue.

In addition to the quality of the food choices, retail sales have also been boosted by a cashless payment option from FreedomPay that earns users a 20 percent discount. It currently accounts for about a third of retail sales, with another third coming from traditional credit card payment and the rest from straight cash.

Mojica justifies the discount accruing to the FreedomPay payment option because it increases the speed of transactions and allows more customers to patronize UNCH's fairly small retail spaces.

Currently, about 2,500 customers have signed up for the program, including about a thousand from the nearby school of medicine for whom UNCH's retail dining outlets are an increasingly attractive option.