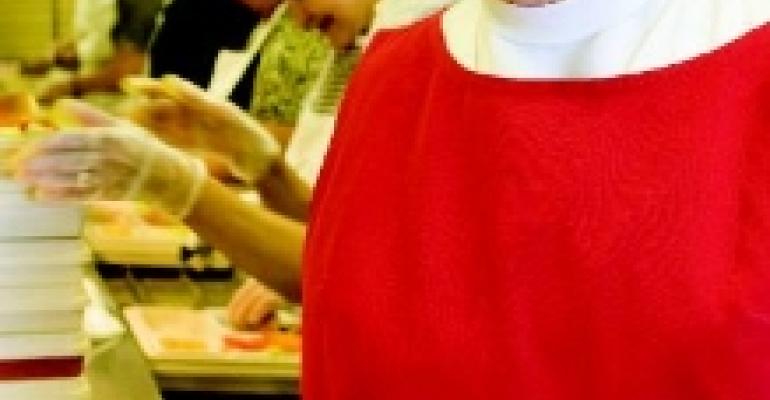 If faith can move mountains, Sister Alice Marie Quinn could uproot the Himalayas and transport them to the moon. A nun who entered the Roman Catholic Daughters of Charity of St. Vincent de Paul order in 1954, she has relied on her faith, mixed with a very healthy dollop of drive and determination, to serve those less fortunate than herself for more than 50 years.

Today, Sr. Quinn directs the Senior Citizen Nutrition Program at St. Vincent Hospital in Los Angeles, one of the nation's largest private-meals programs. Her production kitchen turns out more than three thousand pre-portioned meals a day and will serve more than a million this year.

The majority of the meals prepared in her program's spartan-but-spit-and-polish kitchen facilities go to elderly Meals on Wheels clients. The rest are sent to various institutions, including three schools, several senior day care centers, a social service agency and a homeless shelter. Her program even delivers a few meals each day to individuals outside her delivery area who are on waiting lists for other programs.

A tireless worker who puts in 12-hour days six days a week (it used to be seven but she was recently convinced to "slow down"), Sr. Quinn runs a tight ship and demands only what she also expects of herself. In return, she is as relentless in advocating for her staff as for her clients. They receive wages comparable to the private sector and even those who work as little as 20 hours a week receive health benefits.

To keep her program fiscally secure, Sr. Quinn keeps a tight watch on the budget and works tirelessly to raise the donations needed to bridge the shortfall between expenses and the revenues generated from paying clients. This year, that shortfall is expected to be some $5 million of the $6.6 million budget.

Sr. Quinn is also active in the larger foodservice community, serving as the current president of the Meals on Wheels Association of America.

For her dedication to her mission as well as for the supreme efficiency with which she manages her operation, Sr. Quinn was named the recipient of the 2006 Silver Plate Award in Specialty Foodservices.

Originally a native of Chicago, Alice Marie Quinn heard the "call of God" in her late teens while volunteering with Daughters of Charity nuns who were working with the poor in El Paso, TX. She had originally intended to study to become a nurse, but the experience directed her toward another vocation instead.

So on June 15, 1954, her nineteenth birthday, Quinn joined the Daughters of Charity, an order of nuns who take a special vow to serve the poor.

After getting her dietetics degree, Sr. Quinn worked for more than 20 years as a dietitian in Daughters of Charity hospitals in New Orleans and San Francisco. Then, after several more years spent organizing service departments at her order's mother house in Los Altos Hills, CA, she realized "I needed to get back in the kitchen."

She spent an unhappy year as an assistant director at St. Vincent's, then went back to the order and pleaded for a change. They told her to "go out into the community and see if there is a need that you can fill." That's when she found her calling with the elderly.

Sr. Quinn's first foray into senior feeding was a congregate dining program in a Catholic church hall in Los Angeles. Soon, however, she found that there was an additional need to deliver meals to the homes of seniors who couldn't get to the church. So she started the area's first Meals on Wheels program in January 1978. From an initial clientele of 24 "it just started to explode and it never stopped," she recalls.

As the demand grew, she was urged to start a waiting list, but, typically, her reaction was compassionate, pragmatic and stubborn—"How can you make people 'wait' to eat? We have the facilities and the volunteers, so let's feed them."

Originally a one-nun operation (with assists from a couple of parish volunteers), the program outgrew the church facilities and eventually moved into the St. Vincent facility.

Today, the program utilizes four cooks and several hundred paid staff and volunteers to feed a growing and varied clientele.

After talking with Sr. Quinn for a few minutes, one begins to appreciate just how strongly faith and independent thinking are mixed in this 70-year-old woman hobbling around on two artificial knees. On the one hand, she professes an absolute belief that whatever her program requires will be forthcoming in some way, since "God always said he'd take care of the poor."

On the other hand, she is a status quo challenger par excellence and stubborn in sticking to her core principles. These include an uncompromising respect for her clients' personal dignity. Hence, St. Vincent clients are served hot, attractively presented meals all seven days of the week.

Each meal is not only nutritious and tailored to the medical and religious needs of the recipient, but takes the individual's personal preferences into account as well.

When Sr. Quinn is in charge, there is no "take it or leave it" and beggars can indeed be choosers.