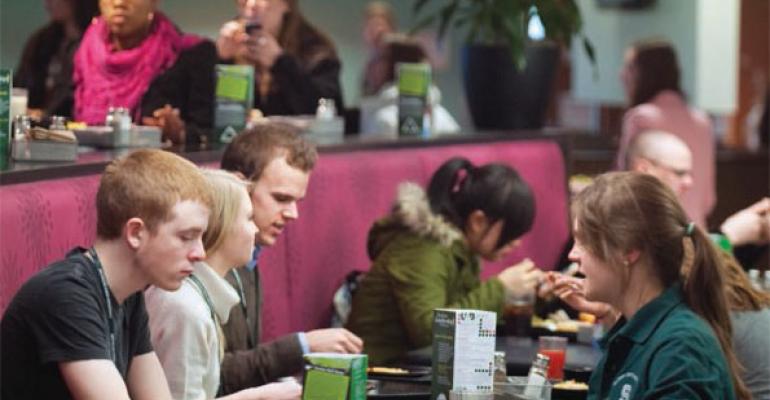 The Spartan Diet Gets a Major Makeover

AS YOU ENTER THE NEWLY RENOVATED South Pointe Cafeteria at Case Hall on the campus of Michigan State University, the first sight you see is Great Lakes Plate, a food station that emphasizes dishes associated with the upper Midwest, made with locally sourced, authentic ingredients. On the day FM visited, the lunch fare included Five-Way Cincinnati or Vegetarian Chili, Bread Bowls and Smoked Brisket Sandwiches. On other days, it ranges from Cornmeal Dusted Rainbow Trout and Duck Hash to German Pork Chops and Roasted Michigan Turkey.

Great Lakes Plate is the centerpiece of South Pointe, which reopened in January after seven months of renovations costing $20 million, the latest project in an ambitious long-term initiative designed to revolutionize residential dining at MSU.

“It is something we feel we need to do to remain competitive in our market place to assist with student retention,” says Guy Procopio, director of culinary services. “Our goal is to put the glamour back into food for our guest and for our staff too. We have intentionally, de-institutionalized food services.”

“Glamour,” it is fair to say, was not the first word that sprang to mind about campus dining at MSU for most of its history. Instead, a network of up to a dozen traditional dining halls dispensed filling, satisfying and comfortable fare to more than 15,000 resident students on “Traditional 20” meal plans. Twice that number of non-resident students attended classes on campus, but for most, their only brush with campus dining was to swarm the nationally branded QSRs in the student union and International Center food courts at midday.

That is changing fast. Today, MSU knows that campus dining is a key factor for students when they evaluate prospective school choices. So two and a half years ago, MSU's Division of Residential and Hospitality Services reinvented itself, realigning departments to create more synergies and drawing up a strategic plan that included the following major components…

The goal, as Vennie Gore, the division's assistant vice president said at the time, was to “lead with food.”

Michigan State's dining program has long been one of the largest in the country, as well as one of the more celebrated. Two former directors, Ted Smith (1980) and Michael Rice (2007), have won Silver Plate awards for their accomplishments.

Following Rice's retirement in 2008, MSU restructured its housing and dining into four departments, one being Culinary Services, where residential and retail dining operations were consolidated for the first time (previously, residential dining was under the housing umbrella), along with concessions, retail stores and the campus bakery.

Named to lead this new unit was Procopio, previously the head of Auxiliary Services, who led an overhaul of Culinary Services that focused on developing a strong culinary and retail focus headed by a team of professionals.

The new culinary focus is personified by Kurt Kwiatkowski, the first corporate chef in the program's history with oversight responsibility for both retail and residential dining. Under Kwiatkowsi, dining centers are now overseen by dedicated culinary teams consisting of an executive chef and one or more sous chefs. This approach not only “gets us back to cooking,” as Kwiatkowski declares, but also allows each center to serve as a somewhat unique dining destination.

Kwiatkowski also oversees menus in the self-branded retail operations and for concessions. This helps control production costs so that retail offerings can be incorporated into meal plans through the Combo-X-Change program (see below).

The model for what residential dining at Michigan State debuted in the fall of 2007 with the opening of The Gallery, a marketplace style eatery with multiple food stations featuring exhibition style cooking and to-order selections.

The Gallery quickly became the most popular dining spot on campus, at one point generating up to a quarter of all daily resident dining hall traffic.

The Residential and Hospitality Services Strategic Plan drawn up under Gore envisioned a series of dining halls sporting the Gallery's approach, but each with its own distinct concept mix. The venues, all renovations of existing dining halls, would be scattered across MSU's six planned new living/learning “neighborhoods.”

Complementing these unlimited access all-you-care-to-eat venues would be a mix of Sparty's branded retail outlets (see sidebar on p. 26). In addition, retail food courts in the student union, International Center and the Owen Hall graduate housing complex would continue to offer a mix of concepts.

“The dining centers would serve as each neighborhood's kitchen where students can get regular meals, while the retail serves as the pantry where they can grab something quick or to take back to their rooms,” is the way Procopio describes the approach.

The first major step came in late 2009 with the renovation of Owen Hall, a graduate housing complex where the existing café was converted into the Riverwalk Market, a retail facility with grill, pizza, coffee/bakery, international and homestyle entrée stations, plus grab-and-go.

The fall of 2010 saw the opening of the massive Brody Square Dining Center. Renovated at the cost of some $49 million, it boasts nine stations ranging in theme from Southwestern and pizza to sushi, homestyle and vegetarian/vegan stations.

A year later, Holden Dining Center opened, followed in January 2012 by South Pointe at Case Hall Dining Center. Next on the docket is the renovation of Shaw Dining Center, which will close later this year and reopen next January. At least two other renovations are tentatively planned for the next four years, at the end of which all six neighborhoods will have at least one newly renovated dining facility within its environs.

A significant component of MSU's dining operation is the meal plan. Traditionally, MSU, like most other large state schools, offered plans such as the mainstay “Traditional 20” that could only be used in the residential dining centers. A debit style cash program was introduced in the late 1990s, but it was separate from the residential meal plans because retail and board dining were operated by separate departments.

When retail and residential dining were consolidated, the way was cleared to offer a more flexible plan incorporating meals taken at 23 retail locations through a feature called Combo-X-Change. A huge success, Combo-X-Change entitles the plan holder to one meal composed of an entrée/snack/beverage combination each weekday.

Another big change has been converting from a block structure to allowing plan holders to patronize any all-you-care-to-eat dining hall any time it is open, as often as desired.

“It was something we saw work at the University of New Hampshire and felt could work for us as well,” says Bruce Haskell, associate director of residential dining. Today, the department offers three residential meal plans, all with unlimited access.

Meanwhile, non-resident meal plans now offer access to the all-you-care-to-eat dining halls — including the alluring new ones such Brody — along with Combo-X-Change options. What has made them even more attractive starting this year was the elimination of expiration dates. Now, an account balance carries over across semesters and even school years.

“That has proved to be really popular because it takes out the risk,” Procopio says. Non-resident meal plan sales were already running some $750,000 ahead of the previous year as of early February and he anticipates sales this year (2011-12) will double 2010-11's total, reaching $3.6 million.

THE STRATEGIC PLAN to reinvent dining services at MSU is part of a larger initiative called 2020 Vision: A Community Concept for the Michigan State University Campus. First unveiled in 2001 and updated several times since, 2020 Vision seeks to position MSU to meet the needs of 21st century students. A significant component of this plan calls for the development of a series of six “neighborhoods” across the campus, with each providing onsite amenities to its resident students, amenities that prominently include a mix of residential (all you care to eat) and retail dining.