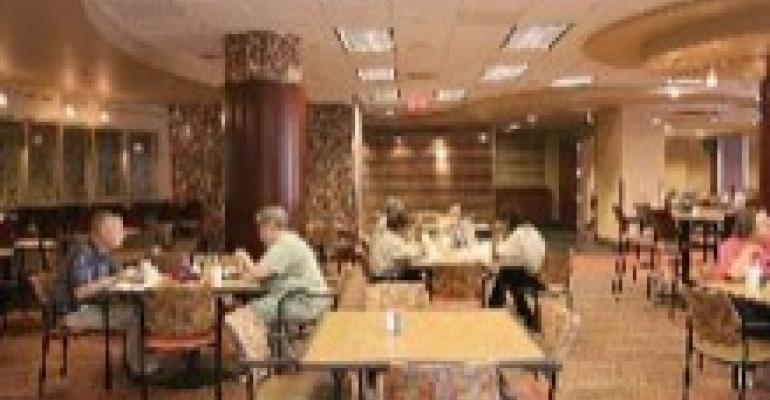 Tear Down the Walls

Every once in a while, there occurs a "perfect storm" convergence of unpredictable, divergent forces that moves a healthcare foodservice renovation project front and center and even over the top. That's what happened at DCH Regional Medical Center in Tuscaloosa, Alabama. Last November, the 583-bed facility opened a new retail operation called Patio Grille and cafe that reflects a facility commitment to top-of-the-line quality and a dollar investment in foodservice operations that are rare in healthcare.

The fact is that administrators in healthcare, where industry performance standards are almost totally focused on costs, are a very tough sell when it comes to proposals that require a capital commitment. That's why healthcare foodservice directors have so much trouble expanding or renovating their operations. Return-on-investment arguments don't carry much weight with their bosses and projections of increased revenues don't get much attention, either. It's the competition with medical departments for scarce capital that stops projects cold.

The convergence of the "perfect storm" factors at DCH began in 1997, according to Dexter Hancock, R.D., DCH Health System's director of nutritional services. That was when a change in hospital administration resulted in the arrival of John Winfrey, the system's new chief financial officer (CFO), "who told me the first thing he noticed was that the cafeteria had to be redone."

Severely undersized retail seating capacity had been a problem for years, and Hancock had hired a foodservice consultant the year before to design a modest cafeteria expansion to increase it.

The project underwent several incarnations as options were considered and reconsidered, until a final presentation was made to the DCH capital planning committee in 2003 (see sidebar, below). It was at that meeting that Bryan Kindred, the president of the four-hospital DCH Health System, said, "I don't know what we are waiting for."

Setting the Stage
The stage had been set for a $4.2-million project that would create a dazzling environment to almost triple the employee/visitor cafeteria space and take the menu to new levels.

Meanwhile, there were other forces at work in moving the project forward. Under new leadership, the DCH System had recently rewritten its own mission statement. DCH is nearly 100 years old, with historic roots in the community.

Although it retains much of its country charm, Tuscaloosa is a booming Sunbelt City today and DCH has grown into one of the largest medical centers in the state. It now operates four facilities and is recognized as a cutting-edge regional institution. The University of Alabama, only a stone's throw from the DCH front door, is also booming and has helped the local community attract a continuing inflow of high-tech business and industry, along with a more diverse and more sophisticated residential base.

The DCH system is investing in other ways as well: a $23-million cancer center is under construction and a new medical office tower is on the drawing board. Patient foodservices are also scheduled for an upgrade when the department introduces a room service program next year.

People Factors
There were also several "people" factors that were instrumental in the cafe project's progress. There was Bill Cassells, DCH administrator, who is an amateur chef with a real interest in quality food and who lent his personal enthusiasm to the project. There was Gary Lane, a new executive chef , who has a well-tuned retail mindset and proven culinary skills. Lane was hired in 2001 to replace a retiring cook supervisor and has played a major role in the menu development that accompanied the cafe upgrade. And there was Hancock himself, who had the patience and tenacity to keep the project top of mind for everyone from hospital planners to financial administrators.

From the first preliminary—and tentative —plans drawn up for the cafeteria in 1996, DCH's planning committee got serious about the project in 2003. The final design was completed in 2004, construction began in 2005 and the renovated Patio Grille & cafe opened in November 2006.

From Cook-Freeze to Fresh-Baked
Despite the bandwagon of support that kept the project moving, the basic ingredients for its success were in place from the beginning.

"They had the customer base," says Paul Hysen, the consultant on the project. "There was a tremendous, underserved population in place. They also had available capital and were looking for projects that would have long-term impact. And Tuscaloosa itself was changing. DCH wanted to reflect that."

The one thing no one had ever questioned was the need for massive renovation. When Hancock first arrived at DCH Regional Medical Center in 1994 as director of nutritional services, he already had a 28-year career in army foodservice that spanned the globe. What he found was a foodservice operation that was little changed from its original construction in 1976.

Cook-freeze production systems served both cafeteria and patient foodservice, with the food production kitchen on the ground floor and the cafeteria on the level above. The original cafeteria boasted a circle-serve rotating counter, a piece of technology that was a widely heralded "advance" when it was first introduced back in the 1960s (see sidebar on page 40). Operationally troublesome since their introduction, few remain in operation today; those who still operate them cannot purchase spare parts and typically face constant maintenance challenges.

Hancock's first innovation was to install a traditional cafeteria line and add a pizza station to the 18-hour-a-day operation. "It was the same menu at lunch, dinner and night and there were no grills," Hancock says. "Everything was prepared, thawed, warmed and served."

Even those modest changes were so wellreceived by customers that the cafeteria ran out of space for them to sit down. That's when the department began to eye an outdoor patio between buildings that was adjacent to the cafeteria.

In successive design conversations, the discussion centered on taking over part of the patio, then moving farther out and, finally, to enclosing the entire area. There was still no food production on the cafeteria level —no grills because there was no ventilation —so the potential for menu changes was limited. Adding production capability on the cafeteria level was a pretty large investment on its own.

The time for small, incremental changes in the cafeteria area was running out. The next step would have to be a giant leap forward but there were competing projects at DCH. "There had not been many capital upgrades in the hospital since the late 1970s and early 1980s so the emergency room, operating rooms and intensive care were first in line," recalls Hancock. "There was a great deal of catch-up work to be done."

While waiting their turn for funding, Lane worked on the menu for a self-service bar he installed in the middle of the old cafeteria and he expanded catering. Hancock finished up two other projects. First, he tackled a run-down vending area near the medical center's entrance that tended to encourage loitering by hospital employees. It was replaced by an upscale Seattle's Best coffee bar that is immediately visible to incoming visitors. The popularity of the facility—and the fact that it recouped its $125,000 capital investment in 2.2 years—was also a selling point in rallying support for the project.

Second, he readied plans for an in-house bakery operation that would start production six months before the completion of the cafe. Usually, on-site bakeries are considered an unjustifiable luxury item in foodservice operations, but that was not the case at DCH.

"Local labor costs are reasonable and fresh-baked goods are extremely popular here," says Hancock. "You don't have to sell that many pieces of cake at $3 a slice to cover two bakers and a helper." In the best Southern tradition, the bakery turns out corn bread, biscuits, scones, pies, layer cakes—virtually all of the baked goods offered on site except for sandwich buns and Krispy Kreme doughnuts. And once the Patio Grille opened, the bakery became a highly visible anchor at its main entrance.

Down-Home Favorites
The menu reflects the down-home favorites of Southern country cooking—fried chicken and biscuits are on the menu every day, hush puppies and okra are offered frequently, and you can get fried bologna and field peas on a pretty regular basis. Most of the hot Southern comfort foods are served on the self-serve Meat & Veggie Bar, which is the most popular of the cafe's seven stations. But there also are specialties on the Chef's Table, another station, that are new to many Tuscaloosa natives. Rounding out the stations are the Corner Bakery, Stone Hearth Pizza and Pasta, Druid City Deli, Patio Grille, and a soup and salad station.

With the opening of the cafe, menu prices increased, according to Hancock, but not significantly. The operation is not subsidized and the goal is to break even on employees, who represent 81 percent of customer volume, and profit on visitors. Employees get a discount off posted menu prices and approximately 60 percent of DCH employees use a payroll deduction plan that was implemented in 2001.

By just about every measure, Hancock says the Patio Grille & cafe has exceeded expectations—not just in its bottom-line revenue impact but by its impact on overall employee satisfaction, within the medical center and within the foodservice department.

In the long run, the Patio Grille & cafe is about more than delivering a new and improved foodservice program. It is also about delivering a message from DCH administrators to the Tuscaloosa community and to DCH employees and visitors that the people at the top are truly committed to compete at the highest levels of quality and service.