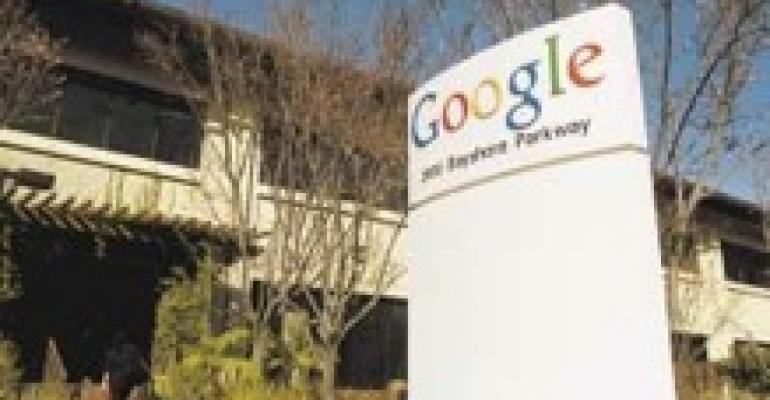 Why the Fooooood at Gooooogle Is So Goooood!

How would you like to have the guy who cooked for the Grateful Dead make lunch and dinner for you...every day...for free? Employees of Google.com's Mountain View, CA, headquarters operation do, and the chef in question, Charlie Ayers, may in turn have one of the most personally rewarding jobs in the foodservice industry.

Ayers, Google's executive chef, has complete autonomy in making up the menu and procuring the ingredients to prepare it (well, almost complete autonomy—after all, the customers have to like it). That gives him the luxury to indulge his preferences for organic and natural products, and to exercise his culinary imagination while experimenting with exotic ingredients in a way even many high-end commercial restaurateurs might envy.

To top it off, he also has stock options in the fast-growing Internet search engine company, which is expected to make a killing on Wall Street whenever it decides to finally go public. (Call it an incentive to stick around!)

Of course, Ayers's life is not all organic peaches and hormone-free cream. Twelve-hour workdays are normal (though weekends are free) and the pressure to design and prepare two full daily menus (lunch and dinner) five days a week is intense. Those menus must provide sufficient variety to satisfy a widely diverse customer base day after day. After all, menu fatigue doesn't disappear just because the food is free and of gourmet quality.

And Ayers has to do all this out of a cramped, antiquated kitchen better suited to flipping burgers and frying eggs over easy, though this will eventually be addressed when the company makes a planned move to a new headquarters facility.

Life after the Dead
Ayers is a Johnson & Wales culinary arts graduate who was born in Chicago and grew up in New York. He originally migrated to California back in 1990 and worked for a while with Restaurant Enterprises Group, a restaurant franchise company. Ironically for a chef who now prepares a significant number of vegan and vegetarian meals, he worked in the steakhouse division.

Later, he added to his experience (and California foodie credentials) with stints at such Bay Area culinary landmarks as Blue Chalk Cafe, Left at Albuquerque, Stoddards and Metropole.

He eventually left the restaurant grind to run his own catering business. In the process, he made a name for himself in the Bay Area entertainment world and soon, road managers began soliciting his services to cook backstage meals for high-profile touring bands. Clients included not only the Grateful Dead but George Clinton, KVHW, Steve Kimock Band and Galactic.

Ayers joined Google in late 1999 when the company decided to formalize its employee meal benefit by bringing the production in-house (previously, it had simply ordered take-out, but as Google prospered and added staff, from only a couple dozen to over 300 today, that approach rapidly became impractical). To land the job, he had to defeat 10 other chefs in a "cook-off " where the winner was determined by Google employees taste-testing the competing chefs' creations.

He generally works 7:30 to 7:30, assisted by a staff of seven, including Sous Chef James Glass. Just about everything is made fresh daily, although most meats and seafood are marinated for a day or more in advance.

Ayers plans and prepares complete and separate lunch and dinner menus every weekday. Breakfast is expected to be added at some point as well, but for now, early bird and late-night-owl techies who get the munchies must content themselves with the "grazing bins" located in the micro-kitchens scattered across the corporate campus.

In addition, biodegradeable take-home boxes are provided for those who want to save their lunches or dinners for later or even take them home.

"We don't discourage people from taking food home to their significant others and spouses," Ayers explains, "and we encourage them to bring their families in to eat."

Cuisine calibrations
The lunch and dinner menus generally offer a half dozen salad choices and a couple of soup and entree choices at each meal, but ultimately, it's up to whatever Charlie feels like making with what's available. There is no cycle or any set menu and the exotic, the traditional and the just-made-up often follow each other in a jumble of tempting meal choices. It's Grateful Dead style improvisation transposed to the corporate kitchen.

"Many of the recipes are things I've developed over the years,"Ayers explains. "Others are tried-and-true classics that you'd find at any fine dining restaurant in the country."

He says New England clam chowder, traditional French onion soup and Chateaubriand are customer favorites. "The Capri salad is another one," he adds. "We could do the fresh mozzarella, tomato, basil and balsamic vinegar combination every day and they'd eat it up like they'd never seen it before."

Inevitably, Ayers's experimentation nudges up against the boundaries of his customers' comfort zones. In the past, forays into dishes like bison tenderloin, elk chops and emu breast met with...ahem, muted enthusiasm. Yet, Ayers is undeterred.

"I need to push some boundaries just to keep myself interested and not doing the same old thing," he explains. He also seems to harbor an evangelistic streak. "I tell them, ‘Look, you're getting to try—for free—new things you wouldn't normally go out and buy, so why not give it a chance?'"

Of course, he knows his limits. "Things that could be pets or cartoon characters are probably not advisable," he laughs.

Ayers says his favorite dish to cook is seafood, "because it's one of the most versatile foods you could work with. It's a clean piece of canvas that takes on so many different flavors and you can still complement them with the natural flavor of the product."

And what if someone asks for a simple burger and fries? "Oh yeah, I get that request quite often," Ayers admits, "but it's not what I was hired for."

All the talk of different meats aside, salads are a menu mainstay at Google because of the diverse employee base. "It's almost like working at the U.N," Ayers says. "You have people from every part of the planet here and you really have to be very diversified with the food you give them. The marinated cold salads are a great way to do that because you can add Indonesian influences, or Indian or South American or even just typical American. We also have a lot of vegetarians here so it makes it exciting for them not to just have a green salad every day."

Ayers estimates that 30 to 40 percent of the meals served on a typical day are vegetarian, though some of those are simply for people choosing to go meatless for only that meal because of the high-quality options available.

Buy from the little guy
Ayers has complete discretion in procurement decisions and he uses that to patronize local suppliers as much as possible (mega-distributor Sysco Corp. is utilized for chemicals only). The freedom to buy at his own discretion also lets him promote his own food philosophy of utilizing organic and chemical-, antibiotic- and hormone-free ingredients as much as possible.

"I have about 13 purveyors I use," he says. "I like to use all small mom-and-pop businesses in the area."

And what about the higher cost of such specialty products?

"Not a problem," Ayers claims. "The founders of this company encourage me to provide food like that."

It all seems somewhat unreal and idealistic from an outsider's perspective, but Ayers—who hardly seems to be a naif— insists it's genuine. And he also seems more than tickled to be a part of it.

"Everything that we do here, we do because we care about the people that we work with," he says. "And if people know that they're going to be taken care of, they'll be more excited and enthusiastic about coming to work. We're trying to set the pace for company involvement in their well being."