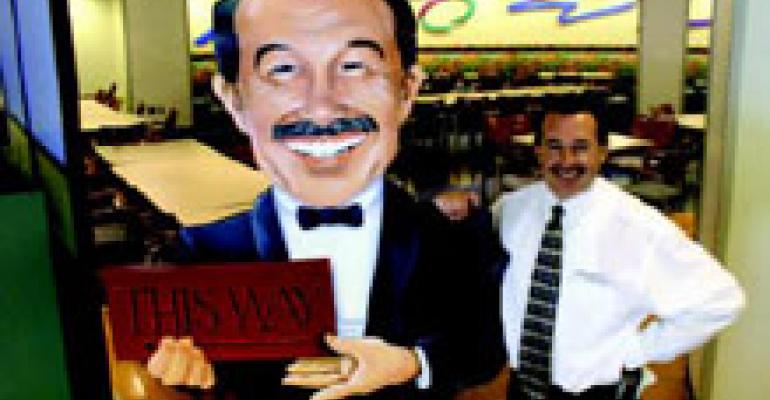 You know a nutrition services department is doing something right when it is highlighted in the hospital's annual report for two years in a row.

RWJUH has only emerged as a major academic medical center since the 1980s, but its roots as a community hospital in the region go back more than 100 years. In particular, though, it has been growing and building continuously since the 1990s. In contrast to most acute care facilities, its bed count has grown-from 415 to 567 beds—with another 32 beds slated to open next year in two new floors under construction at its attached Bristol-Myers Squibb Children's Hospital. And, like healthcare facilities everywhere, it has watched as outpatient services expanded at an exponential rate in the same period.

An emphasis on the dining experience
As you'd expect, that growth has translated into significant additional foodservice demand—and change—for Almeida's department. Today it delivers patient meals to 46 different locations on the seven-building campus, ranging from a typical floor with 32 patients to a critical care unit that holds ten.

All those points of service make for a demanding patient meal program, one that has evolved with available technologies since the early 1990s.

“We've always been on the cutting edge,” says Almeida, the hospital's director of food and nutrition/environmental/host services. “Our administration has consistently made the patient and employee dining experience, and customer satisfaction, top priorities here.”

That has meant a lot of change and evolution of the patient feeding program. Almeida's department has had food productionand menu management software in place for over 15 years. “We shifted from a select to non-select menu in the early 90s,” he says, “After that, we were one of the first hospitals to offer a spoken menu, using hand-held digital assistants to place the orders.”

Most recently, that drive to implement technology solutions to produce quality results led RWJUH to introduce a room service program that is among the largest and most sophisticated in the country (see sidebar on page 38).

“I don't want to seem immodest, but our philosophy is to find ways to make things work and work cost-effectively,” says RWJUH Senior Vice President of Operations Stephen Jones. “Simply put, we do not like to fail. When Harvey Holzberg, our president and CEO, said ‘Let's do room service!' we set out to do it and do it well.”

“If you look at our Press Ganey peer group scores for patient satisfaction with meal quality, we are in the 98th percentile,” adds Herman Lindenbaum, vice president of support services. “That's a great indication of the impact that move has had on how our patients perceive our service.”

Escaping from the 1950s
Almeida, a natural-born “foodie,” started out as an assistant cafeteria director at RWJUH in 1988, when ServiceMaster still operated the hospital's foodservice program. After the administration decided to go self-op in 1989, he was a key player in the transition period, assuming the role of foodservice director in 1992 and taking on housekeeping responsibilities two years later.

For hospital employees, the group's expertise is demonstrated daily in the operation of the new new dining room, which represents a dramatic departure from the former facility.

“Woody's Diner,” as the old cafè was known, was a 1950's themed room that did about $2 million in annual sales. Like the cafeterias of many hospitals, it had been located in the basement of the main building. “It had a solid menu and good customer service,-but was an aging facility, built in 1958, with artificial lighting that left a lot to be desired,” says Almeida.

Plans for the new facility began to take shape about four years ago when the RWJUH administration was undertaking two major expansion projects, one for its Cancer Hospital of New Jersey and the other for its Bristol-Myers-Squibb Children's Hospital.

“We looked at the increased employee and patient populations that were in the future and realized our existing facilities simply could not meet the added demand,” Almeida recalls.

“As a result, we were able to get funding for an expansion of our main kitchen production facility and approval to locate a new cafè in the Cancer Hospital that was then in the planning stages.”

The result was the simply-named Dining Room, bright, spacious and inviting, which now seats 325. Its table options range from several types of table “ neighborhoods” to a long, highboy stooled counter from which individual diners can look out through the cafÈ window wall to the grounds extending from the hospital's main entrance.

Natural lighting complements much of the floor space, while contemporary hanginglights provide visual accents and trafficdrawing cues to customers moving among the scatter stations and self-serve display coolers and merchandising racks. Customers move through the servery quickly and at peak periods up to five cashier stations can process purchases, although that number is seldom needed right now.

Attractive, custom-designed menu boards highlight each station and display pricing for core offerings, while rotating daily and weekly specials are merchandised to emphasize meal variety and featured themes. A greatly expanded salad and food bar is centrally located in the servery and was custom designed so that both 12-foot sides can be restocked easily from a central service aisle.

Limited finishing kitchen capabilities are housed in a narrow corridor behind the main scatter station wall, and serve primarily to meet holding and storage requirements of the stations out front.

“We wanted to create a ‘corporate dining' look, like you'd find in a well-designed B&I facility” says Almeida.

That goal was clearly met. The Dining Room was an immediate success, with a 25 percent sales increase logged in the first months of operation.

“The improved ambience was important for our employees,” says Jones. “Staff retention is critical to us and we believe hospital foodservices contribute to that goal. It's one of the reasons we re-open our cafÈ to provide hot meals to those on the third shift.”

Since then, participation and sales have continued to climb, and Almeida reports that cash sales are on track to hit $3.2 million this year, a 50 percent increase from 2002. In addition, Almeida's catering operation generates an additional $850,000, much of it from high-end special events that are hosted in the hospital's interior courtyard.

Service with a bar code and a smile
RWJUH's room service program had a somewhat more ad hoc origin, and was initiated while the old central kitchen was still in its renovation stages. The original plans were largely to expand its capacity and modernize its equipment capabilities, but to still support the hospital's cook-to-serve, traditional tray line production model.

Those plans changed when the hospital CEO happened to tour a smaller hospital in the region that had recently transitioned to the room service model for patient feeding. “He was very interested in the patient satisfaction scores they'd achieved as a result, and he wanted us to study whether that model would work here,” says Almeida.

Although RWJUH's size and decentralized points of service promised to complicate such an approach, its demonstrated ability to improve customer satisfaction helped Almeida and his administration overcome any reservations. They quickly moved forward to re-engineer the kitchen design so it could accomodate restaurant style production.

Among other required changes, the department had to review and modify many of the kitchen's original equipment specs: purchasing a single-serve pasta cooker, a Turbo Chef oven, a high speed broiler and other items to help it more efficiently produce individual meals.

“We also investigated several different room service management system options, including the one the CEO had observed,” says Almeida. “That facility is operated by Sodexho and serves a much smaller population than we do, but it had a very sophisticated software package that the company had developed to manage food production and delivery (see sidebar).

To make a long story short, Operations Vice President Jones contacted Sodexho to inquire about making that software available for RWJUH's use.

“We made it clear we were not interested in outsourcing our foodservice,” Jones says. “We believe in self-operation and have the management in place to do it. But we were interested in the room service software they had developed. While Sodexho does not offer it for sale, the company was willing to negotiate a licensing agreement with us.”

“It took six months to negotiate the contract, and we had only 16 weeks to get the production up and running,” Almeida recalls.

“We dedicated two assistant directors just to the task of inputting the menu and nutritional information we needed for six nonstop-weeks. When we introduced the program, we ran it in pilot mode for two days for only four floors, and then shifted all of our meal production to the new system last October.”

What has been the hospital's operating experience with the system since then?

“It's exceeded everyone's expectations,” says Almeida. “Patients love it because it gives them control and they order what they want, when they want it.

On the other hand, Almeida (who has long participated in benchmarking programs sponsored by HFM, the National Society for Healthcare Food Service Management) believes it is important to be realiztic about the costs associated with a room service program implemented in a large operation, such as his own.

“Some operators will tell you room service can be operated for the same cost as a traditional system, but that hasn't been our experience, and I don't think it's a realistic expectation for many operators,” he says.

“There are some significant savings in terms of plate waste and late tray production, but room service is clearly more labor intensive than mass production.

“But in our view, the ten percent or so cost premium has to be evaluated with respect to the definite increase in patient satisfaction and meal quality. Our administration felt that the benefits in that regard far outweighed the modest increase in production costs.”