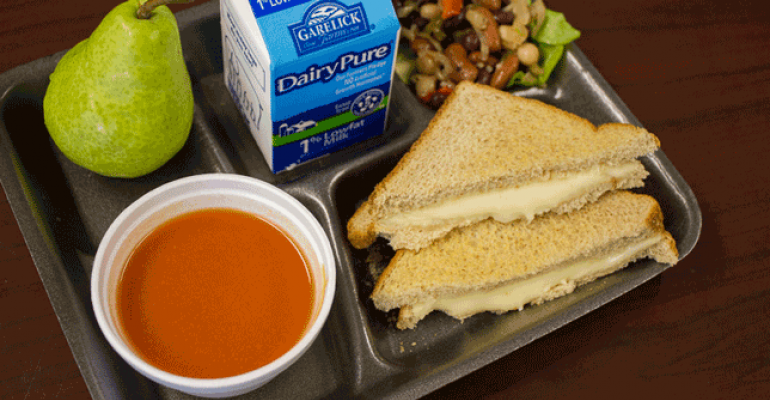 The website Niche.com runs an annual survey to determine the school districts with the best food. Topping the list in 2016? Cambridge Public Schools in Massachusetts.

No doubt one reason is a strong local sourcing program, including meats from a butcher located literally across the street from district headquarters, while an alliance with the local CitySprouts urban garden organization has helped produce a robust farm-to-school and city garden program where kids learn about how food is grown.

The dining team also actively engages with students to hone its offerings, hosting competitions among school cooking clubs to extensive taste testing and interacting with families from the highly diverse community to get recipe ideas.

“We have quite a variety of cultures that come together in the schools, and we want to make sure the meals we offer reflect [that diversity],” explains Nutrition Services Director Melissa Honeywood.

To help do that, her department has been partnering with the local community engagement team to learn what the different ethnic groups would like to see on school menus and to solicit recipes.

“Not all of [recipe ideas] were compliant but we got a good variety, so we had the luxury of being able to find some that would work, that could be scaled, that would fit the nutrition guidelines and that we could modify in a way that kept them authentic,” Honeywood says.

The recipes chosen are first taste tested at a handful of schools to gauge interest.

“We don’t like to spring something new on students without trying it first because when it comes to choosing between something familiar like a peanut butter and jelly sandwich and a food they might like but they’re not a hundred percent sure of, they will opt for something that may not be as enjoyable, but they know that they like rather than take the risk on something else,” Honeywood explains.

“So we do a taste testing where in addition to the regular meal we have volunteers come in and actually serve small samples of the [potential new item] and ask them for their feedback to see if there’s anything we’ll need to modify.”

The introduction of authentic ethnic items in the cafeteria is also a social enhancer because students familiar with the dish will engage with peers and talk about how their families prepare it.

“So it really gives them an opportunity to be really engaged in a way that they don’t necessarily encounter most other days,” Honeywood offers.

After the initial taste test the item is generally then offered as an additional option on the lunch menu a few weeks later at the sites where it was tested.

“That way, we’re able to track sales and see how they really do like it, if they just liked it as a sample or if they would actually select it were it an actual option,” Honeywood explains. If the item passes muster it is gradually introduced at the other district cafeterias as well.

Among the success stories was the chicken biryani, which Honeywood says was a big hit with all age groups. It also used chicken thigh meat the district sources from a butcher located literally across the street from district headquarters, which “really created a great opportunity to go full circle and have local flavor reflected in a local product,” Honeywood stresses.

“We do a lot of local food sourcing year-round,” she says. “In addition to participating in the Massachusetts Farm-to-School Harvest of the Month program, which features a different Massachusetts product each month, we [also] highlight local vendors every month. We have it printed on our menu so that way we really have it out there as the kids are making their food choices at home even before they even get to school.”

The meals and vendors are also promoted with direct student engagement. For example, nutrition services worked with a group of middle school cooking clubs to develop a sauce to top a locally sourced redfish dish.

“We had them test the product and try to figure what flavors would go well with it. Then we seeded a sauce competition between the grades, where they got to pick a finalist from each grade and then those competed against each other and had a schoolwide ‘sauce off.’”

The winners got to market and brand their sauce, which was then served in all the district schools.

“It went over really well even at the schools that didn’t have a culinary program, and even some of our staff were impressed with the flavor of the sauce and how it came out,” Honeywood says. She also notes that the success of the redfish dish countered the belief that “kids will only eat fish if it’s in the form of a fish stick or pressed into a funky star or dinosaur shape or something like that. We got zero kickback from any of the students during this whole process.”

Meanwhile the participating culinary students got some valuable lessons about school foodservice and the regulations it must follow.

“That’s something we were upfront about,” Honeywood says, “which was great because it was an opportunity for me to say, ‘OK, guys, not only are you having to be like culinary engineers and chefs, but you have to be school chefs, and some of the things that we have to do is watch the nutrition information on what we create.”

Nutrition Services also partners with CitySprouts, a local nonprofit organization that teaches gardening skills to students and which has facilitated the introduction of gardens in all Cambridge elementary schools.

While the CitySpouts gardens can’t nearly meet the volume needs of the district nutrition program, they do contribute an occasional tangible lesson in the garden-to-kitchen connection, such as supplying some of the basil for a popular tomato basil soup.

Cambridge operates 13 school kitchens for 17 schools, several of which are dual sites served by one kitchen. The menu at the elementary school sites is a combination of scratch production and some processed product such as precooked, diced chicken. However, almost everything is scratch-made at the high school, where participation is low not because the food is unattractive but because the facilities and time windows are inadequate for the size of the potential customer base.

“The biggest problem we have at the high school is getting enough kids through the line, because the school has roughly 1,600 students but only two lunch periods, and we’re just not physically capable of serving 800 students in 30 minutes,” Honeywood explains.

She estimates that less than 600 students can feasibly be accommodated over the schedule’s current two lunch periods, resulting in participation rates in the 27- to 33-percent range. The open campus also encourages students to look at other lunch options.

The service problem persists despite the presence of two separate cafeterias in the vast building. They are similar in many respects—each has a salad bar, soup station, deli line, pasta station and entrée station—but the difference is that the smaller one is geared to serving the school’s extensive population of vegetarians.

“We dedicate an entire line [in the smaller of the two cafeterias] to be the vegetarian station, so that way vegetarian students don’t have to try to pick through all the different stations to make a complete vegetarian meal,” Honeywood explains. “We have it all set so they don’t have to go criss-crossing over the dining areas to find something.”

Breakfast is served at all Cambridge Schools sites but only one has a breakfast in the classroom program, and it is this site that also developed a special smoothie program to address a particular service challenge.

That challenge occurs each Monday morning when the site holds a community meeting that prevents students from going to their classrooms, where they usually get breakfast. It required a meal solution that could be gotten quickly and efficiently and that could be consumed easily while sitting on the gym floor during the meeting.

The smoothies the department developed to solve this problem incorporate the three components necessary for a reimbursable breakfast, and they are backed with sufficient auxiliary components at the serving station to meet offer-versus-serve requirements.