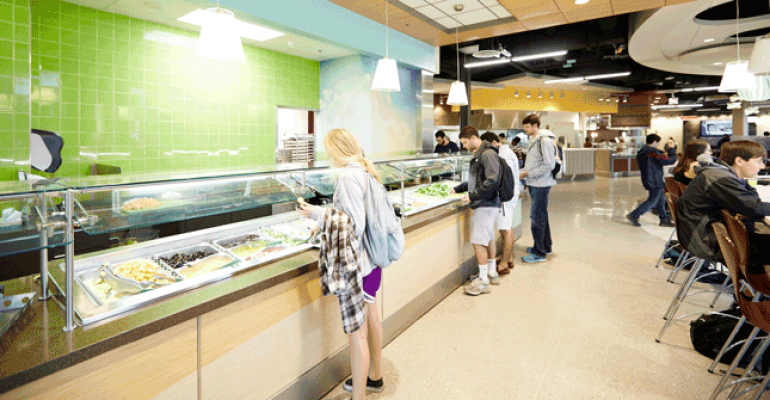 <p>The Fresh Food Company residential dining center is now in its own 25,000-square-foot facility, away from the retail dining food court with which it shared space until a few years ago.</p>
Operations

Until a couple of years ago, the main residential and retail dining outlets at the University of Alabama in Tuscaloosa were shoehorned into a nondescript and inadequate space in the same building. That changed in 2014 when the brand-new Fresh Food Company residential dining center opened in a completely separate facility, allowing the retail operation to take over the space residential dining left in the original building.

The two construction projects not only almost tripled the total space used by the two operations but also allowed significant upgrades to the quality of the food served. Since then, the university has added several more outlets to the campus dining mix, including what it says it the first drive-through Starbucks outlet on a college campus.

The separation of the main residential and retail dining complexes solved a number of issues, says Kristina Patridge, director of university dining services, and in a way capped a transformation of campus dining at Alabama that saw the number of locations grow from 12 in 2005 to 26 a decade later. Annual meal plan sales almost quadrupled over that same period, from 2,600 to 9,800.

“The residential [dining hall] was in the Student Union Building [and] was sort of tucked behind the food court,” she says. “The food court was really dark and really not laid out well. During peak times it was overcrowded in both locations.”

The move not only allowed UA Dining, which is managed by Aramark, to double seating but gave the residential operation the ability to cook much of its food in front of the customers. Fresh Food Company boasts eight food stations ranging from deli, grill and pizza to vegetarian, entrees and desserts.

Meanwhile, the extra space allowed for a food court expansion in the retail operation.

“In the old food court we did a whole bunch of different things and probably not really well,” Patridge says, “so what we decided to do when we expanded was [to tear] down the wall between the two units and just put in a few really good key anchor brands.”

These included Panda Express and Wendy’s along with expanded Chick-fil-A and Subway stations. Also new is a Union Market c-store selling snacks, beverages and grab-and-go foods.

That food court renovation did pose a problem in that even though it was scheduled to take place over a summer, “it was the bulk of our retail on campus for [summer events like] orientation and camps and so forth,” Patridge explains. To compensate, the department opened its planned Raising Cane’s outlet in Paty Hall, located near the Student Union, just before the food court closed for construction.

Today, the concept remains highly popular with students and also provides an attractive late-night dining option as it stays open until 2 a.m.

This year, the additions to the campus dining mix include a new Starbucks outlet connected to one of the campus bookstores across from the football stadium that is distinguished by a drive-through, the first such on a college campus, Patridge says. It joins an existing Starbucks unit in the Student Union but was already exceeding sales from that location before school even started, generating $6,000 on the Friday of move-in week.

“It’s a great location for the Tuscaloosa community and also for the residence halls that are on that side of campus,” Patridge notes. “There’s also a large population of student housing not affiliated with the university directly behind it so it gets a lot of pedestrian traffic” in addition to the mobile customers taking advantage of the drive-through.

In addition to the new Starbucks, Alabama revamped its campus c-stores, exchanging a Pizza Hut unit for an house brand that offers deli, pizza and wings selections. It has more menu flexibility than the commercial brand it replaced, Patridge notes, and gives customers customization options in the deli component and a by-the-slice option for the pizza, something student surveys indicated was a preference and something Pizza Hut did not offer.

“We try to listen to what the customers say,” Patridge says.

Something else they said and the university followed through on was a change in the meal plan to add a retail option. “So we created a VIP add-on that is basically a block of 25 retail meals,” Patridge says. “It’s been very popular.”

Viewpoint: Food Delivery at the Airport—From Convenience to Expected
Sep 21, 2021