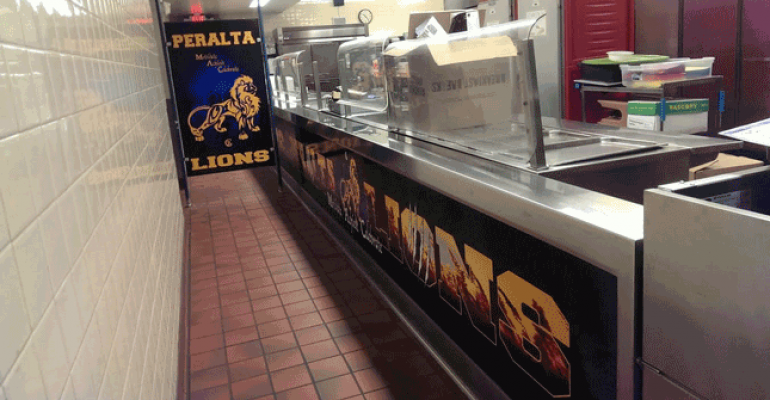 With a 95 percent free/reduced ratio, Cartwright Elementary School District 83 is one of the most poverty-stricken districts in the country, but that doesn’t mean its school meal program has to lag. In fact, Cartwright is one of the country’s most celebrated, with 18 of its 20 sites receiving Gold Awards in the HealthierUS School Challenge. The other two, both middle schools, won Silvers.

Cartwright’s foodservice director, Diane Gruman, attributes some of the district’s success in the Challenge to simple demographics: High-poverty districts tend to get high participation because of the subsidized meals, and participation is a key metric in the HealthierUS competition.

At Cartwright, it ranges from 85 to 95 percent or more depending on the site.

But high free and reduced numbers are just a start. Even free meals have to be attractive to draw diners, and that’s one area where Cartwright’s meal program excels.

“We don’t do a lot of scratch cooking [though] we do try to do one a week, usually a kettle product like spaghetti, mac ‘n cheese, chili or something like that,” Gruman says.

The difficulty is the “tiny, tiny” size of the kitchens at the schools combined with the large numbers of students—the average Cartwright site has about a thousand kids and, as noted above, most of them participate in the meal program regularly. The district is also growing again after a brief downturn half a dozen years ago.

“We closed a school at that time but have since reopened it,” Gruman says.

Cartwright students generally get three entrée choices a day, with a fruit and vegetable bar, while breakfast in the classroom is served at 17 of the 20 sites and supper at three.

The program is on a four-week cycle, “but if we see something really isn’t working or the kids really don’t like it, we’ll keep our eyes open for something else,” Gruman says. “We realize kids can burn out on things and they need some new choices.”

The district’s demographics are heavily Hispanic—Cartwright sits just west of Phoenix—which influences the menu to a certain extent.

“Some of our biggest days are ones with a Latin flair like nachos or tacos, but we also do a lot of chicken nuggets, hot dogs, burgers and things like that,” Gruman says.

She maintains what she prefers to call “fruit and vegetable bars” rather than salad bars, “and every day we try to put out some fresh fruit as well as some canned fruit and vegetables and kids can help themselves to it. They take what they want.”

The choices sometimes include more exotic items. Eight Cartwright sites participate in the USDA Fresh Fruit & Vegetable Program, “and with that we’ve done things like dragon fruit, pomegranate, several types of melons and apples, star fruit and jicama. The kids love the jicama, it’s a cultural thing, as well as mango,” Gruman says.

There are fresh vegetables on the bars and cooked veggies like corn, peas and green beans with the meals.

Some of the produce is local though Arizona isn’t noted for its agricultural bounty, though Yuma, not far from Cartwright, is known as the “winter lettuce capital of the world,” and the state also generates a number of other crops like apples and even watermelon that the district can access in season.

Some schools have gardens and can represent an education tool about where food comes from, but Gruman says the minimal volumes they produce rarely do more than set an example.

A robust catering program helps supplement nutrition department finances and Gruman is rolling out a new catering book this year, something she tries to do every other year. This year’s edition focuses more on boxed lunches.

“We’ve always had a build-your-own lunch platter, but we’ve found people would take all the ham and there’d just be turkey left, so now we’re looking at more of a boxed lunch,” she says. “It’s faster, cleaner and we don’t have to worry so much about what kind of portions people are taking.”

The catering revenue helps keep Gruman’s books solidly balanced, as do the high participation rates that deliver a steady income stream of federal funding. That has allowed the program to build enough of a surplus to afford installing digital menu boards at all sites this fall. She will also invest in upgrading some of the food she purchases, such as going to a 100 percent beef burger.

“We’re actually going to be spending more money on food this year,” she says.

Monroe Community Schools goes to all pre-order with some assembly required for remote meals
Jun 01, 2021