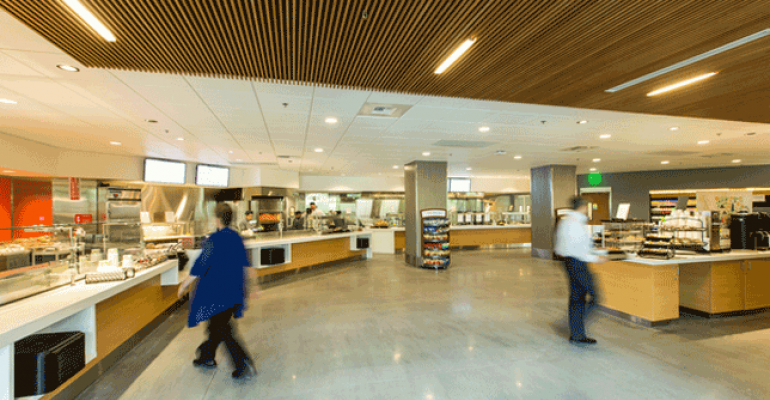 EvergreenHealth’s 318-licensed-bed main facility in Kirkland, Wash., operates a foodservice department that is advanced in meeting sustainability objectives, efficient at turning out meals without undue waste and adept at creating dishes that drive both retail traffic and patient satisfaction.

Managed by the Thomas Cuisine foodservice contract firm, EvergreenHealth’s dining operation centers around a two-year-old facility called Café 128, which operates seven days a week for 18 hours at a stretch (from 6:30 a.m. to 12:30 a.m., though not all stations remain open in the later hours).

Café 128 consists of a retail dining servery with six branded food concepts and a kitchen that prepares patient meals that are based on the retail menu mix. The close alignment of the retail and patient dining menus allows the kitchen to operate efficiently by reducing procurement complexity, streamlining operational procedures and allowing cross-utilization of meal components.

“Most of the ingredients that are used in the front of the house are used for the patients as well,” explains Andrew Amoroso, district manager for Thomas Cuisine. “The menus are a little different because we have to abide by the nutritionals, and the portions have to be significantly different, but a lot of the ingredients are the same, so, for example, patients are getting the same salmon the retail customers are getting, but it just might be prepared a different way and in a different portion.”

Café 128 is a retail diner’s dream, with five of the six stations offering at least six—and up to 10—different menu choices daily, while the sixth, an entrée station, has a special of the day. The five stations with multiple choices have mostly set menus with made-to-order options, which helps streamline operational and procurement efficiencies and also helps reduce waste.

“By having a set menu, we’re very good with our production numbers,” explains Amoroso. “We’re able to use extra product the next day in our operations, so we can adjust our pars.

“Our waste is under 1 percent now while most organizations like us are around the 4 to 6 percent mark,” he claims. “We track all of our waste and weigh it as part of our composting program.”

Generating minimal waste is one way the foodservice operation has contributed to Evergreen’s garnering a series of environmental awards, including six straight Practice Greenhealth Environmental Excellence Awards from Greenpeace. Another is the use of sustainable products.

“Our goal is to have at least 25 percent of our ingredients locally sourced,” Amoroso adds. “We’re part of the Premier [cooperative purchasing] contract and so we’ve had to go off contract to be able to do that, to work with local vendors. We now have a lot of local vendors we’re using.”

Also contributing to the sustainability score of the dining operation is the use of compostable disposables, the proper sorting of waste and the collection of oils for recycling.

Products are also procured unprocessed for the most part.

“Everything is made from scratch, we don’t do anything out of the can or premade,” Amoroso emphasizes. “There are no fryers, and we’re really big on healthy options.”

Central to that latter goal is Thomas Cuisine’s Real Foods Program, which ensures there are plenty of healthy options on the menus.

“It’s our version of a red light/green light program, [where green selections have] 750 calories or less and are made of all whole foods, from scratch,” Amoroso explains. “There are also guidelines around saturated fat, sodium and so on.”

The stations in Café 128 include Field of Greens (handmade, made-to-order tossed salads), Sliced (a deli offering both menued and customized options), Hearth (pasta dishes and wood-fired pizza all made to order), Grillery (burgers and other grilled items), Flavor and Fire (an Asian wok exhibition station) and Market Fresh (featuring an entrée of the day).

The concepts were all developed by Thomas Cuisine and are also used in other sites where the company operates, though the menus are customized to fit each location’s preferences.

“You’re not going to see the same recipe in every location,” Amoroso offers. “They are developed specifically for the location you’re at.” That being said, each concept does have to abide by certain standards. For example, a quarter of the ingredients in a Field of Greens station must be organic or locally sourced.

Café 128 is open 6:30 a.m. to 12:30 a.m. every day, though the stations start shutting down one by one starting in mid-afternoon. “We phase them out until we leave just one open [usually the grill] until closing time,” Amoroso says. “We also have a really robust grab-and-go program that keeps the guests pretty happy.”

On the patient dining side, the food orders are taken by unit hosts before each meal period and then served by them at a time of the patient’s choosing.

“We see each patient in the hospital face-to-face at each meal,” Amoroso boasts. “We go to their room in person and take their order. They can choose from a select menu.”

As an extra service, he adds, if a patient’s stay extends past a week, the kitchen opens up the menu at one of the Café 128 stations each extra week they’re in the hospital to give them more meal options.

The unit hosts work 12-hour shifts so “they are on the same schedule as nursing and they get to take care of the same patients for all their meals,” Amoroso explains. “They can get on a personal level [with the patients] and make a connection with them.”

Patients also get to choose the time each meal is delivered.

“We offer them two different times that they are able to choose from and 95 percent of the time the patient will choose one of those times,” Amoroso explains. For the few that don’t, “we’ll accommodate them to the time they want it to come up. We try to be as efficient as possible by getting the trays all up there at the same time, but we work with patients too and make sure they understand that they have options.”

The patient menus are designed to be flexible, “so whatever we put on them, we try to make sure it fits across all diets or it can be texturally altered, which is something most hospitals don’t do,” Amoroso says. “For dysphagia patients, for instance, a lot of hospitals are limited to prepackaged or predeveloped items, whereas we will texture it all and do it all for them in house.”

And, he adds, “everything on the patient menu is just like out front: we use all whole foods and from-scratch items,” which, he says, gives the kitchen more flexibility with flavoring because it isn’t dealing with processed products already filled with troublesome substances like sodium.

And because those same whole foods are used in both retail and patient dining, the kitchen can be more efficient in production, labor usage and waste reduction.

The unit host-based patient dining system was rolled out six months after Café 128 debuted, and both sides of the dining operation have benefitted since.

“Since we’ve opened the café, we’ve more than doubled our revenues in the location,” Amoroso says. Meanwhile, “our patient satisfaction has gone up significantly. The whole unit host program, taking orders face-to-face before each meal and then delivering it, put us at one point in the 99th percentile for courtesy of the person serving in our region, and we’re one of the highest scoring in that category in the nation.”

The success in the retail end has come from a number of areas, including repetitive business, which Thomas Cuisine tracks.

“We had customers who might have eaten one or two times a week with us before, but now it’s three or four times a week,” Amoroso says. “The space is also drawing people from outside” who use Café 128 as a destination restaurant, he adds. It’s the quality that attracts them, he says.

“A lot of it because the food is made to order, and has not been sitting there,” he explains. “One thing that’s really big in the Seattle area is knowing where your food came from, and so were really focused on that.”