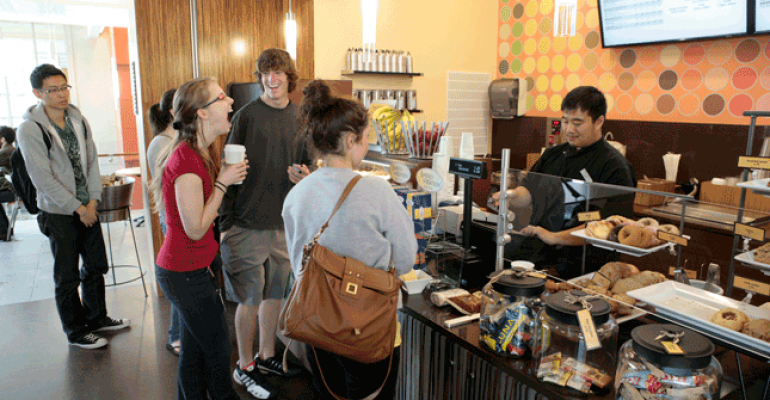 <p>Byte is one of the school&#39;s retail dining outlets, this one in the&nbsp;new&nbsp;Lemieux&nbsp;Library.</p>
Operations

They’ve always eaten well at the University of Seattle, but they may eat even better starting this fall as the school recently engaged celebrated culinarian Christine Keff (Flying Fish) as the dining department’s new executive chef. Keff will assist the Bon Appètit-managed dining team with a campus meal program that already delivers gourmet quality fare at six locations, most prominently the multistation Cherry Street Market.

Keff “is an icon of Northwest cuisine, one of the original torchbearers of fish-to-fork and local sustainable fishing,” says Jay Payne, Bon Appetit’s general manager at the school. “She sold her restaurant a few years ago and has been looking for a steadier gig than the consulting she has been doing. She has always admired Bon Appetit and wanted to get on board.”

One of the attractions, according to Payne, is the opportunity to make an impact.

University of Seattle with its enrollment of some 7,000 students represents just such an opportunity, he notes.

Sustainability is already an imperative as Bon Appetit’s corporate policy requires each of its operations to source at least 20 percent of its products from local sources, “and we're always over that,” Payne says.

He works with a local organization called FoodHub that consolidates the output of local farmers a “to simplify our farm-to-fork purchasing.”

Payne himself comes from the commercial restaurant world in which he operated his own farm-to-fork establishment before joining Bon Appetit eight years ago. He has been at the school for the past three years.

Keff’s impact on the menu is expected to be minimal initially as she was hired close to the start of the fall semester. But her influence should grow as the year progresses, Payne says.

The program Keff has joined is already operating at a high level. The cornerstone of the dining program is Cherry Street Market in the Student Center, an a la carte dining court in which “we’ve crammed as many stations as we could possibly fit,” Payne laughs.

The menu changes from lunch to dinner to provide even more variety than the sheer number of outlets already present. “The big comment we get is that students want variety, so we work really hard to keep that variety up and keep the students interested,” Payne says.

Cherry Street Market is the busiest dining venue on campus, but it is supplemented by five other locations. Just upstairs in the same complex is Hawks Nest Bistro, which features spectacular views of Mount Rainier and specializes in pizza from a wood stone oven as well as burritos, tacos and taco salads.

Hawks Nest also serves as a bakery café with a premium coffee program and an extensive array of sweets from the campus bakery, plus numerous grab-and-go choices.

Hawks Nest is open until midnight and tends to get crowded once the Cherry Street Market shuts down several hours earlier, Payne says. It’s especially popular with the campus athletic community, “because they tend to eat at off times,” he notes.

Elsewhere on campus are the Bottom Line, which boasts a popular teriyaki chicken dish according to Payne; The Byte in the new Lemieux library; The Cave, which functions as the campus c-store and menus a popular Hawaiian pulled pork dish; and The Sidebar in the Sullivan Law Center. One distinctive feature of all these eateries is that each offers a different coffee program to give students a variety of options, a cultural imperative in the Northwest.

All the venues stay “packed,” Payne observes. “We’re sort of over capacity as the university has grown quite a bit since all these facilities were built.”

The demand for on-campus residences is high because of the high cost of housing in the Seattle area,” Payne adds, noting that the university is in the process of adding more on-campus rooms.

Currently, about 2,000 students are on meal plans, which are based on a declining balance approach. Freshmen and sophomores living on campus are required to purchase one. There are no all-you-care-to-eat facilities at SU so all food/beverage purchases are pay-as-you-go.