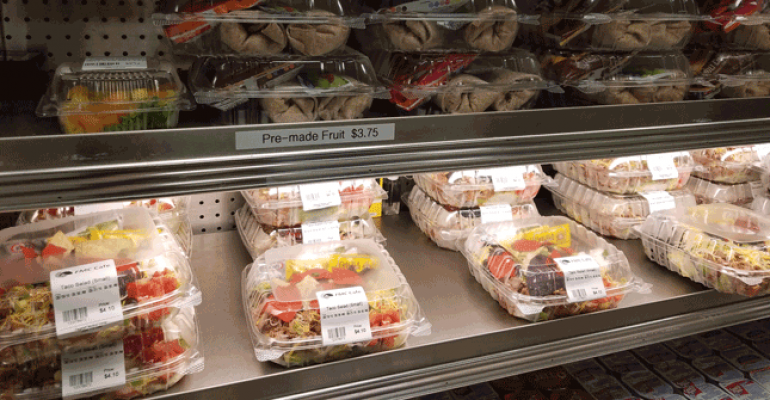 <p>Flagstaff is trying to offer more healthful items, such as these grab-and-go salads.</p>
Operations

Flagstaff Hospital has a fairly static onsite customer population and parking difficulties prevent a lot of walk-in traffic. Hence, the dining operation has to be creative and efficient to grow or even maintain retail dining counts.

One strategy it has employed is using benchmarking data from the Association for Healthcare Foodservice (AHF) Benchmarking Express program to identify areas where it might improve productivity. The strategy has been successful enough that the hospital’s nutrition services director, Jeanine Drake, won AHF’s Benchmarking Award of Excellence this past year.

“I’ve been using benchmarking since I became director here in 2004,” Drake says.” It lets you see areas that are benchmarked against other hospitals, where if your numbers are not in line, you can [target for] improvement.”

She cites AHF’s member listserv as an especially valuable tool for getting feedback and ideas.

AHF accolades aside, an even more tangible sign of Drake’s program’s success is that her department was the only unit at Flagstaff Hospital permitted to add staff this past year because of how she was able to produce data to justify the increases she sought.

“In every other hospital department they were cutting staff; I was the only one allowed to add because I could show we needed the staff based on numbers,” Drake says. “Our productivity was part of it and probably the main reason.”

One metric she believes is significant is paid hours per meal, which at 0.11 is on the low side even after adding staff.

“We’re efficient in how we keep the meal production up,” Drake offers. “Our hospital’s not growing that much, so it’s harder to kind of keep it up because a lot of our services have gone off campus and we don’t have as much of a crowd to come in and eat.”

One thing she didn’t do was raise prices—“and hopefully that doesn’t kill us,” she quips. “In the meantime we’re working on lowering our waste, doing process improvement projects and [trying to] anticipate demand better.

Parking issues hamper getting offsite walk-in traffic, which some hospitals use to bolster retail dining numbers. There are some walk-ins from nearby outpatient and dentist offices when the weather is good (at 7,000 feet above sea level, Flagstaff can get heavy snow).

“We’re always looking to become more efficient and want production to be spot on, but that’s not always reality so you have to be able to use your leftovers efficiently,” Drake says. “That means including your staff in the improvement process because they’re the ones out there really working and they’re the ones who know what is going on.” It makes sense: If the team gets involved in creating a process, they are more likely to buy into it, “and at the same time the hospital and our department benefit by saving money or making our service better for our customers and patients.”

Patient dining is offered on a modified room service basis in which nutrition assistants take meal orders at bedside using iPads: after breakfast for lunch orders and after lunch for dinner and the following day’s breakfast orders. They also deliver the food.

The 271-licensed bed hospital has a daily census in the 200 to 225 range, and the kitchen serves some 17,000 patient meals a month. Generally, the patient has a choice of two hot entrees and a cold tray run on a three-day cycle.

On the retail side, there is one main café. The only other onsite dining option is a coffee shop run by the local Late for the Train coffee company.

The café is open 6:30 a.m. to 7:30 p.m. and then reopens from midnight to 3 a.m. to accommodate overnight staff and late visitors. It operates on a three-week cycle supplemented by specials and completes 42,000 to 44,000 transactions a month. Stations include deli, grill and pizza.

Drake is trying to increase the number of healthy choices and specialty selections offered. She and a half dozen of her staff recently attended a two-day plant-based cooking class to learn how to serve vegan customers better.

“We’re now working on having a vegan item in the cafeteria every day and then on our patient menu as well,” Drake says. “Now we’ll have something to offer besides [just] tofu.”

Other health-based changes have included placing bottled water and other healthier beverages at eye level and moving chip racks to less visible locations.

“I like to provide a balance so that customers can make their own decisions,” Drake says. “I think you can eat healthy in our cafeteria and then find those other foods you can splurge on.”