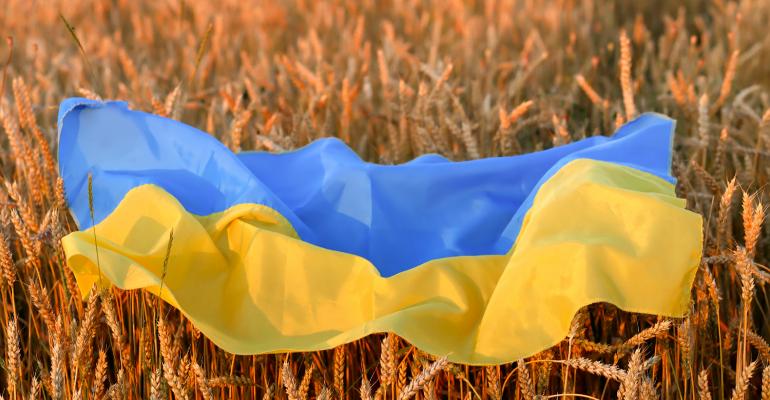 Anna Koberska / iStock / Getty Images Plus
The war in Ukraine has suddenly ended the flow from two of the world’s largest producers and exporters of wheat, corn, barley and other grains.
Operations

How to brace your kitchen for impact of Russia-Ukraine war

Are you prepared for the Russia-Ukraine war’s effect on your menu, from pizza and pasta to burgers and fries and chicken and eggs? Foodservice consultant Arlin Wasserman offers actionable steps for the economics and food purchasing realities in the here and now, including some solutions with fascinating sustainable potential in the long term, too.

For foodservice operators in the U.S., the Midwest is our breadbasket. Here grow the grains that make up the country’s most popular foods — like bread — as well as the grains that feed our animals, our breweries and serve as the basis for so much more. In Europe and Africa, Ukraine — with its flag depicting a field of wheat under a blue sky — along with parts of Russia serve as the breadbasket. When war strikes the world’s other “breadbasket,” every kitchen is affected.

The war in Ukraine has suddenly ended the flow from two of the world’s largest producers and exporters of wheat, corn, barley and other grains. Together, the two countries make up a quarter of the world’s wheat exports. For Russia, it comes as a result of economic sanctions for its unprovoked attack on another country. For Ukraine, its farmers are now picking up arms rather than plows and scythes.

In addition to disruptions to planting and harvest in Ukraine, the port of Odessa is both a key part of the food supply chain and is important militarily. Russian control of the port would allow for military equipment to enter Ukraine more easily. Should the fight for Odessa continue to intensify, damage to the port could further impact global grain supplies and markets.

The risk that the war will affect wheat supplies sent futures up between 50-70% for U.S. soft and hard red winter wheat before settling at about 40% above prices before the invasion. Russia understood the disruption Ukraine would cause to grain markets and made the move before the invasion to suspend exports of wheat even to ex-Soviet countries including Belarus. The 2021 harvest in the U.S. also was 28% below average, leaving fewer stores to tap.

Outside of Ukraine, the greatest pains may be felt in Africa which depends on the nation for much of its wheat. There’s no easy solution to the food shortages ahead, as the world’s farmers cannot plant more crops as fast as Russian tanks roll across Ukraine’s borders.

The main challenges we face in kitchens here in the U.S. are our food costs increasing and the shortages of some common food ingredients. [FT1] Wheat flour, corn and other grains like barley are in short supply globally. That means prices for what is available go up everywhere. Soon, those costs will show up in poultry, meat and dairy, as the cost of grains for animal feed also increases.

In addition to the livestock industry, which relies on grains for animal feed, the war is also impacting the aquaculture industry, which has relied on Russian and Ukrainian grains to produce feed for fish. Economic sanctions also have substantially reduced our access to cheap white fish products, as Russian boats fish in Alaskan waters and sell back low-cost cod and processed products (think fish fillets, fish sticks and surimi) at lower prices than U.S. companies.

In Europe, sunflower oil is a staple produced from Ukrainian fields, filling the role of canola oil in the U.S. in a market that does not readily accept genetically modified foods. With countries like Spain already experiencing shortages in edible oil and seeking alternatives, increased demand will likely drive the price for all edible oils higher, as well.

Longer term, Russia is the world’s fourth largest producer of fertilizers, using its natural gas reserves to produce about two-thirds as much as the U.S. That means higher prices for crops like corn used or animal feed.

All in all, that covers most of the menu from pizza and pasta to burgers and fries and chicken and eggs.

When we’ve experienced shortages in the past, they’ve been short lived. The solution was just to pay a few pennies more and outbid almost any other country for surplus food. Now, there’s no surplus. Instead, a global shortage of some very common ingredients could persist for the long term, as Ukraine’s recovery will be slow and the impacts of economic sanctions against Russia will take time to rebound.

But there are moves we can make now, and over the next few months, to avoid the worst. And every crisis is also an opportunity. This time, the opportunity is to implement some menu and sourcing changes on the wish list of many chefs and operators.

So, what are the smart moves?

Pay Now, Buy Later - The smartest move would be to have already purchased your food before prices went up. That’s because price increases only affect what you order now and in the future. Most of us didn’t have the foresight to preorder for the next couple years. But we can do the next best thing and lock in prices now. That’s a good move when inflation ramps up, which is something else most of us haven’t seen so severely in the last several decades of our professional lives.

Many food manufacturers pay farmers in advance for crops to be delivered in the future, making a partial payment before planting and the rest when delivery occurs. As foodservice operators, we can take a page from this playbook and start working directly with farmers to buy next year’s harvest at current or negotiated prices. That’s also a way to help your local farmers improve their businesses, buy their seeds and fertilizer in advance, and know how much of what crops to plant. You can ask your suppliers if they’re interested in doing the same thing and take your order now, with a modest up-front payment.

Buy American (Carbs) - In addition to locking in wheat prices from American farmers, we also grow potatoes, beets and other carb-laden crops that are turned into flours, starches and other products that can be used to reduce the amount of wheat used in a host of recipes. Potato bread and buns are an easy switch. Even using potato starch to make up five percent of a coating recipe can help blunt current price increases.

Feed Animals for Free - We’ve all been talking about how much we want to support regenerative agriculture, raise animals in more natural ways, and eat more pastured and grass-fed products. Here’s your chance. With manufactured animal feed increasing in price, pastured and grazed animals are eating for free. Start negotiating prices now for bigger orders.

Serve More Red Fish – Cheap whitefish products may be hard to come by if you or your suppliers were relying on Russian fish. Frozen salmon from the same Alaskan waters is a familiar and similarly priced replacement if you suddenly find you’re facing a shortage or the price for whitefish products heads higher.

Focus on Sustainable Agriculture - While wheat prices make the headlines, fertilizer prices will affect operations for the next several years. Organic farming, along with some other sustainable agriculture practices, avoid the use of synthetic fertilizers made from natural gas. With conventional farming costs climbing, the price difference for many sustainably grown foods should narrow in the near future. Again, place your orders now and start negotiating prices while talking to your suppliers about making sure their farmers aren’t relying on synthetic fertilizers. In doing so, you can speed the transition to more sustainable farming.

Support Economic Sanctions – There are several efforts underway to skirt economic sanctions aimed at ending the war against Ukraine. Russian fishing companies are trying to send their product to China and then have it shipped to the U.S. under their flag. Peace is in everyone’s interests. Don’t look for workarounds and make sure your suppliers also are doing their part to support an end to war .