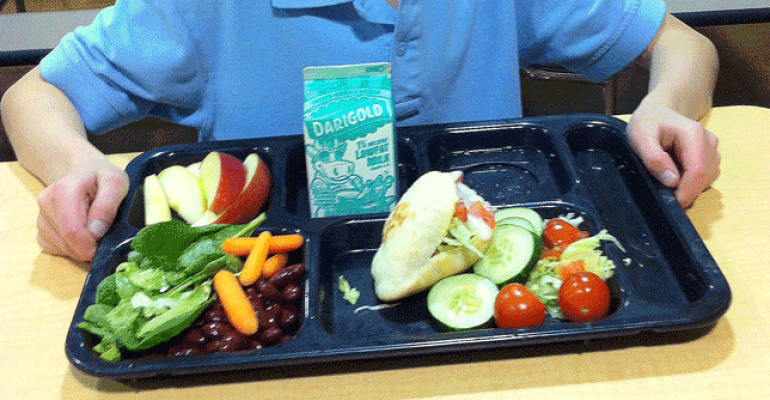 Black bean brownies, cinnamon rolls made with sweet potato, Brussels sprout salad and pozole soup are not the usual fare on K-12 menus, but they are among the items offered to eager young customers at Highline School District, located south of Seattle. Highline is diverse and has a fairly high 70 percent free/reduced percentage, so the meal program must satisfy a wide array of tastes and food preferences, including an unusually large number of vegetarians, with selections that comply with federal National School Lunch Program requirements.

Highline has been successful enough at generating participation and encouraging healthy habits among students that 14 of its sites earned citations in the HealthierUS School Challenge this past year, including six Gold Awards of Distinction.

District meals are prepared in production kitchens at four schools scattered around the 20,400-student, 39-school district.

“We do scratch cooking and experimented last year with a lot of scratch baking,” says Lisa Johnson, director of nutrition services. “We make excellent cornbread and cinnamon rolls from scratch to which we add sweet potatoes in the dough. Last year we tried a black bean brownie that went pretty well, though we’re still working on tweaking that recipe.”

Suggestions for meal options flow in to the district from both the community and from students. One big success story of late is a pozole soup that grew out of student input.

“We had a population asking for pozole soup, and we didn’t know anything about pozole soup,” Johnson recalls. “So we researched it and worked with some of our staff on the recipe. It’s turned into a big hit.”

“The thing about the pozole was that when we first tried it, we didn’t know it was going to be so popular with our audience,” Johnson explains. “But then some elementary school students tweeted about it and our superintendent retweeted their tweet.”

Variety is a hallmark of the program, with over a half dozen entrée options on a typical day’s menu at the high schools and three to four at the middle schools.

“One thing we really strive for is to have a nonmeat option at every meal,” Johnson adds. Nonmeat alternatives are also supported by salad bars at all sites.

“One thing we did last year was to make fun names,” she says. “We focused on that last September because the [NFL’s Seattle] Seahawks are really popular around here, so we ended up with some Seahawk-themed names for our menus and we’ll do that again this September since everyone is a Seahawk fan around here …or better be!”

Selections include Russell Sprout Salad, consisting of raw shaved Brussels sprouts topped with a bit of dressing, which was named for Seahawks quarterback Russell Wilson, and the Kamburger, named for star defender Kam Chancellor.

“Because it is named something fun they are more open to trying it,” Johnson explains. “We try to do a theme every month, so in September [Seahawks football] was our theme and in October we’ll focus on farm to school.”

Farm to school is also emphasized with a regular Washington Wednesday event that focuses on products made in state. “We’re working to try to get more local product in here,” Johnson says. “The problem is that we don’t have a lot of storage space in our district, so we really have to work with our local distributor.”

Johnson would particularly like to find a local source of halal chicken to help meet the needs of a substantial Muslim population among the students.

With its substantial proportion of students eligible for subsidized meals due to family economics, Highline maintains a robust meal program beyond lunch.

Three sites currently offer breakfast in the classroom with a fourth potentially on the way this fall.

That will depend in part on logistics being worked out but the district has shown it can be adaptable. Johnson cites one case several years ago where a school had trouble serving breakfast efficiently due to its large enrollment.

“What we did was start a grab-and-go program in which two grades stay in the cafeteria until the bell while others stay for only a certain time and then if they’re not done eating they go to their class with their meal bags,” she explains. “Still others just come in to get their food and then go straight to where they need to go.”

It seemed chaotic at first, Johnson admits, “but now we’re at the point where everyone knows where they need to go.”

Another elementary school with very high volume had students who wanted to get breakfast come in to the cafeteria where they could assemble a grab-and-go package and then, depending on their grade level, either go eat in their pods or stay in the cafeteria.

“In that particular school, they’ve increased their breakfasts by over a hundred a day,” Johnson proudly reports.

Other experiments have included second chance breakfasts at some secondary sites.

The grab-and-go breakfast protocol itself is innovative. Rather than preassembled components, students are given clear plastic bags they can then fill with the items they choose. Because the bags are transparent, they can quickly be checked at the end of the line to ensure all required components for a reimbursable meal are included.

The bags are also sturdy, unlike paper that can tear or boats that can spill, Johnson adds. The only thing she’d like to change is to find a sustainable alternative.

Afterschool food programs currently operate at nine locations in the district. Several of those with snack programs would like to convert to meals, Johnson says, and she is looking into options. One possible solution is a super snack option based on the way the district summer feeding program operates, “where we pack our own meals and we’re looking to see if we can keep that going throughout the school year,” she offers.

The super snack would count as a dinner meal for reimbursement purposes, she adds, “ but its not where I have to have someone there cooking.”