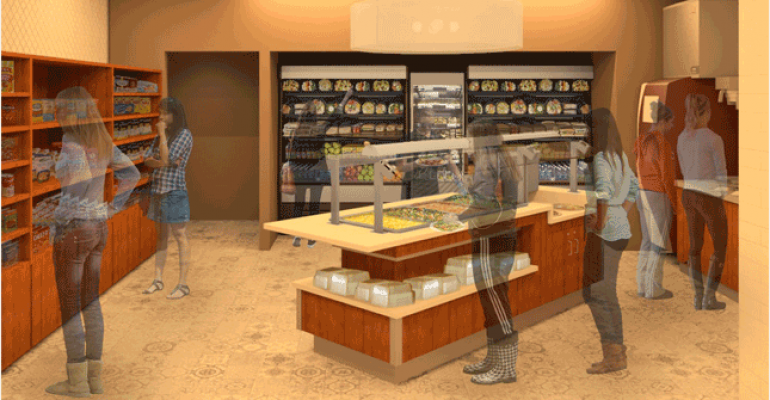 Mount Holyoke College has just initiated one of the most comprehensive reboots of a college foodservice operation in the country with a $50 million project intended to consolidate campus dining in one facility and thereby foster more interaction and a sense of community.

The newly expanded Blanchard Campus Center will, when completed in early 2018, bring together all dining at Mount Holyoke, along with other community spaces such as a concert venue and student clubs.

Currently, the school has six scattered residential dining outlets as well as several retail outlets, which tends to fragment the 2,100-strong student body despite the fact that almost all of them live on campus. And that’s down from a peak of 17 residential dining rooms served by 13 separate kitchens at one point where students dined family style in small, tightly bound groups.

“This has been a long time coming,” says Dale Hennessey, director of dining services. “I’ve been here 23 years and it’s something I’ve been advocating for since I’ve been here. We’ve had the residential dining program for years and it’s very near and dear to our alums’ hearts because it has contributed their long-term friendships and the building of their own communities. So you can imagine the reaction when my previous boss embarked on a feasibility study about five years ago to take a look at whether it make sense to continue to do things the way we’ve been doing them” or make changes.

Hennessey says the consolidated approach made the most sense for a number of reasons.

“We did look at just having fewer dining halls, but that would have been more expensive and we still would have been limited in expanding menu options and being able to react to current food trends more rapidly than we can now,” she says.

Part of the problem is infrastructure issues like storage space and accessibility. Even though the dining department has its own warehouse on campus, some of the kitchens still receive direct deliveries because they are upstairs and lack loading docks.

Currently, the six different dining venues—one of which is kosher—offer different menus at lunch and dinner to provide variety. Retail dining is limited to a grab-and-go outlet in the science center and a coffee bar and a café that offers a meal equivalency in the campus center.

The schedule calls for groundbreaking on the new facility this fall as part of a two-phased process, Hennessey explains.

The campus center café as well as the six existing residential dining venues will continue to operate through the end of 2017, with the new dining center scheduled to open in January 2018. At that point the retail café, along with the whole lower floor of the campus center, will close for renovation, then reopen the following fall with a brewpub and a grab-and-go location in the café space.

Meanwhile, the new residential dining center will offer far more choices as well as modern to-order action stations and create-your-own and self-serve options. Kosher will be component of the mix along with halal meats and allergen-free options.

“We are not in the middle of a town or city,” she explains. “There’s a small place across the street that has a few restaurants, but what we’re trying to create is a hub on campus where students will be able to go and do a multitude of things and have different options for community building on a multitude of levels, not necessarily just in the dining hall but in the complex in general.”

The retail dining options are going to be limited to the brewpub (which will include a coffeehouse) and the grab and go.

“One nice thing that will happen with grab and go is that right now we can do only cold items, but in new facility we’ll have options for both cold and hot grab and go,” Hennessey offers.

Another anticipated change will occur in a longstanding campus tradition called MNCs (Milk ‘n Crackers), a half-hour study break that takes place in each dining hall servery (even those that are closed) between 9:30 p.m. and 10 p.m. Monday through Thursday and features various beverages and baked goods. There is also a community MNC on Sundays in the campus center.

“It’s a delivery challenge and not a good use of either personnel or equipment,” Hennessey says.

She wants to keep the tradition in the new building after the old dining halls are gone, adding programing such as acknowledging birthdays or celebrating athletic achievements by the school’s teams. “It would be a way to build on some current traditions,” she says.

Meanwhile, some new traditions would be added, such as a more responsive dining operation that can meet the expectations of today’s students.

“One thing I’m really looking forward to is being able to respond to student requests on a dime because we’ll have a suite of equipment to do that,” Hennessey says. “There will be no such thing anymore as having the same old menu year in year out. It will be ever changing. That’s exciting!”