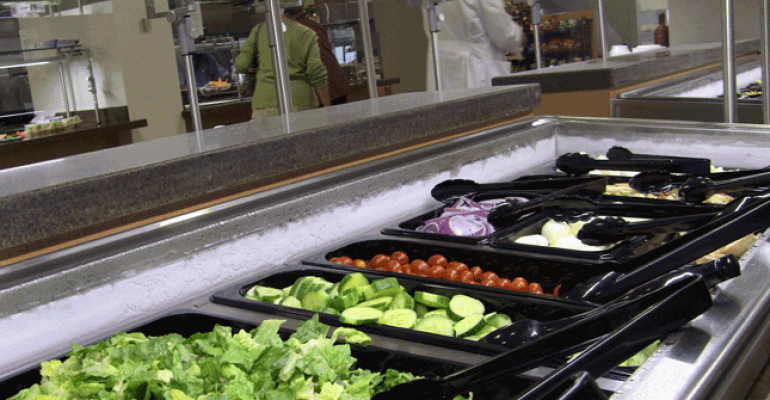 <p>The goal is to have 40 percent of the retail food offerings qualify for the most healthful &quot;E&quot; designation in the EAT labeling system.</p>
Operations

Being located in New England poses challenges for operators wishing to maximize local product purchasing. This isn’t exactly the Salinas Valley when it comes to the growing season.

But as part of the institution’s strong sustainability commitment, Newton-Wellesley Hospital, located just outside Boston, has tried to maximize how much product it buys locally at a reasonable price—and that means plenty of seafood. Local products are highlighted on the menu when they are in season—a New England lobster roll is a summertime favorite—and healthier dining is encouraged with a color-coded system called EAT in which menu items are each tagged as either “E” (eat Everyday), “A” (Alternate) or “T” (Try to limit).

The menu mix in the café is currently an equal mix of each of the three designations but Minette is pushing for the “E” items to constitute around 40 percent.

The café includes entrée, grill, deli and soup stations as well as a salad bar with mostly fresh product. The menu is on a three-week cycle with an emphasis on international dishes like pho soups and steamed pork belly buns to satisfy customer preferences.

Patient dining at Newton-Wellesley is a full room service system that has been in place at the near-300-bed facility for more than three years and operates from 7 a.m. to 7 p.m. daily.

“We’ve really focused the menus to reflect the patient diet,” says Minette, “because the one thing we really try to avoid is telling a patient that something on the menu is something they can’t have. So we have a wide variety of menus to accommodate as many diets as we can, along with seasonal menu inserts.”

The seasonal inserts over the past few months were heavy on dishes featuring a lot of local produce, Minette observes, as well as summer dishes like the kitchen’s own turkey and kale meatballs, which are on both the retail and patient menus.

“We have a lot people in the cafeteria asking where we buy them,” Minette laughs, “but we actually make them from scratch right here.”

Another summertime favorite the kitchen turns out is a New England lobster roll made with locally and sustainably caught lobster.

He estimates, about 85% of the menus, including soups and all sauces, are made from scratch in house.
The local products on the menu result from a concerted effort to do more purchasing from nearby sources, not the easiest thing in Massachusetts.

“We have about a four-to-five-month growing season, so we try to use as much local stuff as we possibly can when we can,” Minette says. “Then, when we can’t, we try to [supplement] as much as possible with as much organic items as we can.”

The hospital hosts a farmers’ market in the cafe during the summer months that includes not only produce from local farms but also local cheeses and breads from small local artisanal bakeries.

Two categories that are plentiful from local sources are fish and dairy. Just about all the fish on the patient and retail menus are locally caught while “we have a huge dairy company here locally, so dairy is definitely local,” Minette says.

Local products are also the focus of a program called Sustainability in Action that showcases local items one day each month in the soup, entrée, grill and deli selections.

One held earlier this year featured locally caught skate at the entrée station, a local shrimp po’boy on the grill, a local salmon salad at the deli and a local fish chowder at the soup station.

Pushing healthier dining in a hospital can be challenging, Minette admits, so he tries to make subtle changes without totally removing choice.

“It’s a high-stress environment for the staff as well as patients and families,” he says, “but what we’ve tried to do on the patient side, for example, is to remove regular sodas and sugared drinks from the patient menu, though people can still ask for them. But by removing it from their eyesight we’ve seen a great reduction of that. On the retail side we still have [sugared beverages], but we’ve rearranged things so the sodas are lower or higher than eye level, while we try to keep the non-sugared beverages at eye level.”

He also holds Meatless Monday events in which vegetarian dishes are featured at the different stations, though those wishing something with meat can still get it at the deli or grill.

Again, the intent is to encourage, not force, changes in behavior.

“My job, our job in the hospital,” Minette summarizes, “is more about education than it is about elimination.”