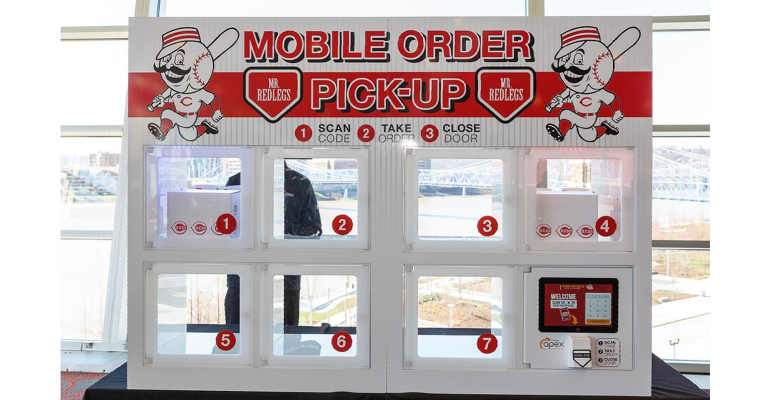 Delaware North Sportservice
Banks of lockers like these at Cincinnati’s Great American Ballpark will allow fans to pick up pre-ordered concessions items without any waiting in line.
Operations

The initiative will allow fans to preorder food and drink through their smartphones and pick it up from a designated individual compartment only they can access.

It’s an old problem in sports venues. A fan leaves his seat to get some food and drink at a concession stand and ends up missing a good chunk of the game because of the long wait in line.

As a possible solution to this problem, some venues have experimented with remote ordering options that deliver the food and drink to fans in their seats, but this is labor-intensive and can be rather inefficient if the servers have to make time-consuming trips through crowds to make relatively few deliveries.

As a result, preorder/seat delivery programs tend to be confined to designated sections, usually premium seats, which leaves most fans with the old dilemma.

However, one possible solution that offers every fan with a smartphone the convenience of preorder and skipping the waiting in line will be piloted this summer at the Great American Ballpark in Cincinnati, home of Major League Baseball’s Cincinnati Reds.

Developed by a company called Apex Supply Chain Technologies, it lets fans use their smartphones to place food and drink orders and then pick them up when they are ready from a designated individual locker. No waiting in line, even at a pickup window.

The fan uses the MLB.com Ballpark app to place the order, which transmits it to concessionaire Delaware North Sportservice’s concessions order management system. When the order is ready, a message is sent to the fan’s phone designating the locker number where it can be picked up, along with a QR Code that triggers the opening of the locker.

“We want to pilot this because we really feel that this is an interesting new service style that we can create, and we hope to get a lot of learning out of it between now and the end of the baseball season,” says Don Dierig, Sportservice general manager at the Great American Ballpark, who decided to pilot Apex’s locker pickup system after being impressed by a demonstration at a Delaware North Technology Summit last year. He plans to roll it out at the team’s first post-All Star Break homestand in mid-July.

Initially, two banks of 18 lockers each will be set up in one of the ballpark’s Porkopolis concession stands, where some 40 traditional ballpark-type food and beverage items ranging from hot dogs and peanuts to beer and soda are sold. All of the items will be available for the preorder/locker pickup service.

A second location with two more 18-locker banks will be added later after the initial foray is deemed to be operating smoothly. This second location will offer a more elaborate menu with customized sandwiches and 36 types of draft beer, including craft beers.

The initial setup “is to see what it will do in a traditional concessions environment,” Dierig explains, “and then we want to do a test on how it would do where you can customize orders with lots of selections.”

A key question will be maintaining temperature integrity of the food/beverage orders, as the planned lockers currently don’t have heating or cooling capabilities.

“We want to see how ambient temperature does with our initial pilot,” Dierig explains. “Apex is prepared to make them either heat or cold sensitive depending on what we find during the pilot.”

He says the system will monitor the amount of time the orders sit in the locker and will send an alert to the concessions stand staff if any item exceeds its designated limit.

The system was unveiled at a media event at the Great American Ballpark earlier this month and will be promoted to fans through scoreboard mentions. A media blitz will follow as the time for the system’s debut draws closer.

“I think it’s a service style that has a lot of interesting [possibilities] that we can [use] in the future by retrofitting a lot of our concession stands to give people a choice of [getting concessions] the traditional way or by using their phone and then picking it up from their personal locker,” Dierig says.