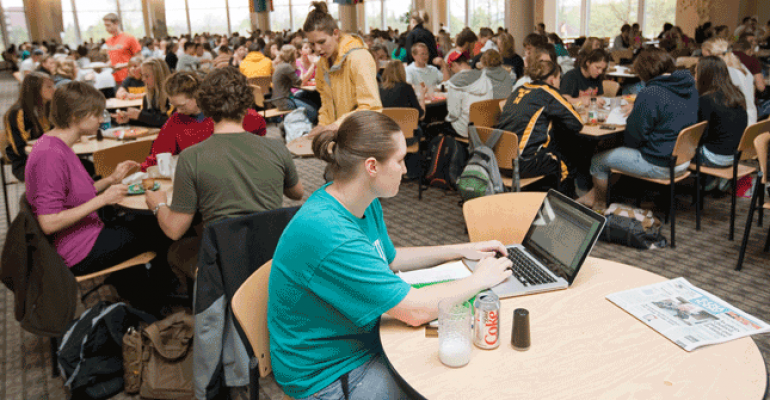 Waste not want not at Gustavus Adolphus College

​Gustavus Adolphus College is one of those schools that constantly appear on best campus food lists, but the small private college has a lot more going for it in its dining program than just great food that appeals to students. It is also one of the greenest colleges in the country, composting all its recyclable waste, including all disposables, which is then used to fertilize the school’s garden, the Big Hill Farm.

The roots of the current dining program at Gustavus Adolphus go back several decades, to the mid ‘90s, when Steve Kjellgren took over as dining director.

“The program was in pretty rough shape in a building that was 30 years old and built for a thousand fewer students,” he recalls. “I got a group of students together and asked [two questions]: ‘What is it you hate about what we have right now, and what is it you would love to have if you could have anything you wanted?’”

“In the all-you-can-eat system, the lighter eater is paying the same as the larger eater, and they didn’t feel that was fair,” is the way Kjellgren explains the equity objection.

As for waste, “we had students who stood on the dish return line and ate off of plates just in protest of all of the waste,” Kjellgren recalls. “The facility was crowded so you try to get as much as you can in a hurry because you never know if you can get back in the servery area. So [they were getting] four glasses of milk and two juices and three bananas and eight cookies and [so forth even though] you can’t eat it all. And with all-you-care-to-eat you can’t take it out, so it [ends up] in the trash bin.”

Access was a matter of serving hours and student schedules.

“In a program like we had, traditionally you’re open for breakfast from 6:30 to 9:30 and lunch from 11:30 to 2:30 and dinner from 4:30 to 7:30. [The students] said, ‘You know, our lives are busier than that; we need you to be open from early in the morning to late at night so we don’t have to worry about getting off the athletic field or out of the fine arts practice to get to dinner. We want to come in and eat dinner whenever we want.’”

Kjellgren was determined to find a solution that could resolve these three issues. To do that he had to look around—“this was 1995, so there’s not the internet to go looking for a program,” he laughs, “so I did some travelling.”

What he finally came up with was what he describes as an “a la carte marketplace-type program where meal plan students eat in the same dining room as off-campus students, as faculty and staff and as guests and townspeople.”

The a la carte approach would eliminate the equity issue since everyone would be paying only for as much as they were ready to eat, a system also sure to reduce waste, Kjellgren observes.

“We figured, if you’re paying for five bananas, chances are you’re not going to throw four in the garbage.” He estimates the new system reduced consumer waste by around 85 percent, which also helps keep prices down.

As for access, the new eatery would stay open extended hours with the number of choices based on traffic patterns.

“When it gets busy we open up more stations,” Kjellgren explains, “and when it’s slower we’ll just slow ‘em down, but we’ll stay open and you can come in and grab a cookie and a coffee, a bag of chips or a burger and fries or piece of pizza whenever you want.”

So the plan was in place by 1997. Unfortunately, the means wasn’t, at least until fate intervened.

“We had no money to build a new facility, but we had a plan, a designer and an architect,” Kjellgren recalls. “Then a tornado came through the college and basically destroyed most of the buildings.”

Suddenly, funds from insurance and other sources became available so “we built the facility much sooner than we would have otherwise,” Kjellgren says.

With about twice the square footage of the original building to which it is attached as a semi-freestanding addition, the new structure included a multistation servery called the Marketplace along with the attached Evelyn Young Dining Room, plus a coffee shop called the Courtyard Café on the lower level.

“We now have one central dining location for a campus of approximately 2,400 students,” Kjellgren says. “It really works well and creates this culture of community where we aren’t all separated across campus.”

The eatery also draws some diners from the community, even some teens from a high school located two blocks away.

The Marketplace operates eight food stations when it’s at full capacity, and is open from 7 a.m. (9 a.m. Sundays) to 11 p.m. daily.

The stations include casserole, grill, Asian, pizza, rotisserie and vegetarian concepts as well as United Nations, which offers a rotating series of international dishes.

Resident students are still required to buy meal plans, but the plans offer the flexibility of using the declining balance accounts however they want, from guest meals to takeout.

The retail-oriented meal plan design even serves an educational function aside from its core purpose of keeping students fed. “It’s interesting what a declining balance meal plan adds to students’ education in that they haven’t had to necessarily run a budget before,” Kjellgren observes.

“When we first did this 17 or 18 years ago, I had phone calls from moms and dads saying, ‘You mean you expect my son to have to manage a budget?’” he recalls. “I told them, ‘Well, we’re a full-service educator here, so, yeah, we do expect your son to manage a budget.’”

The education also extends to calibrating the balance between moral choices and fiscal realities.

Kjellgren says he gets the usual student questions about grass-fed beef, free-range chicken, fair trade coffee and so forth and his response has been, “Who am I to be the moral compass for you all” and make the choices of what to serve.

He doesn’t. That is where the Kitchen Cabinet comes in.

“It’s not like the traditional food committee of college students who sit around and complain about how the soup on Thursday wasn’t very good,” Kjellgren explains. “Rather, we talk about what kind of chicken you put in that soup and is the soup MSG-free.”

The Kitchen Cabinet also explores moral/philosophical issues like how suppliers treat their workers or when to purchase something locally rather than from a supplier further away.

The Kitchen Cabinet was launched a decade ago and while it remains an informal entity—it has no official standing at the school—“it wields a lot of power because it’s got some power players in it,” Kjellgren says, “including some very brilliant faculty, some high-level coaches from our athletic teams and some very active students.”

Membership in the Kitchen Cabinet, which meets monthly, is capped at 20 and is composed of about a third each of students, faculty and staff/administrators.

“If Big Hill Farm drops off 200 pounds of eggplant, we need to make that into something that college students will think is pretty cool,” Kjellgren says. “It can be challenging, but it [makes things interesting for the] back to the house because the cooking staff has to be creative.”

Local product also comes from an alliance with a local food hub, the Mankato Valley Action Council (MVAC). Now in its third year, the relationship with the cooperative is something Kjellgren says he wanted for a long time.

“I remember talking to some local farmers 15 years ago when they asked how they might bring their products here,” he recalls. “I told them I can’t have 25 trucks backing up to my loading dock, but if they could figure out some way to centralize a location where they can bring their goods to be washed and boxed up and then brought to me,” we could be in business.

It was more than a decade later that an MVAC representative stopped in and asked if the college would be interested in purchasing from the group.

“We were one of the customers that got them off the ground,” Kjellgren says proudly.

Today, MVAC’s members supply Gustavus Adolphus with fresh produce as late into the year as possible given Minnesota winters. The group also supplies free-range eggs and Kjellgren has an arrangement with a farm located about 70 miles from campus for ground turkey.

The conversion from a traditional all-you-care-to-eat to an a la carte based meal plan system produced some anticipated changes, Kjellgren says, but there were unintended consequences as well.

“The deep dark secret of meal plans is that they’re money machines because of the missed meal factor,” Kjellgren explains. “Colleges charge students for 20 meals a week but they only eat 13, and it’s a great revenue source.”

A la carte is more overt, he explains, as students can see exactly how much money they have in their accounts, so they’re much more likely to spend it down, which means “you don’t have that huge cash cow that’s hidden from everybody in the traditional meal plan” any longer.

Meanwhile, he adds, a la carte allows more flexibility on the part of the dining operation, so, for example, “if the market changes for the price of oranges you can charge more for an orange, or if students want to have line-caught salmon from Alaska, we can serve it, but we’re going to have to charge enough to cover the cost for it.”

Of course, while the meal plan approach has changed, the guaranteed revenue stream remains as students living on campus must purchase a plan.

“We just have to manage the expense part of it,” Kjellgren says.

The conversion to the a la carte plan also impacted finances beyond the dining area.

Changes had to be made to compensate, and they have been.

“It’s a lost revenue stream and that’s the biggest hurdle,” Kjelllgren maintains. “When I’ve had other colleges come visit us they’d say, ‘Gosh, there’s no way we could make this fly because we need to have that X percent as additional revenue.”