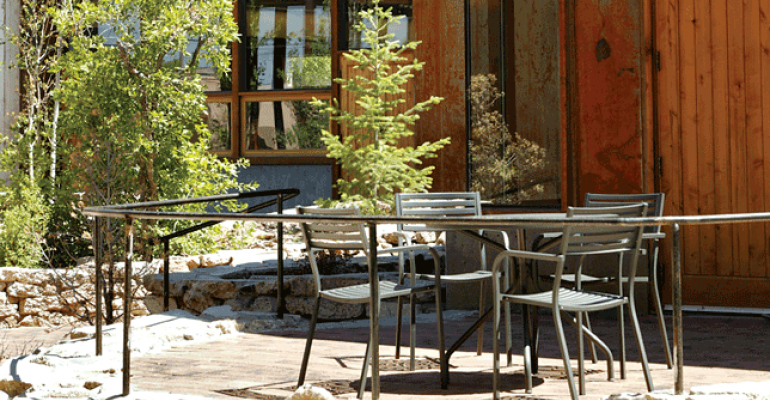 <p>The patio outside the main campus cafe is the site of weekly free soup and bread meals to bring together the campus and surrounding communities.</p>
Operations

Prescott College is a small institution with an enrollment of around 500, of which only about a hundred live on campus, and that makes fostering campus community especially challenging. One strategy the school has traditionally employed is a free soup and bread meal every Wednesday during the school year that brings together students, staff and people from the surrounding community for an outdoor gathering (this is Arizona after all).

The Wednesday gatherings generally go from around noon to 1:30 p.m. and involve bread and four to six soup choices.

“We usually just set up tables outside and whatever kids, staff, faculty and [people from the] community want to come in, we just offer free soup and get to know everyone,” is the way Foodservice Director Mark Montague describes these gatherings. “We’ve had a local massage place that will bring a chair once in a while and give out free five-minute massages. [A while back] a smoothie place that’s nearby would come over and give out free samples to get customers over to their place. So we try to open it up to that kind of atmosphere.”

In addition to the communal dining and occasional massages, the gathering gives everyone a chance to catch up on campus activities: a climbing club representative may talk about its next outing or a club might announce an open mike night coming up.

The dining operation itself centers around the Crossroads Café, the only dining venue on campus, which specializes in scratch-made food based on sustainably sourced and ethically produced ingredients.

“Crossroads is not like a cafeteria at a big college where you grab a tray and have all these different setups,” explains Montague. “It’s a small café and seats maybe 75 people, but we’re open to the public and that’s a big thing, and we want our community to know that.”

Informality is the norm at Crossroads.

“You come up and order at the counter and then we put up the food at the window and holler out your name and you go up and grab it,” is the way Montague succinctly describes the operating model.

Basically, everything is cooked from scratch at Crossroads.

“We don’t open up too many boxes of things,” Montague says. “I try to order local, or at least as local as I can get,” which generally means Arizona grown/raised. “That’s as local as I can get it,” he explains. “Yes, there are more local things, but they get pretty expensive.”

One thing that is local is the beef for the burgers, which comes from a local rancher.

This being the Southwest, Mexican dishes are plentiful on the menu at Crossroads, with standards like tacos, quesadillas and burritos. Other favorites are products of the dining operation’s smoker unit.

“We have a clubhouse sandwich and a turkey sandwich [on which the meat is] all shaved off a smoked turkey I do here on campus,” Montague says. “I’ll also do specials like pork barbecue sandwiches.”

Most items are also available in meatless versions and the café accommodates all the major diet restrictions such as gluten-free. The soup bar will always include meat, a vegan and vegetarian selections.

Customers have an option of all-you-can-eat or a single serving of the soup or salad bar.

The standard menu is kept to a minimum but bulked up with the specials to offer variety “so I don’t have to keep all that stuff on there for the 150 people on campus,” Montague says.

Despite the on-campus population, the business at Crossroads is strictly breakfast and lunch during the week. It shutters evenings and weekends.

“We started shutting down in the evenings and weekends about five years ago when they opened dorms with their own kitchens,” Montague explains. After that, no one came to Crossroads when classes weren’t in session during the day. “If they would utilize it, I would stay open, but the traffic too minimal to [do so].”

Dorm dwellers also have plenty of nearby off-campus options if they don’t feel like cooking or microwaving a meal at home and nightlife that might keep students on campus is minimal.

“We stay open until 5:30 and then if someone wants to come up and grab something, I have a to-go cooler with chilis and soups and sandwiches they can take back to their dorms,” says Montague.

The school requires a meal plan of resident students. It is based on a declining balance system that gives plan holders a 10-percent discount at Crossroads when they use it. The minimum required purchase this fall is $400.

In addition to campus traffic, Crossroads draws some off-campus customers, but it is hampered by its location.

“We’re about literally a half block off the street in the center of campus, so people that drive by don’t even know we exist, and [even] some people who have lived here 10 years don’t know were here,” Montague laments.

“We’ve tried to put advertising out to say we’re open, but its hard because out-of-sight-out-of-mind and if you can’t park in front of the restaurant, people just don’t want to go and I understand that.”

Despite that, he adds, “the people that do come love the atmosphere in the café. We have espresso, lattes and cappuccinos, and the breakfast and lunches are really good [because] we make everything from scratch.

The low level of business is actually a plus for customers “because its not always super crowded so they can get their lattes and their food in three to five minutes, and people like that,” Montague admits. “Were it to become super busy we might lose that traffic, but that would be a great thing for me to have that happen, that’s for sure.”

The dining department’s business is boosted by a substantial catering business.

“During school season I’ll keep about 15 people on because I do a lot of catering,” Montague says. “When all the Ph.D. online students come through for the colloquiums every year, we’ll have 150 people I have to do breakfast, lunch and dinner for, and those usually last a week at a time if not more.

“We do have these programs coming through here and it’s better if I feed them than that they get someone else to come in and do it or they went out and ate at a restaurant every night,” he offers.

Prescott’s dining department also has off-campus catering business such as weddings, as well as some regular clients such as a local lodge for which it caters a regular dinner each month.