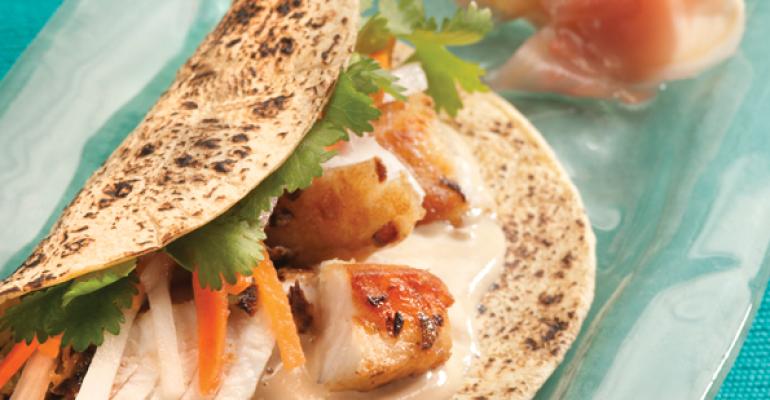 2. To make the sesame-soy yogurt sauce, in a small bowl, mix together the yogurt, tahini and soy sauce. Cover and reserve in the refrigerator until needed.

3. Dredge the barramundi fillets in flour.

4. In a sauté pan, heat the vegetable oil until hot. (Add an additional tablespoon of oil if needed.) Sauté the fillets, turning over once, until both sides are crisp and the fish is cooked through. Remove the fillets from the pan and place on paper towels. Once cool enough to handle, break the fillets into small pieces.

6. In the center of each tortilla, place a dollop of yogurt sauce and spread it out evenly toward the tortilla’s edge. Divide the barramundi evenly among the 4 tortillas, placing the fish in a line down the center of each. For each taco, top the barramundi with Asian Slaw and crown with fresh cilantro. Fold the tortillas and plate tacos with slices of pickled ginger on the side.

1. In a pot, bring the water, sugar, vinegar, salt and chile flakes to a boil. Remove from heat. Add the daikon and carrot. Cover and let marinate in the refrigerator for at least 2 hours and up to 48 hours. When ready to serve, drain the water from the vegetables.