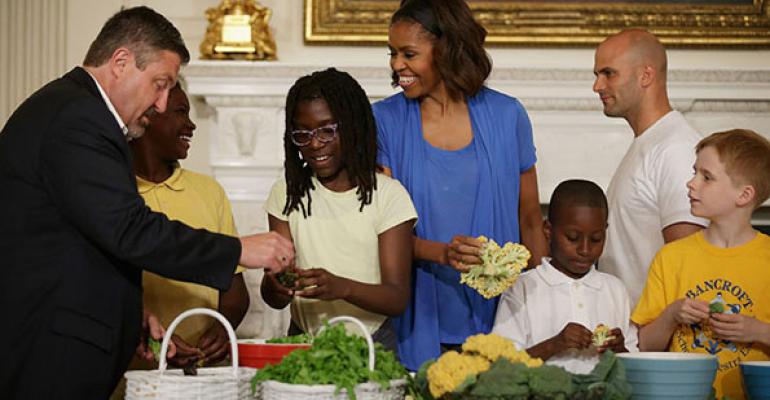 The debate over the increasing standards mandated by the Healthy, Hunger-Free Kids Act has reached a fever pitch.

We were inundated with letters responding to Eric Stoessel’s editorial last month asking school foodservice directors for their opinions on the increasingly public and political debate between the USDA and SNA on the Healthy, Hunger-Free Kids Act. He wondered what the people in the trenches really thought about the tougher requirements coming this year and several foodservice directors responded.

The SNA has made their positions clear, and recently outlined them again in a letter to First Lady Michelle Obama and USDA Secretary Tom Vilsack. In addition to the waiver being debated in Congress that would allow school programs operating at a net loss for six months to get a one-year waiver from the HHFKA requirements, the SNA is calling on the USDA or Congress to act to:

• Retain the current requirement that 50% of grains offered with school meals be whole grain rich, rather than further increasing the requirement to 100%.

• Retain Target 1 sodium levels, and suspend implementation of further sodium levels unless and until scientific research supports such reductions for children.

• Retain requirements to offer a wide variety of fruits and vegetables, but eliminate the mandate that students must take a fruit or vegetable with meals.

• Allow any food item permitted to be served as part of a reimbursable meal to be sold at any time as a competitive food.

The USDA and the first lady seem committed to holding to the letter of the law. A recent press release from the USDA says support for the act is growing. It included comments from various sources, including the first lady, Vilsack and even a quotation taken from a letter written by 19 former presidents of the SNA:

"We the undersigned past presidents of the School Nutrition Association, understand that major change takes time and a commitment to the goal that prompted the change. We believe most communities and schools want school nutrition programs that help children learn to enjoy healthy foods. We are confident that the broad public support for HHFKA and USDA's demonstrated willingness to work with school leaders to solve implementation issues will prevail and create stronger school nutrition programs."

With the 2014-2015 school year now underway, the clock is ticking. New sodium targets, the increase to all grains being whole grain rich and more are right around the corner. Are schools ready? Will the USDA relent or will Congress take action? We asked, and many school foodservice directors answered with their own stories.

Please email [email protected] with any more feedback or comment below.