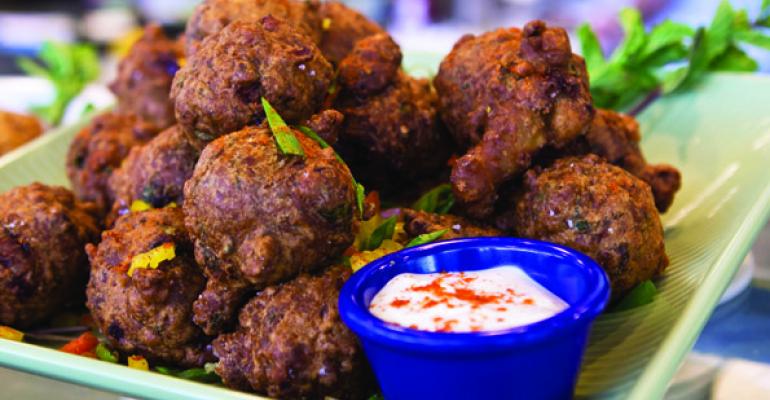 There's something about a fritter: the crisp, crunchy outer layer giving way to a melt-in-your-mouth interior, making it a very craveable snack that conjures up images of county fairs and summer fun. Fritters are also super shareable and customizable, from the flavors inside to the selection of dips for service, making them a slam dunk small-plate or appetizer.

Fritters were among several demonstrations from the Idaho Potato Commission, the American Lamb Board and the Michigan Turkey Producers Co-Op, Inc., during a one-day educational workshop held at the University of California-Berkeley in May. It was hosted by Ida Shen, executive chef and assistant director, Cal Dining, and produced by Dozal and Company, a commodity promotional firm. About 25 UC Berkeley staff members took part.

Shen selected the fritter recipe as a good example of an offering that was easy to prepare, appropriate for high volume, and one that fit into Berkeley’s late-night dining program. She also wanted something that could work in Berkeley's concession operations.

Shen was also adamant that the fritter recipe not only taste great, but also accommodate more than one dietary restriction (gluten-free and, with modification, vegan).

So the presenter, Frank Petersen, CRC, product R & D chef for NoName Steaks, St. Michael, MN, worked on several iterations: one with chickpea flour, another with almond flour and another with cornmeal. The cornmeal worked best with the fritters’ mashed potato base. 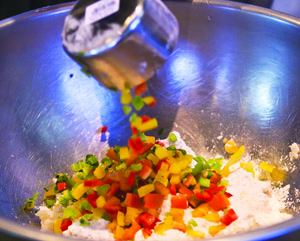 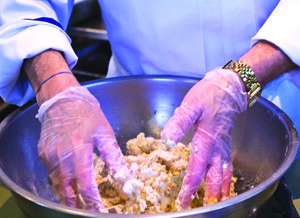 2. Mix it all up and fold in whipped eggs. (If the recipe is to be made vegan, eggs can be eliminated. Just be aware that the fritters will be denser.) 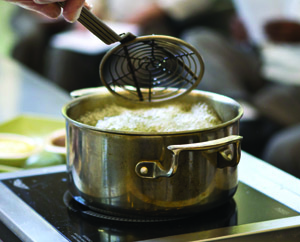 3. Using a #30 portion scoop, drop fritter batter into deep fat fryer or Swiss tilt fryer at 350°F for 5 to 6 minutes, or until cooked through and a deep golden brown. 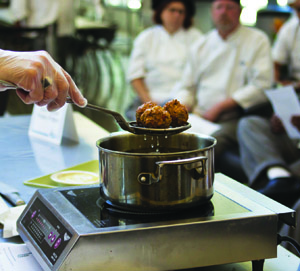 5. The finished fritters can be served with a variety of different sauces. The sky’s the limit: sweet & sour sauce, ranch dressing, Sriracha aioli, tomatillo salsa, even barbecue sauce.

*If the recipe is to be made vegan, eggs can be eliminated. Just be aware that the fritters will be denser.