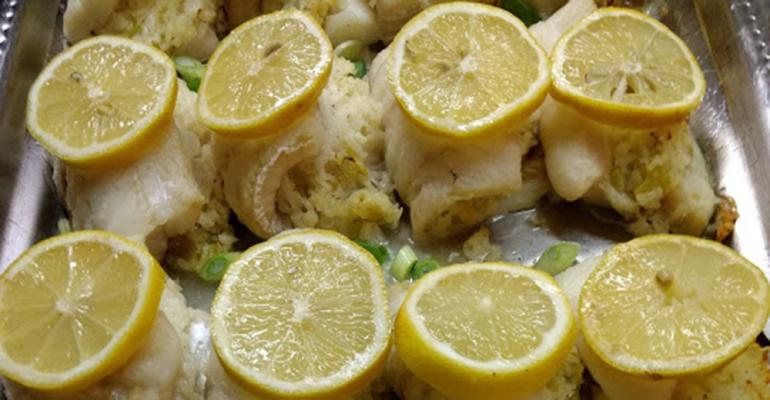 Phillips Exeter Academy
Seafood such as haddock is served for dinner on Wednesdays and at lunch on Fridays.
Operations>Production

As one of the first secondary schools that partnered with Red’s Best, a Boston-based seafood wholesaler that aggregates catch from small, independent New England fishing boats, Phillips Exeter Academy has tested the waters of what works and what doesn’t when sourcing and serving sustainable seafood. In the four years the program has been in place, the Exeter dining team has served 32,000 pounds of fresh fish to the student body.

In the summer of 2013, through Exeter’s Sysco representative, the dining team met CEO Jared Auerbach of Red’s Best, and learned about the impact of fish that’s sustainably caught and sustainable in terms of aquaculture, and also sustainable for local fishermen’s livelihood.

“We went to his place on the wharf in Boston and he educated us on what he does and why he does it; this is his passion and that’s the foundation and the roots of what sold us on taking it forward at Exeter,” says Melinda Leonard, associate director of dining services at Phillips Exeter Academy, in New Hampshire.

“Introducing species like monk fish, skate and hake diversifies the palates of the school community, purchasing those underutilized species supports the local New England fishing industry, and one of the benefits of this is knowing exactly which boat a particular fish was caught,” says, Mike Como, manager of Elm Street Dining Hall, summing up several of the positive outcomes of a program like this. Here are some best practices the Exeter dining team has learned along the way:

The sustainable seafood is distributed through Exeter’s primary vendor, Sysco, but at the beginning, when it was time to determine exactly how much seafood should be ordered, “we had to learn by doing,” Leonard says. “We found that based on the popularity, the quality and availability, we started out ordering up to 150 pounds of seafood a week, but consumption has leveled off to an average of about 80 to 100 pounds a week.”

Begin with some classic preparations.

Exeter students have responded very well to classic New England-style fish (whether it’s skate or any other under-utilized species) simply pan-seared with lemon and a light sprinkling of crunchy breadcrumbs. Fish tacos using any white fish have also gone over very well. And of course, the good old fish fry has universal appeal.

But don’t be afraid to have fun with new ideas.

“The fun part is always preparing the food—that’s why we’re in the food business,” Leonard says. “So, highlight that creativity for the culinary staff to take it to the next level…beyond fried. We recently did a paella with mussels and clams.”

Make education part of your efforts; tell a story.

When introducing sustainable seafood, meeting a local fisherman goes a long way in making an impression. At Exeter, all-school assemblies have been used as a place for fishermen from Red’s Best to talk about what they do, which generates excitement. Point-of-sale and greeter-board marketing materials at dining locations also help tell the story.

At a school like Exeter, in which the majority of the 1,025 students are boarders, there are more mealtimes, and thus, more opportunities to offer different types of fish. But do so on a set schedule in case students who may miss a meal due to sports or other activities can enjoy fish too. Seafood is on the menu “every Friday for lunch and every Wednesday for dinner, so everyone has a chance to get fresh fish,” Leonard says.

While Red’s Best is Exeter’s primary hookup for sustainable fresh fish, it’s not the only fish in the sea. Exeter has also been working with the Gulf of Maine Research Institute (GMRI), with their many educations resources and to get different types of fish.

“We cook to order for someone who doesn’t want the sauce, or if it’s fried, we can steam it to order,” Leonard says.