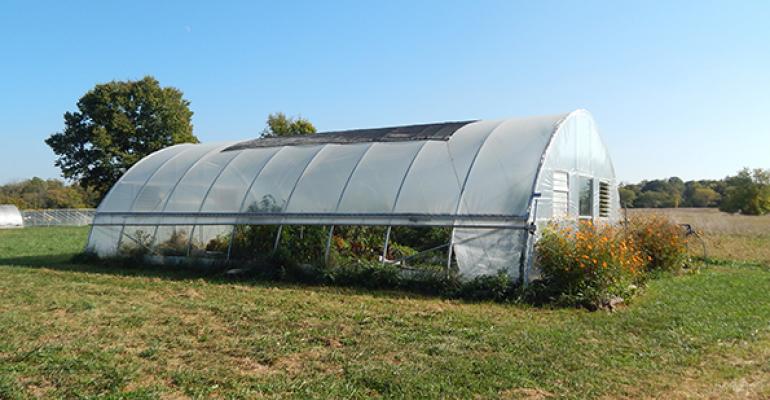 Antioch strives for a meal program fit for the college's philosophy

Communal meals featuring local, sustainable items are served instead of the typical overabundance of options found in a college dining hall.

When Antioch, the Ohio-based co-operative college famous for its focus on social justice, reopened in 2011, the university wanted a meal program that echoed its philosophy. Isaac Delamatre, who had briefly attended the university before heading to culinary school, had some ideas to achieve that vision.

“I thought to keep Antioch relevant and at the forefront of political activism, we needed to focus on sustainability issues,” says Delamatre, who became foodservice coordinator when the school reopened. “My area is food and food activism, so my idea was to create a dining program that utilized not only from-scratch cooking methods, which are largely being lost in today's foodservice culture, but to source as much of our produce and product locally as possible, in addition to using our own on the campus farm. So I came up with a list of priorities, where we use as much as we grown as possible and grow as much as we can ourselves. I think that’s the most responsible, ethical way to produce food is to do it yourself if possible. And then utilize the community around you, to build those relationships. It’s the only way to guarantee integrity.”

Delamatre was perfectly positioned to fulfill his ambitious goals. When he pitched his idea to Antioch, he was working in a restaurant in Yellow Springs, where the school is located, and had already developed relationships with many local producers and farmers. In addition to restaurant kitchen experience, he also had worked at a local farm for three years.

“I had good relationships and rapport with a lot of local growers,” Delamatre says. “There were some up-and-coming farmers that were getting going right as the college was getting going, so we developed those relationships and we were able to grow together.” The school has 250 students currently enrolled, will be at about 300 in the fall and will top out in a few years at between 500 and 600 students.

The Antioch Farm supplies nearly 30 percent of the school’s food. There’s one acre of annual garden beds, which supply the school with kale, onions, green beans and other vegetables. And one acre of food forest—“we’re practicing a little permaculture technique (combining natural landscape with edible landscaping),” Delamatre says. There are chickens that roam cage-free, fertilizing the grass and supplying students with eggs. And lambs control the grass around five acres of solar farm. “We’re harvesting sun as well,” Delamatre adds. There are also a few lamb dinners throughout the year.

The Antioch Farm and kitchen get a lot of help from the school’s students. Antioch is a work or co-operative college that requires all students to work about four times a year. Many students leave to work at businesses or nonprofits around the world, but some stay and work on the Antioch Farm. The school also gets help from students on campus through programs similar to work-study. Although the college does not receive financial aid yet, it gives employment to students. About six students a term work on the farm and another 30 work in the kitchen, Delamatre says.

In the kitchen, there are no deep fryers, and the college stays away from high fructose corn syrup and artificial sweeteners and preservatives. No soda can be found in the dining hall either.

Delamatre doesn’t like to think of it as an exclusionary policy, what the college does include in its meals is more important. Antioch is committed to serving grass-fed beef, pastured pork and local chicken. To illustrate his point, Delamatre can rattle off local farms he works with and their locations. His philosophy is “mostly just source as much as we can from our friends, really.”

While there’s always a vegetarian, vegan and gluten-free option, along with a well-stocked salad bar, the endless choices seen on many college campuses didn’t appeal to Delamatre. “Our service style is a little bit different than your conventional collegiate dining establishment. We’re intentionally not pursuing a food court or restaurant-style experience,” he said. “We felt that that takes away from the communal aspect and social aspect of eating. So we serve a common meal. It’s an all you-care-to-eat buffet.”

Delamatre hopes Antioch’s meals can be an example for other schools. He urges his “colleagues to pursue local foods in a serious way.” By doing so, “they’re going to have more opportunity to educate, which I think should be everyone’s priority on a college campus.”