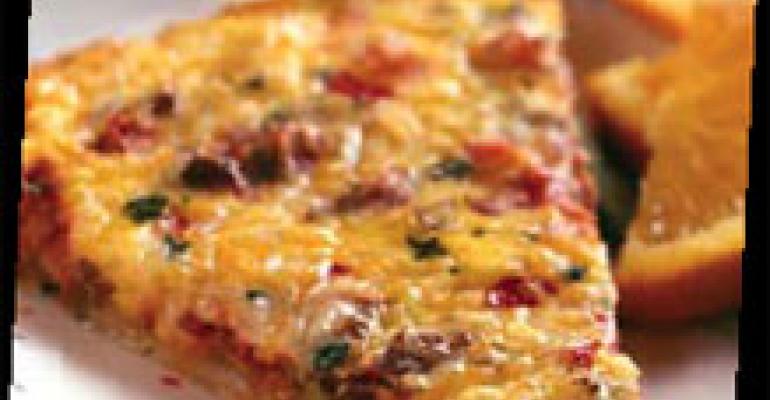 Margaret Happe
General Manager
Rancocas Valley High School
Mount Holly, NJ
“About three years ago we started a made-to-order omelet bar in our high school. Students love watching their food being made fresh, plus they get to choose which ingredients go into their omelets. Students each get a 5 oz. cup. As they walk through the line they can put anything they want into the cup. We have everything from red and green bell peppers to all kinds of cheeses, onions, tomatoes and spinach. The variety of ingredients keeps the concept fresh and interesting, even if ham and cheese are still the most popular type of omelet.

“The omelets are reimbursable, unless a student opts to make one a double omelet, in which case it becomes an a la carte item. We do a number of other made-fresh items like pancakes and French toast as well.”

Todd Foutty
Director of FS Operations
The MetroHealth System
Cleveland, OH
“When we opened the new café in April, we began selling breakfast paninis. They’ve been a huge hit as they are portable, satisfying and delicious. We offer paninis with bacon egg and cheese, country ham egg and cheese, Southwest tomato and cheese, as well as two cheese and egg as a vegetarian option. We use thick Italian round bread to makes the paninis more satisfying, with a denser crunch.

“While we sell more breakfast paninis in the morning, we have found that they are a popular entrée item throughout the day, especially for second- and third-shift workers.

“We also put in a smoothie bar that at first didn’t start production until 10 am. We found there was a demand for smoothies during breakfast, so we started making them earlier and it’s been very successful.”

Susan Weller
Senior Director Retail
Compass Group, The Americas
Chicago, IL
“We are seeing an industry-wide shift back to breakfast. Some probable reasons: Longer work days and more vehicular traffic cause workers to leave earlier for work; breakfast is a less expensive “eat-out” alternative, so the perception of value is higher; and the focus on health and wellness suggests that a “healthy start” to the day increases energy levels.

“At Compass, we have two new wellness and balance-focused brands in which the breakfast offer leans more heavily toward hot options. It’s a nice alternative to the usual yogurt, cereal and/or fruit alternatives. They are the O’Naturals and Naked Pear Café.”