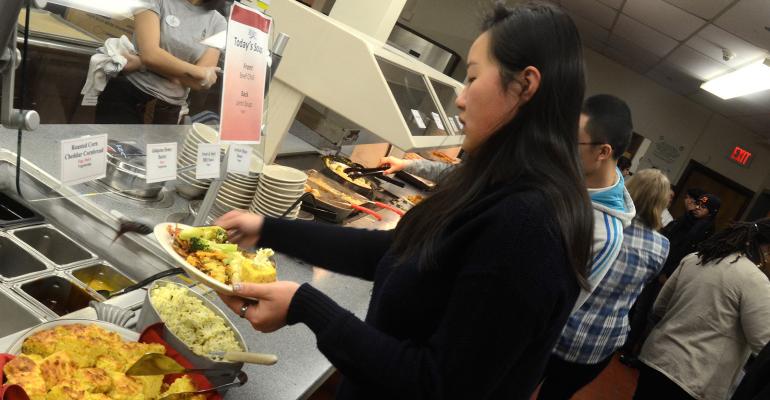 Risley Dining Hall boasts five food stations that are all 100 percent free of not only gluten-bearing ingredients but also peanuts and tree nuts.

Cornell University celebrated the reopening of it Risley Dining Hall last month with a gala dinner event that featured cookbook author Chef Amy Fothergill, an alumna of Cornell’s School of Hotel Administration. Fothergill worked on the evening’s menu and was there to sign copies of her book “The Warm Kitchen,” from which the recipes being used derived.

The reason for the celebration was that Risley is now officially a gluten-free, as well as peanut- and tree nut-free, dining venue. It was certified as such by the Kitchens With Confidence organization, which works with foodservice operators to ensure that their offerings are safe for those with specific food allergies.

“It was great. Everyone had a great time,” says Michele Lefebvre, RD, CDN, director of nutrition management for Cornell Dining. “In fact, I had the mom of a student who is very sensitive to gluten e-mail me to say how happy she was to see we are dedicating an entire location to being gluten-free. And we haven’t lost the flavor.”

The conversion of Risley Dining was a station-to-station process that began almost two years ago, Lefebvre says.

“We changed the stir-fry station so all the sauces were housemade and we changed out the lo mein noodles to either rice noodles or rice. That went off without a hitch. We also had a peanut sauce we removed.” Crepes made with nut-free Sun-tella spread were a big hit at the Risley Dining grand reopening dinner. Photo: Cornell Dining

The next step came last spring when the pizza/pasta station, a concept traditionally full of gluten-filled ingredients, was replaced with a nacho bar, which more easily adapts to gluten-free selections.

The final steps were taken last summer, when the all the facilities were renovated with new equipment and smallwares to remove any traces of previous allergen contamination.

By the fall, it was ready to receive students, even as the certification process was initiated.

“They sent an auditor in mid-November,” Lefebvre recalls. “Before that, we had sent them our three-week menu cycle and a list of the ingredients used on the cycle.”

Certification came a couple of months later, and Risley now operates under the standards set by Kitchens With Confidence.

Now that it’s certified, Risley undergoes monthly testing to ensure it stays in compliance with the gluten/peanut/tree nut-free standards. Kitchens With Confidence actually certifies foodservice facilities as free of half a dozen other common food allergens, but Lefebvre says there are no plans at this time to pursue any more of those at Risley. Gluten and the nuts “seem to be the biggest offenders” among food allergens, she says. “And we feel we cover many of the other areas with what we already serve. For example, our vegan dishes eliminate dairy and eggs.”

Risley’s five stations in addition to the stir -ry and nacho bar include entrée, grill and soup concepts. The venue is one of 10 residential dining all-you-care-to-eat facilities on the Cornell campus, and the only one with the specialized menu, so it attracts students needing or wishing to avoid gluten and nuts.

The grand opening dinner attracted almost 350 students who wanted to sample the items and meet Fothergill.

“Everyone loved the crepe station,” Lefebvre reports, noting that instead of the popular commercial Nutella spread often used on crepes, the station substituted the nut-free alternative Sun-tella, which is made with sunflower seeds.

It just helps demonstrate one of the key lessons of Risley’s new approach, Lefebvre summarizes. “The big thing here is that you don’t have to sacrifice a lot, especially flavor, [to eat gluten-free] so people are not missing anything.”