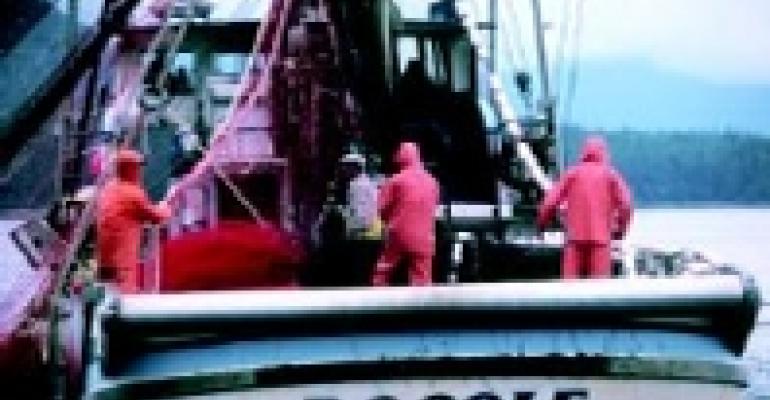 When he first arrived at the Country Club of Land Fall, Wilmington, N.C., Executive Chef Kevin O'Connell put his food purchaser and receiver through an intensive training course on how to buy and receive seafood.

"We're on the coast and we sell a LOT of seafood," he says. "So it's imperative we know how to gauge quality and what questions to ask our suppliers to ensure we're getting top goods."

With hundreds of species from hundreds of sources around the globe, you have to depend on your supplier to be your gateway.

Tricks of the Trade
"Our system doesn't rely on everything being right from the source," says Fred Kunder, vice president of ASC Seafood, Largo, FL "When fish come in, we verify species, do a glaze analysis, reweigh and repack. Kunder says such procedures are necessary for a lot of reasons. Take glazing. Glaze is a quickfreeze coating through which freshly caught whole fish are run to help retain freshness and prevent freezer burn.

"When we do a glaze analysis on whole fish, we're looking for about a 4% glaze," says Kunder. "If you've got a 10-lb. case with a 4% glaze, the contents better weigh 10.42 lb. Otherwise you're paying for glazeandyou can't sell glaze."

"You also can't sell plastic wrap, packing ice or cardboard," adds O'Connell. "The first thing I bought for the club was an $800 scale and I taught my guys to stop, wash their hands and start weighing when the fish comes in."

Suspect Species
Mislabeled species is another issue. Whether intentional or not, you don't want to be paying higher per-pound prices for lesser quality.

"The problem is that a lot of fish are really tough to tell apart when they're whole, never mind in filleted form," says LeeAnn Applewhite, CEO of Applied Food Technologies (AFT), Gainesville, FL. Any one can fillet a fish to look like another, more expensive, species, she says.

But Applewhite's company is working on a solution. Last fall, AFT was asked to take over doing protein analyses of the fish inventories of foodservice distributor U.S. Foodservice after the National Marine Fisheries Service (NMFS) labs doing the work were damaged by Hurricane Katrina.

Applewhite says she suggested using DNA analysis instead of the older technology NMSF had used "because it leaves no room for error in identifying species.

"We originally developed the technology to discern Atlantic Blue Crab from Asia Blue Swimming Crab," Applewhite explains, "and the identification process has grown from there."

AFT has developed "DNA markers" for grouper, five tuna species, catfish, basa and tra ( inferior species often mislabeled as grouper). among others. It's also developing a marker for real red snapper that, at $2 to as much as $4 a pound more expensive than other snapper varieties, is one fish you really want to be labeled correctly.

"US Foodservice is requiring that its suppliers work with us for species identification," Applewhite says.

"DNA identification verifies absolutely that you're getting what you paid for. From there you can determine if you're working with a reputable source."

Check It Out!
So, once you've established that the seafood you're buying comes from a reputable source, you're job's done, right?

Wrong, says Chef O'Connell. "Seafood quality can take a dive once it reaches the end customer." When he trained his purchaser and receiving agent at the country club, he impressed upon them the need to handle the seafood shipments with care.

When the shipment comes in, the receiver uses the following guidelines.

Smell: Fish should have a clean freshwater or ocean smell. The very first whiff you get upon opening the plastic wrap is the best indicator of freshness.

Sight: O'Connell looks for bright red gills and belly cavities that are completely free of guts and nicely trimmed. "Watch out for belly flaps," he warns. "That's a good trick when you think you're buying trimmed fish—it steps up the weight, but it's not usable." Eyes are another visual freshness cue. "Eyes go cloudy and gray in about two days," O'Connell says. Look instead for eyes that are bright, clear and not sunken.

Touch: Whole fresh fish should have smooth, firm surfaces; gills should NOT be slimy. Make sure frozen fish arrives frozen. "If the fish is hard and frozen, but you can shake it around in the case, that's good," says ASC Seafood's Kunder. "If it's all frozen but stuck together, that's bad. It likely thawed and was refrozen."

The next step is weighing. "Don't accept a shipment of fresh or frozen product without weighing it to verify you're getting the amount you pay for," says O'Connell. "I've had instances where the weight includes ice and packaging." Lobster tail can be notorious for extra glaze.

Store seafood quickly and properly. "When you're storing seafood, do not expose the flesh directly to ice or water," says O'Connell. "That accelerates decomposition." His crew fills leak-proof zipper-lock bags with ice and lays them on top of the fish in the coolers. "We lay fish out with drip pans below and bagged ice on top. It's good to get rid of the juice or purge—you do not want your fish sitting in liquid."

One exception is frozen shrimp. "I keep a pull list for the freezer to remind the staff to take shrimp out to thaw overnight in their bags and in their juices in the cooler," he says. "Rinsing the shrimp under cold running water is a big mistake."

Finally, ask your supplier when he or she got the fish, so that you know how many days you have to serve it. Make sure you've got some method of marking a use-by date on the containers.

Question/Learn from Suppliers When you're dealing with seafood suppliers, you can show your savvy by asking the right questions. If they're more than willingto answer your questions and make the effort to actually educate you, it's a good indication they're reputable. O'Connell even asks his suppliers to train his chefs on trimming and filleting. "They deal with it every day, they're perfect teachers," he says.

"A good supplier wants to share information because it's in his or her best interest to keep you satisfied," says Susan Shebilske, fresh fish buyer at The Seafood Center, Madison, WI.

When you're dealing with suppliers, you should want to know the following:

A final point concerns price. Safe handling, quality, species verification and correct weights all cost money. If you're offered seafood at what you would call a "remarkable price," it'll be remarkable if the seafood is what it claims to be.

"I had to laugh when I saw grouper in a Wisconsin grocery store for $9.99 a lb.," says Shebilske. "I had just received a shipment and it cost me $14.95 a lb. at wholesale. Whatever it was, it wasn't grouper."

Only a good supplier can protect you from a bad buy.