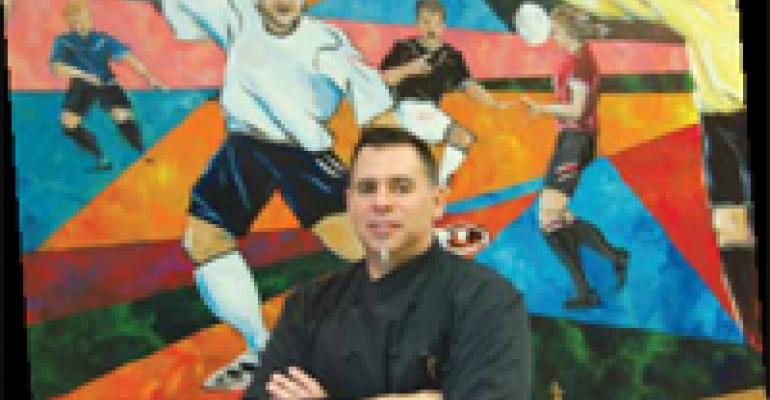 When Ken Sherepita worked in the commercial restaurant world, he was one of the chef stars of the Cleveland culinary scene. As head of catering for one of the market’s most prestigious outfits (Sammy’s), as executive chef of one of the city’s most celebrated new restaurants (Pickwick & Frolic) and as chef for the Restaurant Associates and Levy Restaurants catering operation at Cleveland Browns Stadium, he moved among the movers and chefed for the shakers of the city’s elite and their guests.

Today, his life is a little quieter, and definitely less hectic. That’s because last summer he acted on an impulse and took a job he never imagined he would seriously entertain: chef for Premier Soccer Academies, a local boarding academy for talented teenaged soccer players from around the world (for more on this unique institution, go to www.premiersocceracademies.com).

At Premier, Sherepita currently runs a one-chef show, preparing meals and snacks for 19 resident boys and the adult staff, some of whom board at the school. Next year, when the enrollment is expected to bump up by another seven or eight students, he is considering adding a pair of interns from local culinary programs to help out while getting real-world experience.

His work will also expand once the facility’s new stadium is completed later this year. He will manage concessions and suite catering for venue, which is expected to seat up to 5,000.

But for now, his days are filled with ensuring that the nutritional needs of a score of highly active teenage boys (the age range at Premier is 12-17), coming from a variety of homelands, are adequately met.

When did you become interested in cooking?
When I was in the third or fourth grade, I happened across a cartoon book called Mulligan’s Stew that had a recipe for actual Mulligan stew. I made it for my family, and it was a really good feeling to have somebody appreciate what you cooked. Then, when I was nearing the end of high school, I got a summer job in a local restaurant called Houlihan’s. I stayed and ended up becoming the chef there. After I left I knocked around for a while before ending up at Sammy’s. Later I opened Pickwick & Frolic and ran it for two years before the hours got to me.

Is that when you joined RA?
Yes, the position at Browns Stadium was similar to what I’d done before—lots of catering and logistics. What I really liked was that they let us do a Cleveland style menu with localized foods without a lot of dictation from above. It was a perfect fit for me.

What was your most memorable event there?
That’s easy—the Five Star Sensation, for which we were the host kitchen this past year [Editor’s Note: Five Star Sensation is a biennial culinary fundraiser chaired by Wolfgang Puck to benefit University Hospitals’ Ireland Cancer Center in Cleveland]. There were 35 chefs from all over the world who used the Browns Stadium kitchen as the prep site. By the way, the first Five Star Sensation, in 1987, was held at Sammy’s.

How did you end up at Premier?
They were thinking of bringing in a management company like Compass. My name came up since I’m local and was working for Compass at the time. I was open to a discussion but, honestly, I thought it would just be one discussion. I don’t know anything about soccer and didn’t think it would be something I’d be interested in.

So, what convinced you?
Basically, the whole concept. It’s something that has never been done here in the U.S. There are some similar academies in other countries, but mostly for those who can pay, while we are a nonprofit. So it was a chance to impact young lives. The students come both from around here and from around the world. We have international players from Mexico, Venezuela, Brazil, Zambia and South Africa. The goal is to get them to the next level after they’re done here: to sign a pro contract or get a scholarship to college.

And your role is…
Well, I take an active part in the students’ lives, since they live here. The meal and menu processes are very interactive. For example, they get to design the menu on their birthdays. Some even go shopping with me for the ingredients and then help prep with me in the kitchen.

Do you try to re-create the foods that the international students are used to?
Yes, but the best way is to talk to the parents rather than look up recipes, which may taste different from what they’re used to.

I guess you also talk about good nutrition.
Of course. The students here are very motivated and want to have long careers. To do that as a soccer player, you have to take care of your body, and that includes eating right. Right now, they are growing fast and burning a lot of calories

So obesity is not a problem...
Definitely not. Their schedule is so packed with energy-burning activities that getting fat is really not a concern. The “fattest” player we have has 13 percent body fat. We call him “Chubby.”