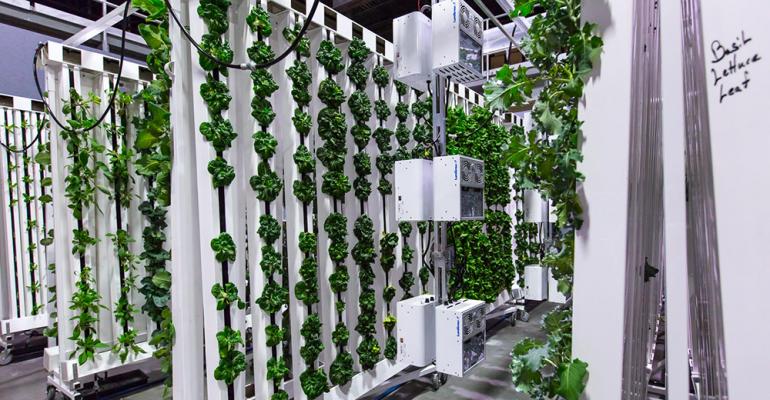 By putting the greens-producing racks on wheels, Missouri State’s dining department can transport them to dining stations and catered events where they convey a dramatic message about freshness.

How does your garden grow? At Missouri State University (MSU), it’s vertically and, occasionally, even peripatetically.

The school’s dining services department, which is managed by Chartwells Higher Education, originally deployed a set of ZipGrow towers in January 2016 to grow a variety of crops in vertical hydroponic and aeroponic beds.

The towers, which are produced by Bright Agrotech Co. in Laramie, Wyo., caught the attention of MSU’s Students for a Sustainable Future organization, which was so impressed that they wrote a proposal for funds to expand the program.

The result is that the department now has 96 towers divided equally among six racks. Each rack measures about eight feet in width, seven feet in height and 2.5 feet in depth.

The creative thing about the towers is that they are mobile and can be wheeled to dining sites to provide a vivid visual component to a fresh food/sustainability message.

Most of the towers are kept in a formerly unused basement grow room, but two racks are kept in MSU’s two major dining centers so that chefs can harvest hyper-local produce from them in-house and students can see the towers. They are tended by two interns selected by the university’s agriculture department.

“They are right at the station,” says Nicole Young, marketing director for Chartwells at MSU. “We feel it’s much more of a wow factor for guests to see us harvest the produce right as it’s used.”

Originally, the mobile towers were used only in the regular dining venues, but then Chartwells Senior Executive Chef Quintin Eason decided to showcase them as the backdrop for a live juice bar at a catering showcase, and that led to the selling of a number of catering events based on that idea alone. Since then, the idea has expanded to include live salad harvesting toss stations using the units.

The mobile towers can be loaded onto catering trucks to be transported to various sites around campus. Currently, they are featured in only about a dozen catered events a year, but the number is growing as awareness of them grows, Young says.

“We’ve gotten amazing response from our guests as well as the local community,” she notes.  “It’s a very cool experience that really allows us to bring new meaning to the term farm to table, when we can in fact bring the farm to someone’s table.”

The ZipGrow units primarily grow herbs and lettuces, though this can change based on variations in menu demand. They also grow custom items for future catering events as well as rare heirloom varieties.

Each individual crop takes up four to eight towers in order to provide enough yield to keep locations from having to order from a third-party supplier. Yields depend on the item.

“We try to do research and select plants that will provide the highest yield possible, but in many instances this can be a case of trial and error,” says Eason. “On average, however, plants grown this way go from seed to harvest about three to six weeks faster than plants grown in traditional methods, so we are seeing double the yield that we would if grown with traditional methods.”